By Unknown - April 30, 2017
On Saturday, April 8th, I sat in my seat at Camden Yards in a state of shock. After casually fouling a ball straight back into the stands, Gary Sanchez grimaced and I knew something was horribly wrong. He was promptly removed from the game. At this moment, I thought the season was over. Little did we know that this Yankees team was on the verge of turning a corner. Much of the Yankees resilience should be attributed to Austin Romine. While filling in for the injured Sanchez, Romine has performed more than admirably, exceeding pretty much anyone's expectations. Though already well regarded for his defense, and he certainly has not disappointed in this regard, Romine has improved drastically with the bat. The Yankees will definitely be happy once Sanchez returns, but they have not missed a beat in his absence. 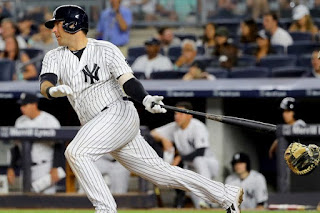 Austin Romine has come a long way since his major league debut in 2011. Heading into the 2009 season, Romine was listed as the Yankees' fourth best prospect. After serving as the backup catcher for most of 2013, Romine lost the spring training competition for the same spot in 2014. Though he was called up at multiple times throughout the course of that season, he only managed to play in seven games. Romine's stock hit an all-time low in 2015 after he was designated for assignment by the Bombers in early April. Though he'd quickly find his way back to the only professional organization he'd ever known, it was tough to imagine the former-top Yankees prospect would ever make a consequential impact on the major league club ever again.

In 2016, Romine beat out Gary Sanchez in spring training for the club's backup catcher role. As the backup, Romine played in 62 games, hitting .242 with four home runs and 26 RBIs. For a backup catcher who plays above average defense, the Yankees could not have been any happier with Romine's performance. After Sanchez's historic arrival to the big leagues forced Brian McCann into the designated hitter/back up catcher role, Romine saw a drastic decrease in his playing time.

Heading into 2017, Romine was the favorite to win the backup catcher job over Kyle Higashioka. He proceeded to win the job he had performed so well in the year before. With McCann traded to the Astros and Sanchez poised to be the Yankees star catcher of the future, it appeared that Romine would have the backup catcher position locked down for the foreseeable future. On April 8, 2017, Romine was provided with an opportunity that may very well have changed his career trajectory.

Once the Yankees announced that Sanchez's right biceps strain would warrant a stint on the disabled list for the star catcher, Romine was tasked with filling in for the player who for all intensive purposes is considered the future of the Yankees organization.

Initially, most fans and analysts expected Romine to continue playing superb defense. Any offensive production would have been a plus, even though the Bombers weren't necessarily expecting him to do much with the bat. I can't believe I'm saying this, but the Yankees have not missed Gary Sanchez one bit. Immediately after Sanchez's injury, the Yankees started click on all cylinders. After getting off to a 1-4 start, the Yankees righted the ship. The Bombers have went 14-3 in Sanchez's absence. Again, I'm not trying to imply that the Yankees are not looking forward to his return, I'm simply emphasizing that Romine has been crucial to the club's turnaround. 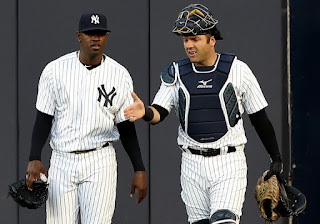 The pitching staff seems to love pitching to Romine. The starting rotation that many, including myself, once referred to as an unmitigated disaster is actually shaping up quite nicely. Most, if not all, of the relievers have done their jobs for the most part. Masahiro Tanaka, Michael Pineda, and Luis Severino have all improved with Romine behind the dish after getting off to horrid starts. Jordan Montgomery has also had an impressive transition to the majors while pitching to Romine.

As previously stated, the defensive contributions were to be expected. Offensively, Romine has provided the Yankees with a potent bat at the bottom of the order. In 50 at bats, Romine is batting .300 with 2 home runs, 10 RBIs, and an OPS of .799. For a player not known for offensive contributions, this is pretty significant. As of late, the Yankees have been clicking on all fronts. With the notable exceptions of Greg Bird and Brett Gardner (although the latter did have two home runs this Saturday), the offense has done its job. Romine has fit in nicely with the rest of the Bombers' lineup.

Romine's impressive start is much more significant than his impact on the club's 2017 prospects. Though these past few weeks are a small sample size, Romine is showing that he is capable of being an every day catcher. Not only has he flawlessly handled the pitching staff, but Romine's offensive improvement may have enabled him to make that final step. For the duration of 2017, we'll likely see Romine continue to excel in the backup catcher role. Barring another major injury to Sanchez following his imminent return, Romine will see a drastic cut to his playing time. Since Sanchez is the Bombers' catcher for years to come, they may want to consider shopping Romine this offseason. He should be able to fetch the Yankees a decent return based on his performance thus far. This is a bit far ahead, but it's important to keep these things in mind.

Gary Sanchez will likely be back in a week. While I, and all Yankees fans, are looking forward to the return of the player who helped usher in the invigorating youth movement, we have to sit back and appreciate all that Romine has done these past few weeks. The Yankees early season success, in spite of their 1-4 start, has been exciting to watch. Without Romine, such a turnaround may not have occurred. Knowing that the Yankees have the depth to survive an injury to one of their best offensive players is reassuring. It's early, but this team looks good. They may be the most exhilarating Yankees squad in a long time. I'm happy that Austin Romine is a part of this ride because he's certainly proven his utility.