By Unknown - April 17, 2017
On a bi-weekly basis I will be providing an update of the Yankee’s top prospects in the format below. My goal is to monitor and analyze the development of our newly acquired young players throughout the ups and downs of the long baseball season. As we all know, it’s been quite some time since the Yankees had this type of powerful minor league program, so I want to make sure I cherish the opportunity to cover them and bring as much light to these players as possible to our loyal readers. Enjoy. 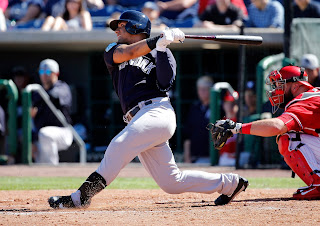 1. Gleyber Torres SS  – Torres has now successfully bounced from the Arizona Fall League, Spring Training, and now the Double-A Trenton Thunder without missing a beat. The top dog in the farm system was batting .355 with a ridiculous .501 OBP after the first week of the season. Since then he has come back to earth, but his numbers are still impressive. His OBP still sits at an impressive .366, which means although his average has dropped significantly this week, he is still finding ways to get on base. He has yet to leave the ballpark but does have two doubles and a triple to his name. The Thunder has implemented a schedule where Torres will rotate position between third base, shortstop, and second base on a moving schedule. As far as development goes, it seems like the Yankees have put in a lot of effort to cultivating his talent and he is destroying every challenge put in front of him.

2. Clint Frazier OF – After a solid opening series, Frazier has cooled off a bit. In an extremely small sample size Frazier’s average is a bit lower than you’d expect, but again it’s a small sample size and he’s had some quality at-bats. He is also yet to leave the yard and this is a bigger issue for Frazier than Torres. Developing that power will be crucial to Frazier’s game and it is certainly something to keep an eye on.

3. Blake Rutherford OF – Rutherford has flown under the radar a bit because he was not part of the youth movement in spring training. This has nothing to do with his ability, but with his age and experience. I predict that Rutherford will soon overtake Frazier as the number 2 prospect in the system and will quickly snatch the number 1 spot as soon as Torres moves on to the Major League club. Rutherford absolutely raked through the first week of the season batting .421 with an OBP over .500. He cooled off a bit during week two, but he is showing the world why he was widely considered the best hitter in his draft. 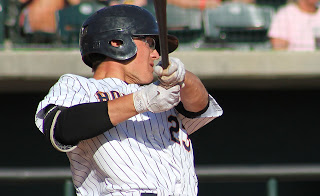 4. Aaron Judge OF – After a bit of a clumsy start Judge has settled in nicely. In just 11 games we have seen three monster home runs (should have been four), 1 double, and 1 triple. His strikeout rate could use some improvement, but it is certainly an upgrade from last year. His approach has been much better and it would be nice to see him bring his average up a bit, but you can live with it considering his power numbers. He has also played a solid right field and does not seem to be overwhelmed whatsoever in his first full year in the Majors.

5. Jorge Mateo SS – The issue plaguing Mateo’s career thus far has been his maturity. After a solid Spring Training, Joe Girardi praised Mateo’s growth as a player both on and off the field. That momentum seems to have carried over into the start of the season. Mateo has gotten off to a red hot start at the plate, batting over .300 and sports an OBP of  nearly .400. The key stat here is Mateo’s nine stolen bases in just 10 games. Speed is a huge part of Mateo’s game and it is important he utilize it. Moving forward he must increase his power. With his speed he does not need home run power, but power to the gaps, so he can rack up doubles and triples.

6. James Kaprielian P – Horrible news to start the season this year for Kaprielian. He is yet again being put on the disabled list for elbow issues, this time for Tommy John. With a roughly 18-month recovery, we may not see Kap until 2019. We can only hope he will bounce back and be the same pitcher.

7. Justus Sheffield P – After throwing some solid innings in spring training Sheffield was assigned to the class Double-A Trenton Thunder. He continued his lights out ways, tossing 5.2 innings of scoreless baseball in his debut. So far, so good for Sheff. His development has been on a steady pace since being acquired last year.

8. Chance Adams P  – Everyone’s favorite surprise of 2016 has continued his success into 2017. Over two starts and 11.1 innings Adams has given up just one run. Adams continued success would certainly be welcomed by the pitching needy Yankees. 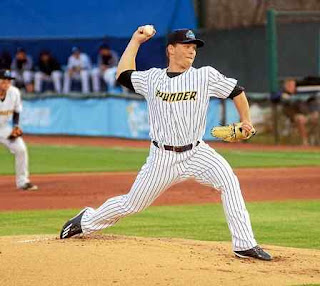 9. Dustin Fowler OF – Fowler has stumbled out the gate in 2017 with an average below .200. On the bright side he has two homers, one double, and one triple in just nine games. I mentioned this in the off season and I’ll say it again, assuming Fowler brings his average back to normal (.275ish) and continues his development on power hitting, he will be a VERY solid Major Leaguer. His above average defense and versatility make him an asset any team would be lucky to have.

10. Miguel Andujar 3B – Talk about a TORRID start, Andujar has absolutely raked in 2017. In his first four games he had two homers, 1 double, and 1 triple. Since then he has cooled off but Andujar is making sure he is not the forgotten man in the Yankees farm system. 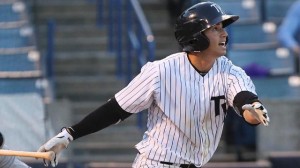 Tyler Wade INF- It was a bit disappointing when the Yankees decided to keep Pete Kozma in the majors and demote Wade after Didi Gregorius went down with a shoulder injury. That hasn’t stopped Wade from producing. In his first nine games Wade is hitting .400 with four stolen bases.

Albert Abreu P – In his one appearance this year Abreu went four innings and struck out six batters. He gave up only one earned run that came on a solo home run. Abreu currently place for the Charleston Riverdogs in the A level.

Stud of the week
Miguel Andujar
It came down to Andujar and Rutherford, but in a tight one I’m going with Andujar. He has the power numbers to go along with the average. Amazing starts from both young bombers though.

Dud of the week
James Kaprielian
I really hate to do this because it is strictly due to injury, not performance and I’m a huge Kap guy, but there is no other choice. Going on three seasons and we haven’t seem much from Kaprielian due to injuries. I really hope he doesn’t become a case of “what could have been.”