How does Jordan Montgomery compare to past Yankees rookie pitchers?

By Unknown - April 16, 2017
The New York Yankees are in a stage that most fans have never witnessed. The “Evil Empire” that is known for going all out on opening their check books to lure in the respective year’s most coveted free agent is in the midst of a youth movement. The phrases “rebuilding” and “waving the white flag” have commonly been used to describe the overhaul that has been occurring over the past eight or so months. “Retooling” is the description that the Yankees’ front office has used to label their recent transactions. The team still consists of veterans who are being paid for their past contributions more so than their current ones, however, the Yankees are more reluctant than ever to give the kids in the farm system an opportunity to be significant contributors to the major-league club. One of these kids is rookie left handed pitcher Jordan Montgomery. 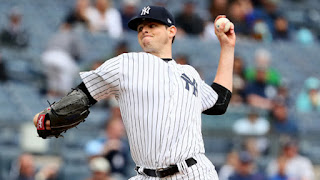 Montgomery was the dark horse in spring training to crack the rotation. He had no big-league experience and despite good numbers, had no eye-popping pitch. He turned enough heads to be granted the fifth starter job a week earlier than the Yankees anticipated announcing the winner of the job. They elected to hand Montgomery the ball and give Masahiro Tanaka an extra day’s rest. Montgomery did not disappoint having a final line of 4.2 IP, 5 H, 3 R (2 ER), 2 BB, 7 K, and 1 HR in his MLB debut.

Montgomery had complete control of the mound and was not distraught by a first inning mistake to Rickie Weeks Jr. that ended up in the left field seats. It is safe to say that Montgomery will be given more opportunities to prove himself and may start a precedent for more Yankee rookies to be given opportunities to pitch out of the rotation. Yankee fans know it’s not every day we see a young pitcher donning pinstripes throwing out their first major league pitch atop the mound as a starter. So how did Monty’s first start stack up against past Yankee rookie pitchers and what is his outlook? Here are three notable first outings and how the respective pitchers’ careers have fared:

Chase Wright is probably the least household name on this, but nonetheless is significant. Wright was the last left-handed pitcher, before Montgomery, to make his debut as a starter. Wright was a third-round pick in 2001 and made his debut in 2007 due to injuries to numerous Yankees starting pitchers. He allowed three runs in five innings and picked up the victory against the Cleveland Indians, earning him another go around in the rotation and overall praise. Similar to Monty he shined in the minor leagues the season before. However, his moment of fame was more like a one-hit wonder as he allowed four straight homeruns to the Red Sox and was demoted in favor of the next pitcher, Phil Hughes. Wright was called up to pitch one more game in September out of the bullpen and has not pitched in the major leagues since. Montgomery will most likely not have this happen to him, but it goes to show how unpredictable baseball is. 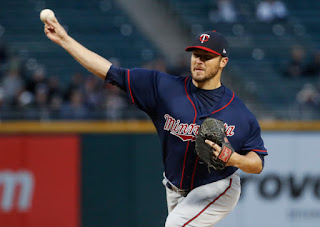 Phil Hughes had more of a prospect label on him than Wright and his debut was much anticipated. On April 26, 2007, he was given the ball against the Toronto Blue Jays with high expectations. However, the results were not there. He allowed four runs in four and one-third innings and the Yankees did little to help him as AJ Burnett shut down his future team. Unlike Wright, Hughes would be a factor for much of the season and still is a quality major league pitcher, even holding a record for strikeout to walk ratio. Montgomery also doesn’t have the top prospect label that Hughes once held, but it would not be surprising to see him have the longevity in his career that Hughes has been able to achieve. Hughes’s problem throughout his Yankee career was consistency so Monty will look to be a reliable starter and anchor himself in the Yankees rotation.

2007 was the year of the rookie for the Yankees rotation as along with the aforementioned pitchers and everyone’s favorite Kei Igawa, Clippard also made his major-league debut on May 20, 2007. Clippard pitched phenomenally going six innings allowing a single run against a New York Mets team who was 28-14. Clippard struggled for the rest of the season amounting an ERA above six and was traded to the Nationals that offseason for Jonathan Albaladejo. Clippard would then find his big-league niche in Washington as a late inning reliever where he has thrived ever since. The Yankees reacquired him at last season’s trade deadline to solidify their dismantled bullpen. When Clippard was traded from the organization he was drafted by in 2007, the last thing he probably could have imagined is pitching for them ten years later as one of their go to relievers. 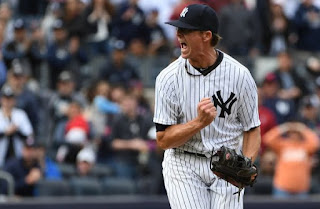 Wright, Clippard, and Hughes all had extremely different first outings and very diverse career paths. Jordan Montgomery has one start under his belt and he made a fantastic first impression, but as these pitchers' careers depict, nothing can be predicted. Montgomery could make one more start and never pitch again. He could go on and be a league average starter for many years. He could also be trade bait and reunite with the Yankees after his career is set in stone.

One thing that the Yankees desperately desire is to develop a reliable starter that could be a staple in their rotation for years to come. This has been a struggle for the Yankees over the years but this youth movement is a very promising start for the team. Montgomery could very well be that guy, but only time will tell. A pitcher’s first start tells a lot about what kind of pitcher he will be for the team, but is not a viable predictor of his career to come. Montgomery makes his next start this Monday against the Chicago White Sox.