By Unknown - April 22, 2017
After losing the first game of the road trip, the Yankees took advantage of the Pirates’ bullpen for a 11-5 comeback victory. The Yankees used a five-run sixth inning to knock out starter Jameson Taillon, then put the game out of reach when Chris Carter finally made himself useful, and hit a three-run bomb. Aaron Hicks and Chase Headley tacked on back-to-back doubles in the eighth inning to remove any measure of doubt of a Yankees win. Oh, and Aaron Judge hit another home run in the ninth inning because he’s Aaron Judge and that’s what Aaron Judge does. 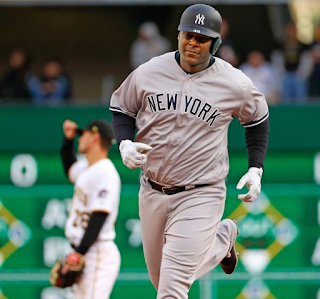 
After Michael Pineda retired the first two batters of the first inning, Andrew McCutchen set the tone and took Pineda deep to left-center field for a home run. Pineda gave up another home run to 2011 World Series MVP David Freese in the fourth inning, and gave up a third run in the fifth inning on a sacrifice fly.

The Yankees finally got on the board in a big way during the sixth inning. After an infield single by Jacoby Ellsbury and a walk by Aaron Hicks (who is making a case to be the everyday left-fielder over Brett Gardner), Starlin Castro launched a ball over the left-field fence to tie the game. Aaron Judge followed up Castro by barely missing a home run, Greg Bird got hit by a pitch, then Austin Romine blooped a ball over short to load the bases. Ronald Torreyes, determined not to let Starlin Castro create a large gap in the Yankees’ list of RBI leaders, hit one to right field and drove in two more. 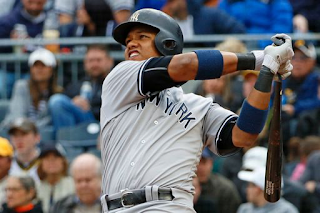 However, the lead didn’t last long. Jonathan Holder gave up an RBI single to Jordy Mercer, then was replaced by Tyler Clippard. Clippard got out of the inning by striking out Josh Bell, but only after Adam Frazier tied it with an RBI single of his own.

The game remained tied until the Yankees broke the game open with a five-run two-out rally in the eighth inning. Romine reached on an E4, Torreyes singled, then Chris Carter FINALLY hit a home run to make it 8-5. Ellsbury reached on another error by McCutchen, then scored on a wild pitch to make it 9-5. Aaron Hicks doubled, then Chase Headley doubled him in to make it 10-5. Pineda threw 47 strikes out of 73 pitches and was overall not terrible. His outing was cut short because of National League rules. Pineda could have gone out for the sixth inning but was pinch-hit for by Matt Holliday during the sixth inning rally.

As for the bats, Castro continued his clutch hitting, Aaron Judge mashed ANOTHER home run in a meaningless ninth inning at-bat (he is MUST-WATCH TV), and Ronald Torreyes is making me anxious about taking him out of the everyday lineup with a great 4-for-5, 2-RBI outing.

The Yankees will give the ball to Jordan “Gumby” Montgomery for a chance to take the series. The Pirates will throw out a familiar face, Ivan Nova, who has been outstanding since joining Pittsburgh.