By Spencer - April 26, 2017
After being rained out last night, with a doubleheader rescheduled in July, the Yankees will begin a short two game series in Boston this Wednesday. The greatest rivalry in baseball will take place as the 11-7 Yankees face the 11-8 Red Sox. The Red Sox won the season series in 2016, winning 11 of the 19 games, including going 8-2 at Fenway Park, which included two series sweeps. 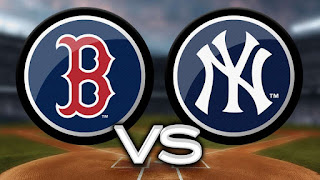 Unlike his counterpart Porcello, Severino has actually done quite well with the amount of baserunners he allows, pitching to a 0.80 WHIP in his first trio of starts. It’s pondering how dominant his stuff has been and the limited amount of hits and walks he’s allowed, while still not producing that great of stats. It’s been the home-run ball that’s hurt Sevy greatly, as all but two of his runs allowed have been from the deep ball. His 27 K’s in just 20 IP is good for seventh in the AL to point. The distance, thanks in large part to his pitch efficiency, has been helpful in keeping the bullpen relatively rested on his starts.

As predicted by many around baseball, Porcello has followed up his 2016 Cy Young campaign with a measly start to this season. Arguably one of the worst winners of all-time, Porcello has struggled to regain his form after going 22-4 with a 3.15 ERA. His four stars have been quite erratic thus far, as he’s allowed 31 hits in 23.2 IP. He started off with an average start against Pittsburgh, following that up with another quality, yet rather pedestrian start against Detroit. Each of these two starts he allowed three runs, but there was a combined 17 hits off of him in those two games. He hit rock bottom against Tampa Bay, allowing eight runs, including four home runs. His strongest outing to this point was last week against Toronto, lasting a season-high seven innings and allowing three runs, while none of them were earned. Meanwhile, he made three starts against the 2016 Yankees, pitching at least seven innings in all three instances. In 22 combined innings, he allowed five runs, a 2.05 ERA, against the division rival.

Tanaka has been nowhere near his 2016 self, but is coming off a start against Sale’s former team where he showed strides of breaking out of his early season struggles. The struggles come as a slight surprise after his dominant Spring Training. His seven-inning, one-run outing was much needed, as the Yankees need him to perform like an ace this season with the ever-so inconsistent Michael Pineda and rookie Jordan Montgomery in the rotation. Tanaka has not been good with command, having allowed at least two walks in all four starts. If Tanaka gets going, this Yankee team will be very dangerous with the potential to compete for not only a playoff spot, but possibly the AL East race.

While many aces have struggled out of the gates in the 2017 season, including two in this series, Sale has exceeded expectations for Boston. Acquired in the offseason for a few prospects, including Cuban superstar Yoan Moncada, Sale has been the best pitcher in baseball without a doubt. The offense behind him has been putrid though, as he continues to not get any run support. He has gone at least seven innings in all four starts, while racking up 42 K’s en route, six more than anyone else in the majors. In those starts against the Pirates, Tigers, and two division foes, there’s been just 15 hits and three runs against him, a cumulative sub-one ERA. Sale has been well worth the price Boston paid for him and expect him to continue the dominance against a rather young New York lineup.


Keys to the series for the Yankees:

Greg Bird followed up a 3-for-3 performance against the Cardinals last Sunday with a .053 average over the course of six games this past week. His one homer on the season has been the total opposite of how he performed in the preseason, when he hit seven long balls. Obviously his performance deserves a benching, but backup Chris Carter hasn’t been much better. His pinch-hit, three-run homer against the Pirates on Saturday has been about the only highlight of his season. His average is at .207 in 29 ABs with just one homer as well. The play has to start concerning manager Joe Girardi, as we are now 20 games into the season. The struggles must turn around if the Yankees hope to contend.


Continued excellence from the bullpen

Over the past few seasons, the Yankees have been known for having the likes of Andrew Miller, Aroldis Chapman, Dellin Betances, Tyler Clippard at the back end of their bullpen. This season though, the Yankees rank first in the majors in ERA, showing the depth that they have improved on. Other guys, such as Bryan Mitchell, Adam Warren, Tommy Layne, and Jonathan Holder, have stepped up greatly. Meanwhile, the trio has lived up to the hype, despite some inconsistencies this season. Betances, in particular, has had continued struggles with his command. He has pitched to a 1.33 WHIP in six innings so far, while striking out nine. Chapman has been his usual Cuban-missile self, allowing zero runs and constantly wowing hitters with his velocity in the triple digits. The third and forgotten about member of the best bullpen trio in baseball, Tyler Clippard, has continued improving on his filthy changeup. The two-time All Star has 12 strikeouts in 7.2 innings out of the ‘pen. The late hot streak and improved efficiency from the pitchers had made the bullpen pitch just 51.2 IP so far, third-fewest in baseball. Their cumulative ERA of 1.39 by far ranks first, as does opponent’s batting average (.172).

Keys to the series for the Red Sox:

Get Porcello on track

With David Price having disappointed last season and now likely out for a few months, if not the whole season, the Red Sox’s rotation depth certainly took a hit and will need someone to step up. If Porcello regains his magic though, the Red Sox will have a deadly duo at the top of their rotation. Although early mentioned as being an “overrated” Cy Young award winner, Porcello is still a very good pitcher in this league, especially if he’s second in your rotation. He has also had the advantage of, unlike Sale, having good run support from the explosive offense.

Continue pairing the three B’s together

Mookie Betts, coming off an insane, breakout 2016 season, has picked up the pace after a putrid start. He will continue to improve and more-than-likely contend for the AL MVP award once again. Andrew Benintendi is coming off a 5-for-5 performance on Sunday that pushed him into third in the AL in batting average at .347, just behind Yankee Starlin Castro and Avisail Garcia from Chicago. The top prospect in all of baseball hasn’t disappointed and has made their offense even better. Last, but not least, you have Xander Bogaerts leading off, one of the premier shortstops in the game. In the series finale against the AL-East leading Orioles, the Red Sox paired the three B’s together, Benintendi, Betts, and Bogaerts. The results, as expected, were incredible, as the top three combined to have nine hits in 12 at-bats, four runs scored, and four RBIs. The trio, all with massive upside, all hit in the .300’s, have very good speed, above-average power, and solid defense. Yes, it’s just a one-game sample size, but it displays the potential of having this trio at the top of the lineup. With Pedroia out, this should be an obvious lineup choice for manager John Farrell.

While not having any big names in their bullpen, excluding former Brave Craig Kimbrel, Boston ranks third in the majors in bullpen ERA at 2.21. This is without offseason acquisition Tyler Thornburg from Milwaukee, who enjoyed an 8-5 record, along with a 2.15 ERA and 90 strikeouts in 67 innings. Thornburg was atrocious in the spring though, as he pitched 1.1 innings in two outings, allowing seven hits and nine runs (seven earned). That continued from a rough end to last season, when he allowed a run in each of his last four outings. Heath Hembree and former starter Joe Kelly have been the unsung heroes of the bullpen, as their combined 22 innings of work has only resulted in four runs. The bullpen likely won’t sustain these type of numbers. This was the obvious weakness of the Red Sox heading into the season and although they likely won’t sustain these type of numbers, if they continue to pitch well they will make Boston even more of a dangerous team.

Both teams are coming off of series losses this past weekend, each having lost two of three. The Yankees hot play came to an end in Pittsburgh, while Baltimore continued it’s first-place baseball by beating Boston the first two games of the series. With an unhittable Chris Sale and another lefty in Drew Pomeranz, look for for a series split.