By Unknown - April 06, 2017
The Yankees head to Yankee Stadium South (Camden Yards) for the second series of the year with the Baltimore Orioles. While the Yankees are coming off a somewhat disappointing series loss to Tampa Bay, Baltimore is 2-0 after sweeping a short series from the Blue Jays. Baltimore was able to hold the Toronto offense to just three runs over two games and saw a walk of home run from Mark Trumbo in the 11th to win the first game of the series. 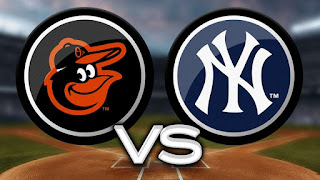 At one point during the off-season I wrote that Luis Severino is one of the biggest variables and most important pieces on the entire Yankees roster. We’ve seen flashes where Severino is downright unhittable, both as a starter and reliever. Then at other times we’ve seen him implode and look as if he has no right being on a major league team. If you dissect his appearances, they all almost go one way or the other with no in between. The Yankees desperately need him to trend upward to give their lackluster pitching staff a much-needed boost. Severino’s numbers get much worse as he allows early base runners in innings, which is why it’s crucial he gets ahead in counts early and relies on his defense behind him. Historically, with the little experience he has, he has struggled more vs. right handed hitters. This could be an issue considering Baltimore has a plethora of right-handed studs including Manny Machado, Adam Jones, and Mark Trumbo. On the flip side, Ubaldo Jimenez has given the Yankees trouble in the past. They didn’t face off last year, but in 2015 he went 2-1 versus the Yanks with a 3.81 era. 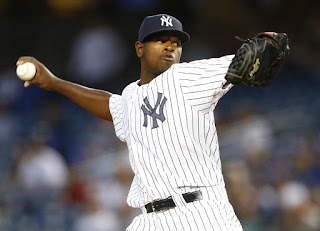 Tanaka is coming off a disaster first start where he gave up seven runs, which is the most since his short major league career began in 2014. Tanaka’s big issue is locating that sinker. I’m not sure what the issue is, but his “out” pitch was his undoing on opening day. Time and time again he left that pitch up and hitters had a field day teeing off on the hanging breaking balls. As lethal as a pitch his splitter is when it’s on, it quickly becomes an opposing teams best friend when it isn’t executed properly. Tanaka doesn’t pump the radar gun like some of these others team’s aces, so it’s important his control is pinpoint for every pitch in his repertoire. Tanaka has owned Baltimore’s big four (Machado, Trumbo, Jones, Davis) as they collectively have a sub .200 batting average against him. For Baltimore, Kevin Guasman had a semi-strong first outing going 5.1 innings and giving up two earned runs versus a potent Toronto offense. Gausman historically has been atrocious vs. right-handed hitters, so it's important for the Yankees right-handed bats to wake up. Most notably the power guys, Holliday, Judge, and Sanchez because Gausman is also very susceptible to giving up long balls. 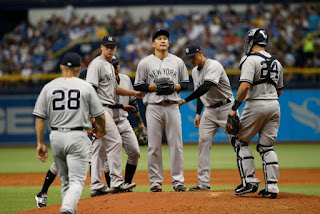 Old faithful, Carston Charles Sabathia gave us a gutsy performance in his first start of the year. He gave up just three hits over five innings in Tampa, handing the Yankees their first and only win of the year. He’s no longer the strikeout machine we’ve come to know and love, but he has reinvented himself into smart pitcher who can be counted on to eat innings in the middle of the rotation. With health being his Achilles Heel over the past few years, he seemed to be in good shape as he pounced on a swinging bunt early in the game. The lefty will have a matchup advantage as Baltimore sports an almost all righty lineup. For Baltimore, Miley is coming off a miserable year in which he pitched to an ERA over six. Believe it or not, he actually finished the year strong with a handful of solid starts. This includes his last start against the Yankees in which he gave up three runs over six innings. 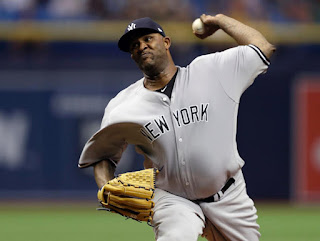 Keys to the series/What to look for:

Battle of the bullpens – Baltimore, like New York has a strong bullpen and have yet to surrender a run in 2017. Getting ahead early in games will be crucial for both sides. Handing the game over to either of these pens with the lead should be both teams goal.

Home run Derby – Both teams are rolling out pitchers who are susceptible to serving up home runs and both teams are capable of hitting them. This series may come down to which team can keep the other in the ballpark.

Well Managed – Buck Showalter hates the Yankees and everyone knows it, including Joe Girardi. Expect these guys to do everything in their power to influence this game for their side. Whoever pushes the right buttons could be the difference maker here.

Chase Headley –Chase Headley is leading the team in almost every offensive category after the first series of the year. No we are not in the twilight zone, I repeat this is real life. .636 batting average, two RBI’s, 11 total bases, three runs, and one home run. Not too shabby from the oft ridiculed third baseman. Not to mention he has made some really stellar plays in the field. 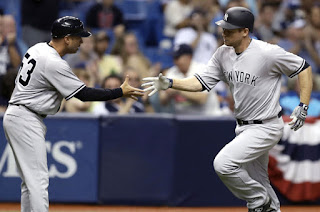 Jacoby Ellsbury – Another guy we’ve come to hate, at least at times, Jake is batting .455 with one RBI, two runs, and one home run. Girardi made the move sliding Ellsbury down to the five hole in the lineup. So far so good, Joe.

The Bullpen – We haven’t seen any saves yet from the Cuban Missile, but the bullpen collectively has gone 13.2 innings without giving up a run. The bullpen was always considered the backbone of this team, but this start is unprecedented.

The Starting Pitching – C.C. had a good start in game two but Tanaka and Pineda were putrid.  Those types of performances from our veterans just cannot happen. With so much youth and inexperience at the backend of the rotation, the Yanks cannot afford to get those clunkers from the front-end guys. Not to mention, it’s not the best strategy to burn out your elite bullpen before the games even start to matter.

Young Hitters – Sanchez, Judge, and Bird are hitting a combined .107 average, with zero homeruns, and one RBI. That’s bad. It’s way too early to even remotely panic and they’re obviously young, but if this continues it’s going to be a long year.

Matt Holiday – The big offseason acquisition hasn’t shown us much as of yet. After the first series he’s batting a measly .182 with one RBI and no homeruns. Holliday missed most of last year due to injury. So lets hope he just needs to knock some of the rust off.