The resurgence of CC Sabathia

By Unknown - April 17, 2017
Who would have thought that in 2017 CC Sabathia would reclaim his former title as Yankees ace? That's right, nobody. Granted, it is still only mid-April so things will change as the season progresses, but there is no denying that Sabathia has been the Yankees best starter thus far. With Masahiro Tanaka struggling, Michael Pineda trying to move past the inconsistencies that have plagued his career (though he's had two straight great starts), and Luis Severino and Jordan Montgomery establishing themselves as major leaguers, old reliable CC Sabathia has provided the Yankees starting staff with a much needed steady presence. In his three outings this season, Sabathia has gotten better each time. It appears that Sabathia has finally succeeded in his attempt to transform himself as a pitcher with diminishing velocity. If Sabathia can keep this up, Yankees fans might just be begging for him to return next season, albeit at a much lower salary than he's accustomed to earning. 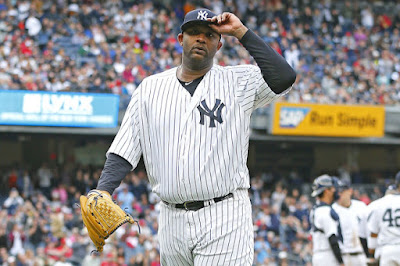 Sabathia has faced his share of adversity these past few seasons. From coming to grips with the fact that he is no longer the frontline pitcher he once was, to struggling to reinvent himself as a veteran with diminished velocity, to his battle with alcoholism, Sabathia has emerged a new man. Whether he discovered the fountain of youth, or, in the more likely scenario, worked his behind off until he successfully made the required adjustments, the Yankees are surely grateful the veteran lefty is back and ready to compete.

The decline of CC Sabathia began in 2013. After dominating with the Bombers from 2009-2012, Sabathia had his first subpar year in pinstripes. The big guy went 14-13 with a 4.78 ERA, giving up a career high 28 home runs. This stat line isn't horrendous, but it represented a huge step back for Sabathia, a former Cy Young award winner and leader of a World Series champion starting staff. In an injury shortened 2014 season, Sabathia went 3-4 with a 5.28 ERA in eight starts. The next season, 2015, would be very troublesome for the veteran left hander. Sabathia went 6-10 with a 4.78 ERA, while tying his career high for home runs given up. Though Sabathia showed encouraging signs towards the end of the season, he was forced to deal with his own personal demons. Prior to the Yankees appearance in the AL Wild Card Game, Sabathia announced that he would be entering rehabilitation to combat his alcoholism. At this juncture in time, many wondered if we'd ever see Sabathia pitch again.

The 2016 season was an encouraging step forward for Sabathia. Having worked closely with good friend and fellow southpaw Andy Pettitte, Sabathia was confident he could reinvent himself at age 35. Statistically, Sabathia ended up having his best season since 2012, going 9-12 with a 3.91 ERA. In 179.2 innings, Sabathia gave up 172 hits, struck out 152, and surrendered 22 home runs over 30 starts.

Fast forward to 2017, and Sabathia resembles the pitcher he was from 2009-2012. In three starts, Sabathia is 2-0 with a 1.47 ERA. Following Tanaka's disastrous opening day start, Sabathia led the Yankees to victory in the second game of the season, shutting out the Rays over five innings. His next start came on April 9 against the Baltimore Orioles. With the Yankees having lost four of their first five games and on the verge of getting swept at Camden Yards, Sabathia put the Yankees in a position to win, something the club's other starters had struggled to do up until this point. In six innings, Sabathia limited the Orioles to three runs, only two of which were earned, in the Yankees 7-3 victory.

This Saturday's performance against the St Louis Cardinals, however, was Sabathia's best in a long time. Over 7.1 innings of work, the big guy gave up only one run, three hits, and one walk, while striking out six. Sabathia left the game to a standing ovation from the grateful Yankee Stadium crowd. It's far too early to definitively say that Sabathia is "back," but he's doing a helluva job at making that argument via his on the field performance. I never thought I'd say this again, but I actually feel comfortable with Sabathia taking the ball every fifth day. For a guy who just a year ago appeared to be washed up and on his way out, Sabathia looks as if he could continue pitching for another three to four years. Again, this may be a premature assessment, but it is absolutely worth considering.

During his prime, Sabathia was a power lefty. His ability to dominate lineups could be attributed to a combination of his high 90s velocity and movement on his pitches. Throughout his career, Sabathia was an absolute horse, consistently pitching over 200 innings in the regular season. As CC aged and added more innings onto his arm, it appeared that he was simply out of gas. With his velocity now averaging in the low 90s, Sabathia was tasked with making adjustments that would allow him to continue being a serviceable starting pitcher. He did this by focusing more on location, as opposed to simply overpowering opposing lineups.

Coming into 2017, the Yankees would have gladly taken a repetition of Sabathia's 2016 performance. It appears, however, that CC has much more left in the tank. Instead of being the number four or five starter that the Bombers expected him to be, Sabathia is pitching like a number two, or even number one, yet again. If these first three starts turn out to be an aberration, and Sabathia reverts back to the average pitcher he had become over the past three years, then this article will have been a waste of time. If he continues to succeed, and potentially lead the Bombers' questionable starting rotation, he'll have come full circle. Sabathia's story is amazing. As a Yankees fan, I'm excited to see what he will do for the rest of the season. The 2017 season is supposed to focus on the rise of the "Baby Bombers," but veterans like Sabathia are challenging that early narrative.