This day in Yankees history: "One of the greatest comebacks in baseball history"

By Unknown - April 21, 2017
It was April 21, 2012. Derek Jeter was hitting .384, Eduardo Nunez was still everyone’s favorite Yankee, and the Yankees bullpen consisted of the deadly duo of Clay Rapada and Cody Eppley. Sarcasm aside, it was a warm Saturday afternoon at Fenway Park and the Yankees were suiting up to play against their infamous rivals the Boston Red Sox, who were in the process of celebrating 100 years of their historic ballpark, Fenway Park. The Yankees slated veteran Freddy Garcia, who was resigned the prior offseason after a surprisingly decent first season in pinstripes, to pitch against the Red Sox. The Red Sox countered with southpaw Felix Doubront, who was in his first full season in the Red Sox starting rotation. The Yankees were off to a similar start as they are in 2017, coming into the game with an above .500 record. They were also a team stacked with veteran talent. The Red Sox were in the cellar of the division and were looking to gain some momentum early on in the season against their rivals. 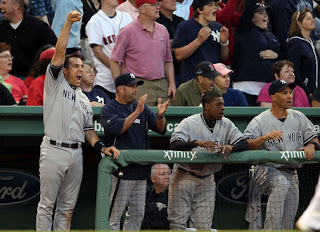 
The Red Sox jumped out to an immediate 2-0 lead, accumulating three doubles in the first inning. After Doubront cruised through the Yankees lineup in the top half of the second inning, the Red Sox knocked out Freddy Garcia with four more hits making the score 5-0. None other than Clay Rapada came in to try to stop the bleeding. Rapada proceeded to serve up a deep fly ball to Adrian Gonzalez causing Yankee fans to hold their breath and slowly exhale. The Red Sox pitching was a weakness and chipping at their lead was more than plausible. Eleven pitches later, Rapada was back out on the mound serving up a hard hit to right field off the bat of David Ortiz. He was replaced by current Marlin, David Phelps, who was the designated mop up man for this game. He ended up giving the Yankees four innings of relief, allowing Ortiz to score and three of his own baserunners. Little did Yankees fans know was that Phelps was keeping them in the game. 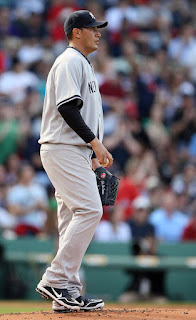 Felix Doubront was cruising through the Yankees lineup with his only blemish being a solo home run hit by Mark Teixeira. His final line was 6 IP, 4 H, 1 R, 1 ER, and 7 Ks, while throwing 99 pitches. He was replaced by Vicente Padilla who, best case scenario, would finish out the game, therefore saving the Sox bullpen some work. The 2012 season was Padilla's in the major leagues and this outing was surely rock bottom for him. He came into the game with an eight-run lead, and after striking out Andruw Jones, the game looked like it was over, if an eight-run deficit was not already evident of that. For every disappointment and head scratching moment in Yankees history, there is an equal number of jaw-dropping plays and one unknowingly to Yankees fans was on the horizon.

Following the strikeout, Padilla allowed a blooper single to Russell Martin, infield hit to Nunez, and walk to Derek Jeter, which loaded the bases for Nick Swisher. Swisher’s smile, charisma, and niche of getting clutch hits made him a fan favorite to many Yankees fans. All of this came into play when he launched a grand slam making the deficit a more respectable four runs. After allowing a double to Robinson Cano in the following at-bat, Padilla was lifted for Matt Albers. Albers actually ended up having a career year between Boston and Arizona in 2012, but that did not stop him from allowing a three-run homerun to Mark Teixeira to stun the Fenway faithful and bring the Yankees to within one run. Rafael Soriano would pitch the bottom half of the inning for the Yankees and allow a ground-rule double, but otherwise pitched a clean inning giving the Yankees an opportunity to shock Boston’s fans. 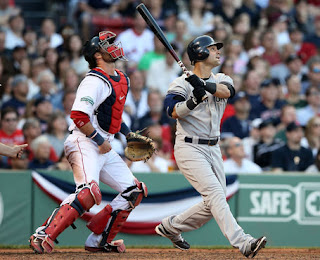 Photo Credit: Elsa/Getty Images
Red Sox manager Bobby Valentine sent southpaw Franklin Morales to the mound to try to prevent any further damage, but Valentine, not surprisingly must not pay too much attention to matchups as he served up a base-hit to Nunez and was immediately lifted for Alfredo Aceves. Aceves was a Yankee farmhand that went 10-2 the previous season. However, his failure to record an out against his former team was a solid representation of his soon to be 2-10 season. He would walk Jeter and then serve up a two-run double to Nick Swisher. The Yankees had done it. Down 9-1, the Bronx Bombers crushed the Red Sox bullpen for 9 runs in two innings. As Nick Swisher pounded his chest on second base, Yankee radio play-by-play announcer John Sterling called this game, “one of the greatest comebacks in baseball history.” If blowing a nine-run lead was not bad enough, the Yankees added insult to injury. They would go on to score five more runs, resulting in a final score of 15-9.

Five years later the comeback still stands as one of the greatest in Yankees history and a humiliating moment to Red Sox fans alike. It was the day following Clay Bucholz allowing five home runs on Fenway’s 100th year anniversary and it featured Bobby Valentine tipping his cap to Red Sox fans who booed him after making his third pitching change of the eighth inning. It was one dismal moment of a 93-loss season for Boston and a historic rally by the Bombers who would go on to lose to the Detroit Tigers in the 2012 ALCS.

What is the moral of the story? I would say there’s a few. As I have written in past articles, baseball is arguably one of the most unpredictable sports in existence. Unless it is Super Bowl LI, sports like football and basketball have certain parameters that prevent comebacks like this one. An NBA team down twenty or thirty points in the last quarter has a near impossible chance to comeback due to the clock. Anything is possible in the last three innings of a baseball game though until the final nine outs are recorded. The last two morals are that there is nothing better than the Yankees crushing the hopes and dreams of Boston and that Bobby Valentine should manage every Red Sox game as long as he lives.