Yanks hit the road, stumble in 6-3 loss to Pittsburgh

By Unknown - April 21, 2017
You can argue that the New York Yankees have been one of the bigger surprises this season, coming off a home stand in which they swept the Tampa Bay Rays, St. Louis Cardinals, and took two of three from the Chicago White Sox. The entire team seemed comfortable coming into The Burgh, and rightfully so. C.C. Sabathia was on the mound tonight for the Yankees, and he has been the club’s best pitcher, entering the game at 2-0 with a 1.47 ERA in just three starts. 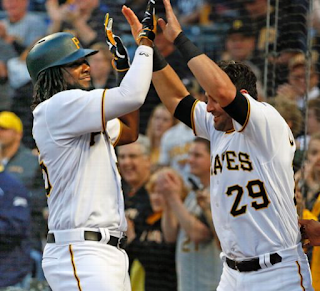 Aaron Judge said, “If one guy doesn’t get it done, we’ve got 24 guys behind them.” This has been the case for the Yankees so far this season, each night a different player steps up. There are a few players that are starting off hot such as Chase Headley and his .396 AVG, Starlin Castro and his glimmering .368 AVG, and of course Judge with his five home runs and 12 RBI. But each night the team has a new hero, and it is captivating to watch the genuine excitement that has been in the dugout for each player getting a clutch hit, or even making a defensive play. This team is buzzing.
However, off the banks of the Allegheny River, in Pittsburgh, PA the Yankees struggled on both sides of the ball. Although mustering 10 hits, the Yankees were only able to bring in three runs. For the Pirates, young six foot eight Tyler Glasnow took the mound with his 0-1 record and whopping 12.15 ERA. Glasnow lasted just four and two thirds innings, throwing 102 pitches and giving up two earned runs. It looked as if Glasnow was going to make it through five at PNC Park, but he ran into trouble with singles by Jacoby Ellsbury and Judge. After a quick coaching visit to the mound, and error by second baseman Josh Harrison in the shift against Greg Bird, allowed Ellsbury and Judge to scorem Glasnow was removed from the game. The shift is now used throughout all of baseball, but it seemed as if Harrison was uncomfortable not being in his natural position. Through five innings all three of the Yankees runs had come by error. 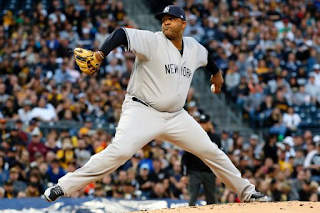 AP Photo/Gene J. Puskar
After having a day off the Yankees seemed just a little off all game. Sabathia was only able to go five innings, being that the game was played in a National League ballpark, giving up four runs and seven hits over that time. Adam Warren came in and pitched two innings striking out three, giving up an unearned run to Jordy Mercer due to a fielding error on a routine flyout to Starlin Castro. In a seventh inning that should have been over, the Yankees ending up allowing another run to the Pirates. David Freese hit a line drive single to center field which brought in Andrew McCutchen. The score after seven was 6-3 Pirates.
The Yankees had one final chance to close the gap and at least tie the game or take the lead, but it was not meant to be.  In the top of the eighth inning, Austin Romine was reached on a fielding error by Freese, and Aaron Hicks singled on a ground ball that got passed second baseman Harrison, but Matt Holliday struck out on a pitch out of the zone to end the inning. 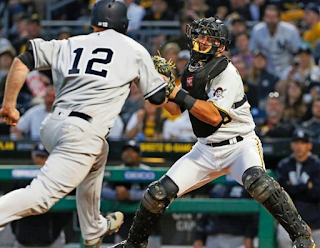 
Finally, in the top of the ninth inning, Castro and Ellsbury were able to reach on singles, but Judge grounded out on a soft roller to second base. Judge left a total of five men on base.

On a briskly played game, the Yankees fell to the Pirates by a final score of 6-3. While it was not a bad game by any stretch, on this six game road trip we will find out a lot about the Yankees. A gigantic error by Castro, and failure to capitalize cost the Yankees tonight.  Are they for real this season, or just off to a hot start? How will the kids respond in Fenway Park? Regardless of those matters, the Yankees can ill afford to let the losses pile up on the road, especially in the A.L. East. After tonight’s loss, the Yankees record on the road falls to a disappointing, 2-5.
Tomorrow afternoon at 2:05 PM EST, the Yankees will try and even the series up. Michael Pineda will take the rubber for the Yankees (2-1, 3.44 ERA) against another giant from Pittsburgh, 6’5 Jameson Taillon (1-0, 0.90 ERA). Taillon has been impressive so far shutting out the likes of the Boston Red Sox and the Chicago Cubs. New York will be hoping to see more consistency from Pineda, coming off a solid start against St. Louis.
Winning pitcher: Tyler Glasnow (1-1, 7.94 ERA) 4.2 IP, 7 H, 3 R, 1 ER, 2 BB, 5, SO