American League All-Star voting update #1: How did the Yankees fare?

Yesterday Major League Baseball released the first update of All-Star voting for the National League. While there were many players that deserved their spots as starters, such as Bryce Harper, Cubs fans got their voting habits going early as Anthony Rizzo and Jason Heyward who have had very poor starts are projected to start the game for the National League. All of the Cubs starting position players are in the top five ranking for their respective position. American League All-Star voting used to be dominated by Red Sox and Yankees players as players from their respective teams would constantly be battling back and forth to see who would start the game. With new American League teams coming into prominence at the turn of the decade, it is very common to see fans bandwagon these new relevant teams and thrust their players into the Midsummer Classic. Yes, this is why the American League almost got renamed to the Kansas City Royals. The real question is how did the beloved Bronx Bombers fare? 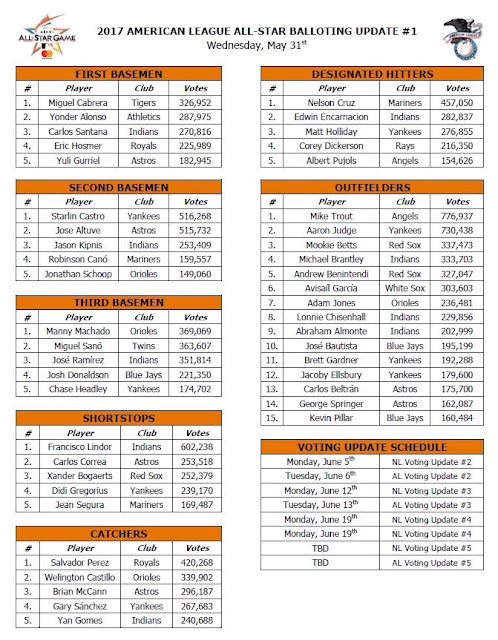 The Yankees did extremely well in the early going as Starlin Castro and Aaron Judge are currently projected to start the game, while Gary Sanchez, Matt Holliday, Didi Gregorius, Brett Gardner, Jacoby Ellsbury, and even Chase Headley made appearances on the ballot update. The uptick in Yankee voter turnout is likely correlated to the fact that the team is young, exciting, and playing better than they have in a very long time.

Aaron Judge is currently the second highest vote getter among all players in the American League, which shows his new fan base is rising, pun intended, to the occasion to put the fearsome slugger into his first Midsummer Classic. He currently holds a lead of almost 400,000 votes over Red Sox star, Mookie Betts. As long as he keeps up his monstrous pace, there is no doubt he will be starting in right field in Miami.
Starlin Castro is in a much tighter race than Judge. Castro currently is only a mere 536 votes ahead of Jose Altuve for the starting spot. If this does not show that every vote matters, than nothing will. Castro has cooled down as of late, but nonetheless, has been terrific this season and is deserving of his first All-Star appearance as a Bronx Bomber.
First base has been a weak position in much of baseball this season, depicted by the fact that the position has the least number of votes of any position in this update. It is also the only position the Yankees did not have player representative in the first update. Sorry Chris Carter and Greg Bird.

Overall, the American League did an adequate job voting for the starters. There are a couple questionable players that are on the ballot update, but not starting, including the Yankees very own Chase Headley. However, there are no "Omar Infantes" currently slated to start, which is a win for everyone.

Brett Gardner should be higher on this list as he is hitting home runs at a crazy rate and is continuing to play the defense that won him a Gold Glove Award. It is also disappointing that Aaron Hicks is not on this list, after his breakout start to the 2017 campaign. Hicks is not one of the Yankees starting outfielders, therefore, he is not even on the ballot. The only way he could appear on the next update is if fans write his name in a ton.

In conclusion, listen up Yankees fans. Everyone needs to let their voice be heard and vote for their favorite players that deserve to be in Miami, when the Midsummer Classic comes around! Below is the link to vote for the players. Go Yankees!