By Unknown - May 15, 2017
1.  Gleyber Torres SS  – Torres returned from injury since our last update and didn’t miss a step. In the past two weeks he has raised his average about 10 points and mashed four doubles. He’s also added a home run and six RBIs since we last saw him. Torres continues to show that he is the real deal. 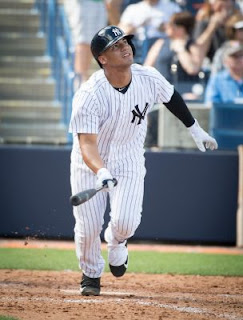 2. Clint Frazier OF – After many began to write off Frazier, he showed why he is number two on this list. Frazier has been on a hot streak that has silenced all the haters, at least for the moment. After an abysmal start, he’s raised his average up to .250 and gone deep three times since our last update, raising his home run total to five. He’s also added five doubles and a gaudy eleven RBIs. Frazier also flashed his plus arm as he threw a laser to get a runner trying to go from first to third.

3. Blake Rutherford OF – Rutherford has bounced back after his first cold streak of the season. After starting white hot, his averaged drop nearly 75 points as he faced an absolutely miserable slump. Since then Rutherford has bounced back in a big way, bringing that average back up to just under .300. He went yard for the first time all year and also added four more doubles. His hitting continues to be timely as he knocked in seven RBIs since our last update. I would presume his power will continue to develop as he gets stronger, but his overall mature approach and ability to get it done with RISP has to have the Yankees brass excited.

4. Jorge Mateo SS – Mateo continues to be the most perplexing prospect on this list. I was able to catch a bunch of his game tape over the past month or so and it really is fascinating stuff. He continues to strike out and give away at bats, which is why he is batting a disappointing .244. In those at bats, his footwork looks awful and if you didn’t know who he was, you wouldn’t believe that he was a top prospect. Then in the very next highlight he has a game where he goes 4-6 with two home runs, a double, and five RBIs. Mateo’s speed is elite and his power is underrated. If he put it all together he has the tools of a Carlos Correra. This is a huge IF. At this point I’m not sure if it's concentration or maturity holding him back. He certainly has the tools, but it’s up to him to put it together. Of all the prospects on this list, he may be the one you want to pay closest attention to.

6. Justus Sheffield P – Sheffield got off to a hot start to 2017 giving up just three earned runs over his first 17.2 innings pitched. Since then he’s put up a couple of poor performances, including a start where he lasted just 2.1 innings. On the bright side, he continues to average about one strikeout per nine innings and he has improved his strike to ball ratio. On the other hand, Sheffield is serving up over one home run per nine innings and one hit per inning. His approach to attacking hitters will take time and like many young pitchers he’ll need to learn that sometimes it’s okay to give in versus giving up a hit. 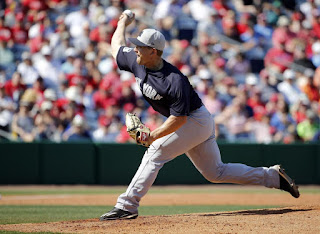 7. Chance Adams P  – If I wanted to I could have copied and pasted Adams' write up for every one of these pieces that I’ve done. Another week, another dominate Adams performance. If we were basing these rankings on weekly and yearly performance, Adams would be number one on this list and it probably wouldn’t be close. He was promoted to AAA this week and preceded to throw a five inning shutout in which he struck out six batters. Nothing seems to phase this guy. At this point if the Yankees are contenders in July and Adams continues his dominance, how could he not be called up to pitch in the bigs? People say the Yankees don’t want to give up a year of control on him. But what’s more valuable, that year of control or the prospects you’d have to trade for another pitcher? I guess we will have to wait and see.

8. Dustin Fowler OF – Fowler has been downright impressive over the past month or so. If it weren’t for an absolutely horrible start his numbers would be even more off the charts. He has a whopping six triples, to go along with five homers and seven doubles. The only issue with Fowler is he only has nine walks to 29 strikeouts. I’d like to see him be more selective and raise is OBP a bit. Other than that, Fowler has been a force. This includes his versatile above average defense in the outfield.

9. Miguel Andujar 3B – Andujar has had just about the opposite season of Fowler. After a red-hot beginning to the year, he has been mired in seemingly a season long slump. He hasn’t hit a home run in nearly a month and his strikeout rate has began to climb a bit. Like Fowler, he has only seen six walks this year which isn’t enough, especially when your batted balls aren’t finding holes. Andujar has shown he has the tools to be a good player, he will have to battle through some adversity to turn his season around.

10. Albert Abreu P – Abreu has had two starts since being promoted to the High A Tampa Yankees. The first was very good (7IP, 1 ER, 4 K’s) but the second wasn’t so great (3 IP, 4 ER, 2 K’s). His control seemed a bit off in his second start and may have just been a case of “not having it.” You’d expect a young pitcher to struggle when he gets moved up, so this isn’t anything to be alarmed about. Abreu will regroup and get back out there this week. He is a long way away from
making an impact in the major leagues and will be brought along slowly.

Yefry Ramirez P- TRN- Rule 5 draft pick Yefry Ramirez threw another five innings of shut out baseball this week for the Trenton Thunder. He is on the 40-man roster so it wouldn’t be a shock to see him get an opportunity in the Majors this year if the Yankees suffer an injury or run into another one of those 18-inning games.

Hoy Jun Park SS - CHL– Park has been mentioned on this list before and will stay if he keeps performing the way he is right now. Park continues to hit, batting .321 for the Charleston Riverdogs. An above average defender, Park has become a force at the plate. His impressive .409 OBP is fourth in the South Atlantic League. 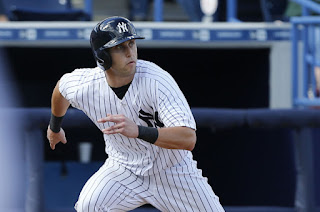 Stud of the week
Chance Adams
Adams and Fowler have taken over this spot for the past month. This week Adam gets the nod. A promotion to AAA didn’t stop Adams from continuing his dominance. I keep waiting for a misstep from him, but he just keeps on rolling.

Dud of the week
Miguel Andujar
His slump continues as we enter the second month of the season. His great opening to the season shows Andujar’s promise, but his ability to pull himself out of this cold streak will be telling of what kind of player he really is.