Chris Carter is blowing his opportunity

By Unknown - May 15, 2017
When Greg Bird was put on the 10-day DL on May 2nd, it opened up an opportunity for Chris Carter to play every day. Since Bird went out, Chris Carter has vastly underperformed, and shown he doesn't deserve a spot in a righty-lefty platoon at first base when Bird comes back. 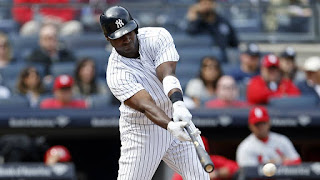 In the month of May, Chris Carter is hitting .182, with 11 strikeouts in 22 at-bats. In total on the season, he is batting .174 with 10 strikeouts in 23 at-bats with RISP. He only has one home run on the season. As a player who is supposed to be an all-or-nothing type of player, the Yankees are getting a lot more of “nothing” than “all.” When Carter’s strikeout to home run ratio is 25-1, he’s simply a liability and nothing else.

But what is Joe Girardi supposed to do? Bird still isn’t on the major league roster and it’s no guarantee he’s going to hit when he comes back. Unfortunately, Carter still has to play in the meantime. However, we have seen Girardi tinker with the lineup just enough to see what could happen in the future.

If Bird comes back and hits competently, he should be starting basically every day. Once he gets into a groove, you can spell Bird at first base with Matt Holliday. That would also enable Hicks, Ellsbury or Gardner to take the DH spot. All four outfielders are hitting better than anticipated, so getting all of them into the lineup at once would lead to some potency.

If Holliday can take Carter’s reps at first base, the Yankees can designate Carter for assignment and bring up another versatile player like Tyler Wade, who is hitting .321 in Scranton. Another option would be Tyler Austin, whose time on the DL will be coming to an end in the near future.