Envisioning a trade for Gerrit Cole

By Unknown - May 12, 2017
As I contemplated writing this piece, I knew I would be criticized by those who believe discussing such a topic at this point in time constitutes nothing more than premature conjecture. While it is still only early May, the Yankees' impressive 21-11 start shows that they have what it takes to be a real contender this season. Meanwhile, there are areas where the Bombers can improve. In order to go on a deep playoff run, the Yankees NEED another starting pitcher. CC Sabathia's recent implosions signify that the Yankees may very well have to replace him in the rotation at some point this season. The Yankees have plenty of time to get the wheels rolling on making such an improvement. One name that makes the most sense for this season, and moving forward, is Gerrit Cole. The Pittsburgh Pirates will no doubt have astronomically high demands for their ace. The Yankees have what it takes to make this trade happen. The pressing question, however, is if the Bombers are willing to part with some of their stud prospects. For Cole, I would argue the answer is a resounding YES. 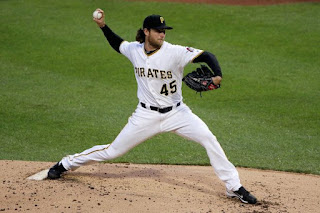 Following the Yankees' 1-4 start to the season, I referred to the starting rotation as an, "unmitigated disaster." Given the benefit of hindsight, my previous analysis appears to have been not only hyperbolic, but also patently false. Michael Pineda, Luis Severino, and Jordan Montgomery have performed exceptionally well. Though Masahiro Tanaka hasn't pitched like the ace he's being paid to be, he has shown flashes of his usual self, such as his complete game shutout at Fenway Park. CC Sabathia is left as the weak link. Through his first three starts, the veteran lefty and mainstay in the Bombers' rotation turned the clock back to 2009, going 2-0 with a 1.47 ERA. His last four starts, on the other hand, have been atrocious, as Sabathia has posted a 9.58 ERA over that span.

Let me be clear. I am not calling for the immediate removal of Sabathia from the starting rotation. The 36-year-old veteran should be given every opportunity to work out of his funk, and not only because of his $25 million salary. He proved last season, and at the start of this season, that he can still be a serviceable Major League starter. If, however, we are still having this conversation in one month from now, it will be time for the Yankees to take decisive action. Internally, the Yankees could elevate Chad Green, Luis Cessa, Bryan Mitchell, or, dare I say, Chance Adams, to the starting rotation. Such a move would be permissible if the Yankees were not contenders. Since the Yankees appear to be amongst the better teams in baseball, they must look to actually improve the starting rotation, not simply throw something at the wall and hope it sticks.

Though the Yankees could look to acquire a mid-level starter, I believe such an effort wouldn't necessarily be conducive to the club's best interests. Promoting one of the young guys identified in the paragraph above would have a similar impact on the club. The reason Brian Cashman did not pursue Chris Sale this offseason is because he did not believe the Yankees were one player away from winning a championship. If the Bombers continue to play this well into June and July, they could actually become a team that is one player away from being championship contenders. 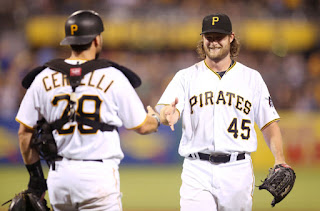 This brings me to the purpose of this rather long article. Gerrit Cole makes the Yankees serious championship contenders. Cole will forever be the one who got away. After being selected by the Yankees with the 28th overall pick in the 2008 draft, Cole spurned the Bombers in favor of attending UCLA. In 2011, Cole's gamble paid off after he was drafted first overall by the Pirates. The injury bug has bitten Cole quite a few times over the course of his major league career, but he is a special talent. Most importantly, he is a difference maker.

Though they took two of three from the Yankees this past April, the Pirates do not appear to be a very good team. If they continue to struggle, trading Cole becomes a realistic possibility. Granted, Pittsburgh will have to be blown away to move Cole, but the good news is that the Yankees are one of the few clubs who actually have what it takes to make this trade happen.

Moving forward I'm going to assume that Aaron Judge and Gary Sanchez are untouchable, as they should be to their importance to Yankees' lineup. Therefore, the Pirates would immediately ask for either Gleyber Torres or Clint Frazier as the basis for this trade. Though it would not be desirable to part with either of these two studs, dealing the latter wouldn't be the end of the world. The Yankees have a plethora of outfield depth. The emergence of Aaron Hicks this season has provided the Yankees with a dilemma due to the already set outfield of Jacoby Ellsbury, Brett Gardner, and Judge. The Yankees are stuck with Ellsbury's albatross of a contract until 2020. Sure, Gardner could be traded due to his team friendly contract. Even if the Yankees chose to do this, Hicks would likely be the immediate replacement. In the minors, the Yankees also have Dustin Fowler and a little further down the line, Blake Rutherford. Frazier is valuable, but not essential. 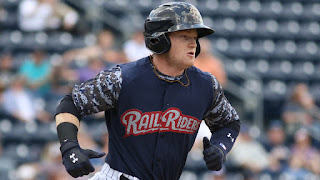 In addition to the top line prospect, Pittsburgh will then likely ask for a prospect of the caliber of Justus Sheffield, also acquired in the Andrew Miller trade last July. Again, I do not want to part ways with Sheffield either, but if it means landing Cole, the move is worth making. In addition to Frazier and Sheffield (again I'm being purely speculative), the Pirates would probably want a lower level prospect, or two. Cole is a sure thing. We do not know if Sheffield will be. Cole is under contract, at an affordable rate, for the next two seasons. I also wouldn't rule out the Yankees signing him beyond then. Acquiring a 26-year old ace-level pitcher is not an opportunity that will arise often. Heck, we don't even know if he truly will be available. If he is, dealing from the deep farm system, without completely decimating it, actually makes sense.

The 2017 Yankees were supposed to be a team in transition with the potential to fight for a wild card spot. After the first month or so of the season, this Yankees team has proven itself to be so much more. They are a year or two ahead of schedule. The offense, bullpen, and starting rotation are all clicking. Most members of the rotation have performed well thus far, but it remains the weak point of the roster. Replacing the struggling Sabathia with Cole makes this team true World Series contenders. Trading away prospects is not ideal, especially with the Yankees newfound status as a prospect powerhouse. That being said, this is New York. Winning is still the preeminent goal. If the Yankees continue to be amongst the best teams in the league around the trade deadline, Cashman should not hesitate to make a deal for a player that can make the difference. Ladies and gentlemen, that player is Gerrit Cole.