By Andrew Natalizio - May 29, 2017
Yes, we are still over two months from Major League Baseball's trade deadline, but it's never too early to start looking at potential upgrades to the 2017 New York Yankees.  Through 47 games,  the Yankees sit at 29-18 and the team's hot start is no longer just a streak of good games, this team is for real.  As such, like most contenders do, the Yankees will be on the lookout for roster improvements via both internal options as well as the trade market.  Today, I want to take a deep dive into potential trade targets that Yankees General Manager Brian Cashman might go after.


First and foremost I want to lay down two ground rules here.  Number one, the Yankees have a deep base in the minors and it's conceivable that no trades will be made at all and the team will give their young studs every opportunity to succeed.  Along that line of thinking, I'm not going to touch on the high profile trade targets (Josh Donaldson & Jose Quintana, among others) that will require giving up top prospects.  I will also be avoiding players with long term salary commitments, as the Yankees aim to shed payroll this season and next, so as to align themselves for the prime 2018-19 free agent class.  Cashman has made it very clear this is not the direction this team is going in, so I won't waste your time on such nonsense.

Secondly, I'm going to focus primarily on positions of need, namely, first and third base, and the middle relief.  At third, Chase Headley has come crashing back down to Earth after his hot start to the season, Ronald Torreyes is not an everyday player, and Gleyber Torres may still need some more seasoning in triple-A before he's fully ready.  At first, Chris Carter has been nothing short of an unmitigated disaster, Greg Bird is still on the disabled list (although he is expected to start his rehab assignment soon), and Tyler Austin has yet to play in a game this season recovering from a broken foot suffered early in spring training.  As for the middle relief, the Aroldis Chapman injury has pushed everyone up in the Yankees bullpen and pitchers like Tyler Clippard, Adam Warren and Jonathan Holder have struggled of late, now pitching in more high-leverage situations.

So where does that leave us? Essentially I'm going to be searching for diamonds in the rough that could be had for a low cost.  Veteran players that won't cost an arm and a leg to acquire, and won't block the path of top Yankees prospects ready to make The Show over the next year or two.

Had I written this article a little over a week ago, the first name that I would have thrown out was former St. Louis Cardinal, now Atlanta Braves' first baseman Matt Adams, who was acquired in the wake of the injury to Freddie Freeman. Adams was acquired for a low level minor leaguer and cash considerations.  Exactly the type of deal I'm looking for with this piece.  Yes, it's true that Adams is no world beater, but he is a player that offers solid defense at the position, and his left-handed power stroke could be a perfect fill in at first base, not to mention an upgrade over what the Yankees are currently getting from Chris Carter.

There's no guarantee that the players I discuss here will actually turn their seasons around once they are (hypothetically) in pinstripes, but I'm reminded of how guys like Clippard and Warren turned around their poor seasons in 2016 once they were (re)acquired by the Yankees.  To be clear: I'm not targeting surefire successes, but rather, low-risk, high-reward players that will cost pennies, and have the potential to play key roles in the 2017 Yankees' season.  Brian Cashman has time and time again proven he can find these type of players, with some examples being Jerry Hairston, Jr. in 2009, Kerry Wood in 2010, and Alfonso Soriano in 2013.


Prior to the 2017 season, Kendrick signed a one-year, ten million dollar contract with the Philadelphia Phillies, and has spent the better portion of the season thus far on the disabled list.  Kendrick, who is expected to be activated today, hit .333 over ten games before a strained oblique put him on the shelf.  He is a perfect fit for the 2017 Yankees as he has no long term contract commitments, he can play any infield position, and he offers a better bat than what the Yankees are getting from either Carter or Headley.  Kendrick can spell Headley on certain days at third, and platoon with Bird at first on others.  The Phillies are currently in dead last in the major leagues and should be expected to be sellers at the trade deadline. For a player that has never had issue hitting in the Bronx and shouldn't cost all that much to acquire, this is a move I would love to see Brian Cashman make. 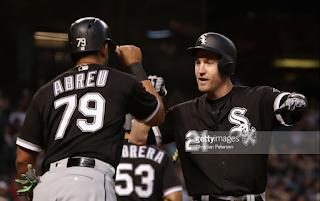 The subject of many trade rumors this offseason, but ultimately never moved, Todd Frazier is another tantalizing trade target that can be had at a bargain price.  Frazier, of course,  is a local product and grew up idolizing Derek Jeter and the Yankees.  He provides a steady dose of power at the hot corner, and like Kendrick, is only under contract through the end of this season. Frazier has struggled to a .186/.305/.364 batting line this year with only six home runs, but this is a guy just a season removed from a 40 homer year.  Frazier's struggles should only further decrease his trade value, and if Cashman can pounce on this early, rather than wait until Frazier is a hot commodity in July, he can be had for a reasonable price and provides immediate improvement over Headley at third or Carter at first. 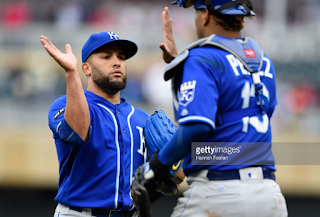 Although I admit this is the biggest pipe dream on the list, it's foreseeable that the last place Kansas City Royals could be headed for a fire sale this summer, with so many pending free-agents this offseason and a core that brought them a title just two years ago no longer performing at that level.  Herrera would be a powerful addition to a Yankees bullpen that already boasts Dellin Betances and Aroldis Chapman, and he comes with an extra year of team control in 2018 through arbitration.  The Royals' closer has struggled a bit this season to a 3.86 ERA with five home runs allowed, but his struggles would seemingly deflate his value on the trade market. Herrera might cost a bit more than the others I'll discuss in this piece, but I'm foaming at the mouth imagining a troika of Herrera-Betances-Chapman closing out games for the Yankees. 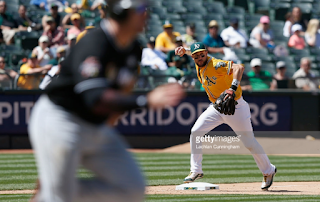 Trevor Plouffe is another former Minnesota Twins first round draft pick who has all the talent in the world, but never been able to put it all together consistently in his major league career.  Perhaps the Yankees could turn him around in the same manner they have with Aaron Hicks?  On a one year deal with the perpetually rebuilding Oakland Athletics, I would expect A's GM Billy Beane to be taking offers for Plouffe come July.  Plouffe has never played on a contender, and I think the bright lights of New York and the pressure of a pennant chase could bring out the best in this 30-year-old veteran.  Plouffe is slashing .243/.305/.395 with Oakland this year with six home runs.

Another player on a last place team that will be looking to sell this summer, Wade LeBlanc has quietly put up very strong numbers out of the bullpen for the Pittsburgh Pirates.  LeBlanc has made 18 appearances out of the bullpen for Pittsburgh this season, throwing 30 innings of 2.70 ERA ball.  LeBlanc would give the Yankees another left-handed weapon out of the bullpen – a clear upgrade over Tommy Layne, I might add – and comes on an incredibly cost friendly 2017 contact with a $1.25 million club option in 2018.  The Yankees and Pirates have made plenty of deals over the last decade, so I wouldn't be surprised to see Cashman call up his old buddy Neal Huntington to see if a player like LeBlanc could be had at a reasonable cost.

What do you think? Do any of these players excite you as prospective Yankees trade targets? Have a name or two I might have missed?  Be sure to connect with us on Twitter or leave a comment below and let your voice be heard.