By Unknown - May 01, 2017
Welcome back to our bi-week prospect update. This week’s biggest news is the removal of Aaron Judge from our list. He is officially no longer considered a prospect and will not be featured here. As sad as I am to see Judge go, that means we have room for a new prospect and also that I get to watch him on cable TV hitting moon balls every other day. Enjoy! 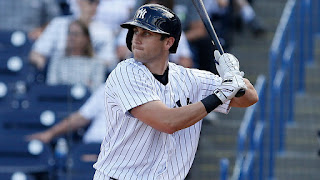 1.  Gleyber Torres SS  – Two weeks ago Torres was randomly scratched from a mid-week start due to a sore shoulder. While taking batting practice prior to the game, Torres injured the shoulder on an awkward swing. After an initial diagnosis of a bicep strain, an MRI showed mild shoulder tendonitis. This was enough for the team to put him on the 10 day DL. Hitting the DL this early in the year is not ideal by any means, but the injury could have been much worse, so consider this a bullet dodged. Torres came off the DL this week and seems to be fully recovered from the injury.

2. Clint Frazier OF – It’s no secret that Frazier has struggled a bit in 2017, but the amount of “is Clint Frazier” still a top prospect media stories need to stop. I’m not trying to tell you he is the next Bryce Harper (more like Nick Swisher, in my opinion) but to call him a bust already is absurd. The kid has raw tools and is getting his first real taste of AAA after a short stint there last year. We are just 20 games into the season, so lets all take a breath. On top of that he has shown some power in the past week with a couple of home runs and doubles. Like I mentioned in the past, developing this power stroke will be crucial to how high his ceiling is.

3. Blake Rutherford OF – Rutherford has struggled a bit after a white-hot start to the year. He has seen his batting average drop nearly 75 points, which is mostly due to the small sample sizes we are dealing with. Ideally, we would like to seem him at .285 or above by seasons end. The good news is we are seeing his power to the gaps develop, clubbing four doubles since our last update. It is worth mentioning that one of those doubles was a late inning game-winner. We also saw Rutherford dive into the stands to steal an out on a “web gem” like effort in right field.

4. Jorge Mateo SS – Over the past week we have seen the glaring holes in Mateo’s game and how they directly affect him statistically. Since our last update Mateo has seen his average plummet nearly 100 points and his stolen base total stall, after averaging almost a steal a game. The only number rising for Mateo is his strikeouts. So it’s very simple, as the contact rate goes down, so do the average and stolen bases. Mateo’s speed is what separates him from the pack, but if he can’t get on base to use it, then he no longer belongs on this list. Something to note is his usage in centerfield. Granted, Didi Gregorius has been in Tampa rehabbing at shortstop, but even before then Mateo was taking a ton of reps in centerfield. I wonder if this has to do with Starlin Castro’s blistering start to the 2017 campaign? Maybe I’m thinking too much into it and way too far ahead, but keep that in mind.

6. Justus Sheffield P – After throwing some solid innings in spring training, Sheffield was assigned to the class Double-A Trenton Thunder. He continued his lights out ways, tossing 5.2 innings of scoreless baseball in his debut. So far, so good for Sheff. His development has been on a steady pace since being acquired last year. His 12 walks are a bit high, but this is to be expected with a young arm. On the other hand, his 21 strikeouts in just 22 innings shows how filthy is stuff is. 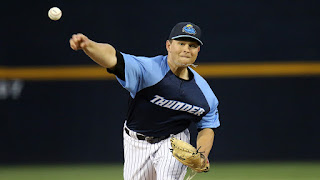 7. Chance Adams P  – Is there anything more to say about Chance Adams at this point? The guy is an absolute stud. Myself, like many, expected him to come back to earth this year after coming out of nowhere last year. That doesn’t seem to be the case, at all. Adams hasn’t just been good, he’s been down right unhittable. Like Sheffield, he needs to work on his control and working outside of the strike zone, but that is expected at his age and experience level. With Kaprielian out of the picture, Adam seems poised to take over as the top arm in the system.

8. Dustin Fowler OF – Fowler has gone from being lost at the plate to absolutely scorching hot. His early power surge has continued with four more doubles, two triples, and two homeruns. Fowler managed to hit for the cycle during this streak. On top of his hot bat, he continues to be an elite defender in the outfield, with the ability to play all three positions.

9. Miguel Andujar 3B – Put Andujar in the category of, “prospects who have faded after a great start.” He has seen his average plummet and power numbers suffer mightily over the past two weeks. Again, this is a small sample size, so it will be interesting to see where Andujar is in a couple of months statistically speaking. One thing worth noting is that his strikeout rate has been pretty solid, even with his statistical slide. That means, while he may not be getting hits, he is putting contact on the ball. This is a great sign for his pitch recognition and overall hitting approach. 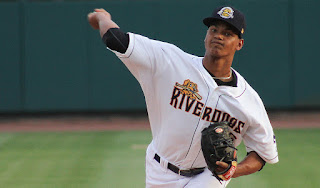 10. Albert Abreu P – And sneaking into the top prospect list is…drum roll please. Let me re-phrase that, Abreu didn’t sneak in, he actually ripped the door off the hinges and strutted onto the list. In less than a month Abreu was promoted from Charleston to High A Tampa. The new league was no issue for Abreu, as he went seven innings in his first start there, giving up just one run. His fastball sat in the mid 90’s and touched 98 at multiple points throughout the game. By far the most incredible stat Abreu has to offer is his 22-3 strikeout to walk ratio.

Zack Littell P- TPA- Littell came over last year from Seattle in exchange for James Pazos. While it didn’t garner the attention some of the others move did, it seems to be working out for the bombers. In three games for the Tampa Yankees, Littell has an ERA of 2.00 and struck out 13 batters in just 18 innings pitched.

Hoy Jun Park SS - CHL– Park has been in the shadow of other top prospect middle infielders Torres and Mateo. An international signing in 2014, Park’s signature has always been his defense. You certainly wouldn’t know that was the case based on the numbers he’s putting up for the Charleston Riverdogs. After 20 games, he’s hitting .321, with 3 homeruns, and 13 RBIs.

Stud of the week
Dustin Fowler
The first draft of this blog had Chance Adams taking home stud of the week. Adams has been down right unhittable up to this point of the season. But Dustin Fowler snuck in hitting for the cycle on Saturday and has brought his batting average up over 100 points and continues to hit for power, while playing top end defense.

Dud of the week
Jorge Mateo
After praising his start to the season, Mateo has fallen on hard times. To reiterate, those strikeouts have to stop or he won’t continue being called a “top prospect.”