By Unknown - May 08, 2017
The Bronx Bombers are back! Coming off an impressive three game sweep of the Chicago Cubs in the Windy City, the first place Yankees continue their interleague swing with a quick stop in Cincinnati for two games against the Reds. Surprisingly, the Reds have gotten off to a better than expected start. These are two games that the Yankees are more than capable of winning. The lineup has proven itself to be an offensive juggernaut. As long as the hitters keep the ball rolling and the pitchers continue pitching well enough to win, the Yankees should sweep this short series. On the other hand, a split might be more realistic due to a combination of the inherent disadvantages of playing in a National League park, fatigue from Sunday night's extra innings marathon, and CC Sabathia's recent struggles. 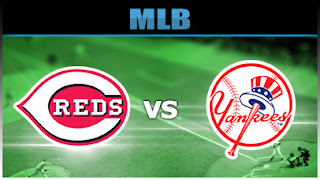 After getting off to a horrific start to the season, and being the subject of the scorn of yours truly, Tanaka has settled down nicely and reestablished himself as the Yankees de facto ace. Having won his last four starts, Tanaka appears to have picked up where he concluded the 2016 season. Tanaka's complete game shutout against the Red Sox at Fenway, in which he gave up only three hits and walked none, reminded Yankees' fans why the team dished out so much money to its Japanese ace in the first place. Though Tanaka wasn't nearly as dominant in his subsequent start against the Blue Jays at the Stadium, he provided the Yankees with a chance to win the game, and they took advantage of it. Giving up four earned runs over six and one third innings doesn't jump off the page, but you can't expect your pitchers to dominate every night. Expect Tanaka to rebound nicely and have a good showing against a not so threatening Reds lineup. The Yankees will need distance out of Tanaka in this one.

A former Yankees farmhand, Davis was part of the package that the Yankees sent to the Reds two offseasons ago to land closer Aroldis Chapman. Davis is coming off of his first major league victory against the Pittsburgh Pirates. Over five shutout innings, Davis surrendered only four hits and walked three. His previous three outings were a bit rough, so the Reds have to be encouraged by what they saw from Davis his last time out. Davis will have his hands full against this overpowering Yankees lineup. The Yankees will try to get the young right hander rattled early on so they can take advantage of some rookie (no pun intended) mistakes. Nonetheless, it's hard to imagine that Davis won't bring his best against the team that dealt him two winters ago. 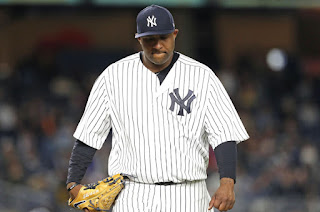 CC Sabathia's remarkable first three starts prompted me to write an admiring piece of the veteran left hander. I'm starting to believe that I may have wasted my efforts with that piece of writing. Sabathia's last three starts have been pitiful. Had it not been for two consecutive offensive outbursts, Sabathia would be spotting a losing record at this point in time. All the Yankees can hope for from Sabathia is that he keeps the team in the game. A replication of the veteran's 2016 performance would more than suffice for the Bombers. Sabathia has shown that he's capable of getting the job done. Though it may have been unrealistic to expect the former-ace to match his first three starts over the course of an entire season, he still proved that he's capable of mowing down opposing lineups. This will be an important start for the big guy. If he can rebound from his recent struggles, the Yankees will be much more comfortable moving forward with CC as a member of the rotation, albeit as a number four or five starter. On the other hand, if Sabathia's struggles continue, question marks will linger, and fans will start calling for his removal from the rotation.

Tim Adleman, a Staten Island native, has gotten off to a decent start in his second year in the majors. Like Davis, Adleman is coming off of a victory against the Pittsburgh Pirates. In six innings of work, Adleman gave up only two earned runs and six hits, while striking out five. Again, the Yankees offense should take advantage of a guy like Adleman, but you never know. This could be one of those let down games. With Sabathia on the mound, the Bombers may have to score a lot of runs to pull out the victory. Lefties are batting a measly .167 against Adleman, while right handers enjoy a significantly higher average of .304. Luckily for the Yanks, the lineup is comprised of plenty of right handed power, including Starlin Castro, Gary Sanchez, and Aaron Judge. Matt Holliday, the regular DH, is also an option to play in the field for this game, perhaps at first base in lieu of everyone's favorite, Chris Carter. 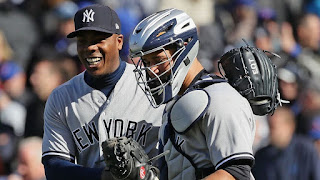 After the news broke of domestic violence allegations against Chapman, the Reds were eager to cut their losses. As a result of this dynamic, the Yankees were able to swoop in and acquire the Cuban fireballer for a package that likely wouldn't have yielded the same return under normal circumstances. Having been dealt to the Cubs by the Bombers at last year's trade deadline, Chapman had a few opportunities to face the team he played for from 2010-2015. This will be, however, his first time back in Cincinnati as a member of the New York Yankees. Due to Chapman's implosion during his blown save against the Cubs on Sunday night, he will likely not be available for Monday's game. On Tuesday, however, maybe he'll get a chance to face his former team.

Castro is on FIRE. The American League hits leader didn't miss a beat in his return to Chicago this past weekend, as he wrecked havoc on his former team. If it weren't for Aaron Judge's record setting start to the season, Castro might very well be the story of the year thus far for the Bombers. It's hard to imagine that Castro is still only 27-years old. Granted, Castro did get off to a hot start last season before cooling down considerably, but he's been otherworldly in 2017. Hopefully playing his former NL Central rivals will further ignite whatever has sparked Castro's impressive start, and allow it to continue.

All rise for the Honorable Aaron Judge. This will be Judge's first series at Great American Ball Park. Judge's power should transfer over nicely to this hitter friendly stadium. Judge has become must see TV. Moreover, he should scare opposing pitchers to death. For this reason alone, Judge will be a player to watch for the foreseeable future. On a more serious and analytically prudent note, Judge's power stroke should fair better in Cincy than it did in Wrigley with the unfriendly wind that defined this past weekend. 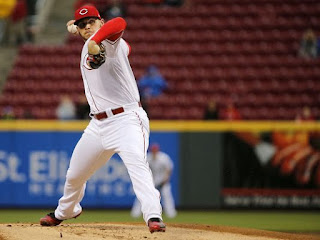 Selected by the Yankees in the fourteenth round of the 2011 draft, Davis worked his way through the Bombers' farm system for four years. As previously mentioned, the Bombers included Davis in the deal that brought Chapman to the Bronx. It's always exciting to watch players who came up through the Yankees farm system. Though Davis never got the opportunity to prove his worth in NY, he is currently a staple in the Reds rotation. Whether they realize it or not, players often play at a higher level against their former teams. Davis knows the Yankees traded him away. Expect this to serve as ample motivation for the young righty to give it all he has against the visiting Yankees.

Suarez has gotten off to a more than notable start this season. In 29 games, the third baseman is batting .333 with seven home runs and 21 RBIs. Yankees pitchers must be careful when Suarez is at the plate. They cannot let him beat them. Considering that he's the hottest hitter in the Reds lineup, the Yankees pitchers may opt to pitch around him, if need be. Needless to say, its always enjoyable to see talented young players that the Yankees don't get to face that often. Of course, it would be nice if he took a temporary break from his hot streak for these two games.

The Reds have undergone some drastic changes over the last few seasons. After trading away franchise cornerstones Aroldis Chapman, Todd Frazier, Brandon Phillips, and Jay Bruce over the last few seasons, the Reds entered a rebuilding faze. Joey Votto remains as one of the last players of the old guard. Votto has gotten off to a respectable start to his season, as he is hitting .279 with nine home runs and 26 RBIs. Similar to Suarez, Votto can turn careless mistakes into costly ones. Yankees pitchers must be careful when pitching to this Reds' veteran. As the current face of the Reds' franchise (or so I would think he is), Votto is likely eager to put on a good performance against the visiting the Yankees.

Based on what we've seen thus far from the Yankees, it would be more than reasonable to conclude that the Bombers are the better team in this series. It is imperative that the Yankees do not follow up their sweep of the reigning world champion Cubs with a letdown performance against the Reds. A quick two game sweep would be ideal, but that may be hoping for too much. The Yankees will likely split these two games in Cincy, winning the first and falling short in the second. On the other hand, an outright sweep is a realistic possibility so let's hope the pitching and offense show up simultaneously these two games.