By Unknown - May 24, 2017
After splitting the first two games of this four game series against the Royals, the Yankees looked to get back on track against the struggling Jason Hammel, who entered the game with a 6.20 ERA. To the surprise of many, this game evolved into a pitcher's duel, as both Luis Severino and Hammel turned in outstanding starts for their respective clubs. Luckily for the Yankees, Severino was outright dominant, shutting out the Royals over eight innings. With the help of some timely offense, the Yankees strung together a win. The Bombers head into tomorrow's matinee with the goal of taking three of four from the lowly Royals, though that may be a tall order with Masahiro Tanaka, who has been downright awful this season, on the mound. 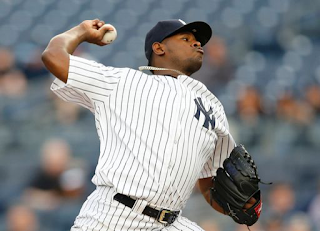 
The story of this game has to be Luis Severino. Though the young right hander has pitched much better on the road than at home this season, he broke that trend this Wednesday evening, as he turned in arguably his best start of the season, shutting down the Royals over eight dominant innings of work.

The Yankees were able to strike first in what shaped up to be a pitcher's duel early on. Didi Gregorius put the Bombers on the board in the bottom of the third with a solo home run to right field, handing the Yankees an early 1-0 lead. 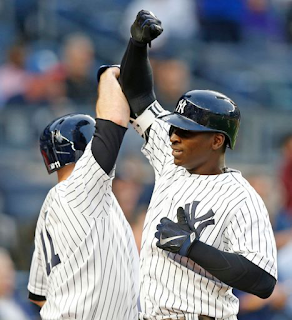 Gary Sanchez led off the bottom of the sixth with a single. El Kraken proceeded to steal second. Salvador Perez's errant throw went in to center field, enabling Sanchez to move to third. The next batter, Matt Holliday, hit a sac fly to right field. Sanchez scored to extend the Yankees lead to 2-0.
Though not known for his speed, Sanchez's ability to manufacture a run in this tight game was quite impressive. With two outs, Aaron Judge hit a single up the middle. Aaron Hicks, brought in for Jacoby Ellsbury who exited the game with a sprained neck and concussion as he recorded the first out of the game, hit a ground rule double to left field. The Yankees were set up with runners on second and third with two outs for Chase Headley. The struggling third baseman popped out to third. Headley may not have gotten the memo yet that he's on notice. Gleyber Torres's recent promotion to Triple-A should be serving as a wake-up call for the much maligned third baseman. 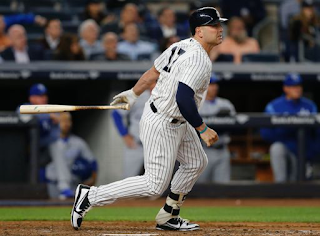 Severino preserved the shoutout by continuing his dominance in the seventh inning. With a runner on first and one man out, Severino induced Jorge Bonifacio to hit into an inning ending double play.

The red hot Gregorius led off the bottom of the seventh with a ground rule double just out of the reach of Bonifacio in right field. With Gregorius on third and one out, Gardner singled up the middle with two strikes, making it 3-0 Yankees. Severino continued his dominance up until the eighth inning. Interim closer Dellin Betances relieved Severino in the ninth to close out the Bombers' 3-0 victory.

Tonight's victory brings the Yankees back to 10 games over .500, as they now sit at 27-17. Due to the Baltimore Orioles defeat at the hands of the surprisingly good Minnesota Twins, the Yankees extend their first place lead to 2.5 games.