By Unknown - May 03, 2017
Jacoby Ellsbury hitting cleanup? I never thought I'd see the day. To my surprise, this decision has worked out surprisingly well. Despite the questionable logic behind having a traditional leadoff hitter in the cleanup spot, the Yankees have continued to win. I may have berated Joe Girardi for this lineup configuration, but since the team has played so well, I will retract my complaints for the time being. The imminent return of Gary Sanchez, along with the rise of Aaron Judge, has prompted me to think about how the Yankees will reconfigure their lineup upon Sanchez's return. Below, you will find what I believe is the best lineup the Yankees can run out on a daily basis. This year, the Yankees have the most offensive talent they've had in at least the last five years. For all intents and purposes, this is a good problem to have. 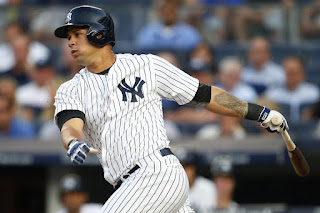 To begin, Jacoby Ellsbury and Brett Gardner are interchangeable in the leadoff and nine slots. Both are speedsters, who in an ideal world, will set the table for the RBI guys. I personally do not believe Girardi has the guts to bat either of these outfielders in the nine slot. If he did, however, it would have to be Gardner. The Yankees may not want to insult the $153 million man. Gardner has been hitting well as of late, and he did hit two home runs last night. If Ellsbury is out for an extended period of time with his elbow injury, my ideal lineup may be subject to change. After all, when Ellsbury gets injured, you never truly know how long it will take for a full recovery. For the sake of this piece, I am assuming the team is at close to full strength. It's worth noting that Aaron Hicks will see his share of at bats too, so the lineup will be subject to change when he is in the order as well.

Throughout most of his tenure with the Bombers, Gregorius has found himself at the bottom of the lineup. I think it's time to see how he performs in the two-hole. Gregorius has shown a tendency to get on base, and help set the table for the RBI-guys in the middle of the order. Based on the progression we've seen from the young shortstop over the last few years, and his performance since returning from the DL last week, Didi has earned a shot to make it happen at the top of the order. 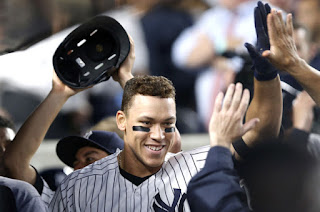 Determining who would be the three, four, and five hitters was probably the most difficult aspect of putting together my lineup. Gary Sanchez, Aaron Judge, and Matt Holliday all bring consistent right-handed power that has been missing from the Bronx since the days of Alex Rodriguez's prime. I am more than certain that Joe Girardi, at the urging of his ever famous binder, would find this grouping of righties problematic, but I don't care. Judge has indisputably earned a promotion in the lineup. With the scorching hot Judge serving as his protection, Sanchez will have an excellent opportunity to get hot once he returns from the DL, presumably this weekend. Holliday's veteran presence behind these two young studs will balance and round out the middle of the Bombers' lineup.

If it weren't for Judge's tremendous start to the season, Starlin Castro would probably be garnering more attention for the impressive numbers he has put up thus far. Castro's tendency to get on base makes him an interesting option for the two-hole; however, his power numbers make an effective argument for him to bat sixth. As a switch hitter, Chase Headley can fit in multiple spots of the lineup. While Headley could also slide into the two-hole, at least until he starts to cool down, I'm pretty content with leaving Didi there for the foreseeable future. The fact that Headley, in spite of his hot start to the season, is a viable option for the seven-hole is a further attestation to the depth that this Yankees squad has on offense. 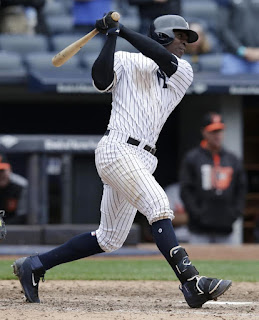 First base has been an unexpected problem for the Bombers this year. Greg Bird has gotten off to a horrid start, and Chris Carter hasn't been much better. With Bird now on the 10-day DL, Carter will be getting most of the playing time over at first. Having the National League home run leader bat eighth may seem illogical at face value; however, his power is about all he brings to the table. He's clearly the worst offensive player in the lineup. Instead of batting Carter ninth, hiding him in the eight hole would allow the Yanks to add a new level of versatility to the lineup. With Gardner batting ninth and Ellsbury leading off (or vice versa, for argument's sake), the Yankees are formidable at both ends of the lineup. After the first inning, it doesn't really matter who is the leadoff hitter as the game progresses.

The Yankees have a lot of different ways that they can structure their lineup. As I noted earlier, this is a very good problem to have. The Bombers haven't had a lineup this deep since at least 2011. The combination of table setters, power hitters, and players who can do both has been pleasant to watch. With the exception of first base, the Yankees have gotten ample production from every position. Despite the injury to Sanchez, who coming into the season was looked at as the Yankees' best offensive player, the offense has been clicking on all cylinders. Sanchez's return, however, provides the Yankees with a conundrum. Back-up catcher Austin Romine has been an excellent nine-hole hitter. His move to the bench in favor of Sanchez will force the Bombers to reconfigure their lineup. I think my solution will work best, but of course it is isn't the only viable option.

What do you think of this proposed lineup? Feel free to comment, or tweet us your thoughts!