By Spencer - May 29, 2017
In a low scoring battle on Memorial Day, the Orioles ended their seven-game losing streak, winning 3-2. The Yankees offense was once again average against former top prospect Dylan Bundy and Co. The Yankees fall to 29-19, but still remain 3.5 games ahead of the Orioles, who are now third in the grind of the AL East. 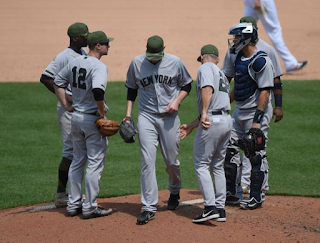 Scoring got started early, as the Orioles had three singles in the first inning, including a Mark Trumbo hit that knocked in Joey Rickard to take an early 1-0 lead. The Yankees quickly answered back in the top half of the second, as Aaron Hicks hit a sacrifice fly to knock in Starlin Castro, who was hit by a pitch to lead off the inning. Despite 56 pitches from starter Jordan Montgomery in the first two innings, the Orioles were still only able to manufacture one run. They did score two in the third, which would turn out to be the winning runs, after Trumbo reached via error by Castro. Jonathan Schoop hit a double to right to make it 3-1 Orioles, giving them the lead for good. The Yanks had a few chances, including multiple lead off singles and a leadoff double, but weren’t able to knock any in. Aaron Judge made things interesting in the seventh, as he reclaimed the AL and MLB lead in homers, hitting his 17th of the year. 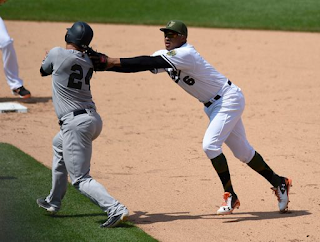 Jordan Montgomery, who falls to 2-4 now on the season, was highly inefficient in his work on the mound. He continued his average season by going 4.1 innings, allowing eight hits and three runs, while just one was earned. He also walked one and struck out five before being replaced by Jonathan Holder. The bullpen performed very well today, as Holder and Chasen Shreve combined for 3.2 innings, allowing no hits and striking out six.

Dylan Bundy pitched seven solid innings for Baltimore, continuing his very impressive start to 2017. He has had a quality start in all but one outing this season so far, as he only allowed seven hits and two runs today. Darren O’Day and Brad Brach came on to close out the last two innings, as they both pitched one-two-three innings, while also combining for three strikeouts.

Tomorrow the Bombers send arguably their best pitcher to the mound, as youngster Luis Severino gets the start (3-2, 3.11 ERA) against Chris Tillman (1-1, 4.43 ERA), who has struggled to regain his 2016 form. The Orioles will look to get the series win against the second best team in the AL.