By Unknown - May 14, 2017
The Yankees bullpen picked up Luis Severino’s slack in an 11-6 win against the Astros. A six-run seventh inning led by a Starlin Castro RBI double to tie it, and a three-run triple for Chase Headley to take the lead capped off a great come from behind victory, the Yanks tenth of the year. 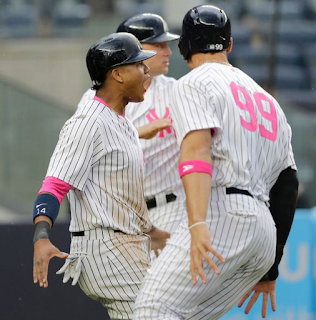 The Yankees headed into Sunday’s 2:05 start time after Saturday’s game was postponed due to rain. Slated as a day dedicated to the retirement of Derek Jeter’s number, the game preceded number 2's ceremony.

Just before the game, the Yankees received some bad but expected news regarding Aroldis Chapman. With inflammation in his throwing shoulder, the Yankees placed the lefty flamethrower on the 10-day disabled list. Chapman’s last two outings have been anything but pretty. With a 4-1 lead against the Cubs, Chapman blew the save and couldn’t get out of the inning. Just a few days later against the Astros, Chapman entered in the 9th down 4-0 and allowed an earned run. Like last time, skipper Joe Girardi pulled him because of his high pitch count. The Yanks would drop the contest by a score of 5-1.

Luis Severino looked to build on a very impressive start at Wrigley. The 18 inning, six hour and five minute game that included an MLB record 48 combined strikeouts ended with a 5-4 Yankees victory. Severino went seven solid innings allowing just one earned run while striking out nine and walking just one. 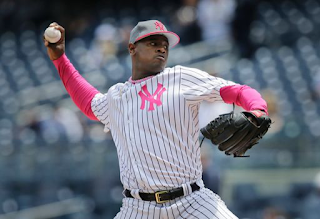 
The Yankees, sporting their Mother’s Day pinked trimmed uniforms, combined with a patch celebrating Derek Jeter’s number retirement, looked to snap a three game skid with Savvy on the bump.

The 26-pitch first inning for Severino against the ‘Stros ended without a run or a hit from the Astros, although two men reached base via the walk. Gardner led off the bottom of the first with a double down the first base line to continue his hot hitting in May. Ellsbury would move him over with a groundout to first base. Matt Holliday would drive him in with a broken bat groundout to first base of his own, and the Yanks took an early 1-0 lead.

Sevvy would continue to lack control into the second inning, walking Gonzalez and the giving up a single to Gurriel. Bailed out by a 5-4-3 double play and a big strikeout against Aoki, the Astros stranded a man at third.

A bloop double by Didi in the bottom half of the inning would prove to be pointless, as Headley and Carter struck out (shocker) back to back.

Severino allowed another free base hitting Springer with a fastball. Correa would single home Springer, Evan Gattis would single home Altuve, and Gonzalez would single home Correa to put the Astros up 3-1. With the bases loaded and a 76 pitch count, Girardi pulled Severino to go to right-hander Chad Green, recently pulled up from AAA. Severino’s line ended with 2.1 IP, 6 H, 3 ER, and 3 BB. Green would force a 5-4-3 double play to end the frame.

In the bottom half of the fourth, with rain starting to fall heavily, Starlin Castro and Aaron Judge hit back-to-back home runs off of Astro’s starter Mike Fiers to take a 4-3 lead. The homers were number seven and number 14 on their year for Castro and Judge, respectively. Fiers left the game shortly after.

The Astros would retake the lead in the top half of the seventh. Evan Gattis singled home Josh Reddick to tie the game at four. Jose Altuve scored on a throwing error by his opposite number, Starlin Castro. After Gurriel’s sacrifice fly, the Astros took a 6-4 lead.

The bottom the the seventh was eventful for the Yanks against a tough Astros bullpen. Gardy led off with a single, followed by an Ellsbury double to left-center field. Matt Holliday’s 112 MPH infield single scored Gardner to cut the Astros lead to one, but that lead wouldn’t last long. Castro hammered an RBI double off of the very tough Chris Devenski down the right field line. With the bases loaded and one man out, a slumping Chase Headley had the biggest hit of the day. A bases clearing triple scored Holliday, Castro, and the intentionally-walked Judge. Even Chris Carter got in on the action, following Headley with a double down the left field line.

After sending nine men to the plate in their half of the seventh, the Bombers tacked on another run with a solo shot from Brett Gardner. Gardy has been absolutely red hot lately hitting .359 with four bombs this month so far.

Overall, a solid win for the Yanks in game one of the double header. Green, Warren, and Holder were strong out of the pen, and the Yanks bats erupted late. Tanaka will take the bump in game two to look for a day/night sweep to even the overall series at two games apiece.