By Chad Raines - May 16, 2017
Yankees look to rebound after dropping three of four to the Houston Astros, welcoming a lackluster Kansas City Royals to Yankee Stadium for a three game set. New York still holds a razor-thin half game lead on the AL East but would like to put more distance between themselves and the Orioles before a major clash with the Boston Red Sox on the weekend. Joe Girardi and his team must believe that at least two wins over KC is not only possible but necessary to continue the team’s momentum. 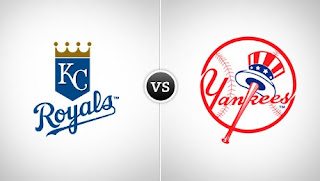 Neither CC Sabathia nor Jason Hammel have impressed much in 2017, so each offense will need to be ready to bail each pitcher out. For Sabathia, it will be the early innings that define his start as he has an enormous 8.14 ERA in innings one through three this season. He is able to calm the game down from there but that start will give Yankee fans some hesitation as relying solely on hitting is not always a reliable game plan.

Hammel on the Royals is hittable. He gave up 13 hits in his previous start against the Tampa Bay Rays, a sign that should be hopeful to New York. It should be especially hopeful to Starlin Castro who is 4-for-6 in his career against Hammel. Brett Gardner should also be a force after a 6-for-9 day against the Astros on Sunday.

The Yankees haven’t officially named a starter for this game but it will most likely be Michael Pineda who pitched last Thursday. He started a bit shaky but held the Houston Astros to just two runs over 6.2 innings. The 28-year old is one of the team’s best pitchers this season but is still wildly inconsistent despite his seemingly low ERA. The Royals as a whole have had trouble hitting so it is likely that Pineda’s strikeout capability will be on display.
The Royals will send veteran left-hander Jason Vargas to the mound. Vargas has been strong in seven starts this season, posting a 1.01 ERA and five wins. He last pitched on May 11th against the Tampa Bay Rays, throwing seven scoreless innings. This will be the toughest test for the Yankees in the series as the offense will need to topple a starter who has given up a total of six runs all season long.

Jordan Montgomery will have something to prove following a lackluster start against the Astros on Friday night. He pitched six innings, surrendering four runs. His strikeouts were up and he did have moments of showing control of the game. However, he’ll need to keep his ERA down. This may not end up being too difficult against a sputtering Royals offense.

In response, the Royals will send Danny Duffy to the mound. His 2-3 record doesn’t reflect his recent quality starts. After getting bombed for six runs against the White Sox earlier this month, Duffy posted strong numbers against the Indians and Orioles. He is also less susceptible to the home-run ball having only given up two all season and none since April 8th.

Keys to the Series for the Yankees:

Pitching Needs to Keep Them in the Game
The starting pitching needs to keep New York in the game. The offense has been firing but had to dig out of multi-run holes in each of their last four games. The confidence of the bats isn’t waning but opposing teams are figuring out how to win against a team that surged in April. Aroldis Chapman being on the 10-day DL also won’t help but the bullpen should have more than enough to compensate for the loss of the closer.

Sanchez Still Hitting
Gary Sanchez has started to heat up in May after a slow start to the season. He has hit in all but two games in May and got his average up to .260. It may not look like much now but he is batting .333 this month and doing so without the long ball. His continued success takes pressure off of Aaron Judge who has shown little signs of slowing down but will need the support.

Matt Holliday Needs to Play First Base
Chris Carter has been a complete miss thus far this season and Girardi has insisted in him playing first base. He has only five hits this month, spanning 10 games and an average barely above .200. Holliday has been the exact opposite this month, hitting .308 and slamming three home runs in May. He may not be the best defensive option but the team needs a spark in the lineup from that position. Holliday has proven to still have something left in the tank and could be a key to success against some of the better Royals pitching.

Keys to Success for the Royals

Get Ahead Early
The Yankees do not have a strong platoon of starting pitchers and teams that have found success have done so by getting ahead early in the game. The more runs you can score before the bullpen is summoned, the better. New York scores in bunches, especially late in the game so striking at their confidence will be important for the Royals in this series.

Keep the Momentum Going
The Royals were left for dead in the month of April but have won six of their last seven and feel like a brand new team. They are also on fire having just swept the Baltimore Orioles at Kauffman Stadium. This will be their last series before a 10 game road trip so getting another series win against a top American League team will be important to their continued success.