By Ryan Thoms - June 06, 2017
With the second National League update for All-Star voting being released yesterday, there was much anticipation to see how the American League would shape up. Luckily, these All-Star updates are done by Major League Baseball to give fans an idea of which deserving or undeserving players currently hold the top spots for their respective positions. For example, a player that has played horribly, like Manny Machado, is now no longer starting for the American League. How did the Yankees fare in this second update? 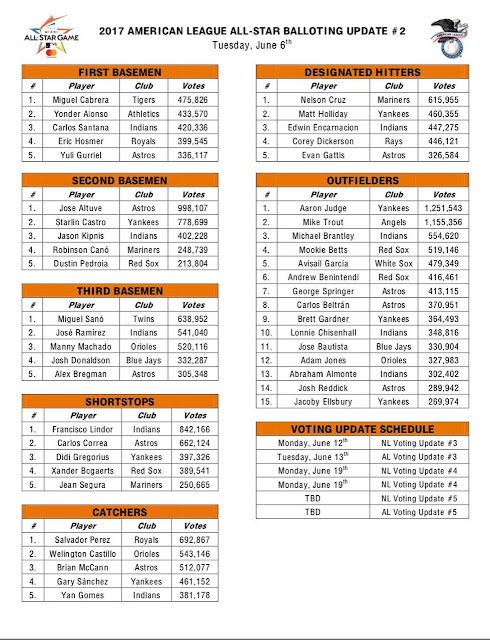 Aaron Judge fans rose to the occasion and have officially made Judge the leading vote receiver for the entire American League, not just among his fellow outfielders. Judge currently has a whopping 1,251,543 votes, which is almost 100,000 more than Mike Trout. Judge is coming off his second consecutive rookie of the month award and is establishing himself as an MVP candidate in the early going.
Starlin Castro is no longer projected to start the game as his slim lead over Jose Altuve is now gone and Altuve leads Castro by approximately 220,000 votes. Castro still has a pretty hefty lead over third place Jason Kipnis, so not all hope is lost for the Yankees second baseman.

Other players have moved up and down the rankings since the last update as well. Matt Holliday is now second among designated hitters as he surprassed the scuffling Edwin Encarnacion this week and is now trailing Nelson Cruz by only 155,000 votes for the starting position. Didi Gregorius now has more votes than AL East rival short stop Xander Bogaerts and is third among American League short stops. Brett Gardner moved up to ninth among outfielders from eleventh, and the injured Jacoby Ellsbury is now down to fifteenth from twelfth. Chase Headley disappeared off the rankings for third baseman completely, and Gary Sanchez remains fourth among catchers, but the race is still close.
There is still plenty of time to go out and vote for your favorite players and get deserving Yankees into the game! Remember to vote for Aaron Hicks, you have to write-in his name as he is not on the ballot. Click on the link below to go vote. You can vote five times a day. Go Yankees!