By Unknown - June 18, 2017
The West Coast woes continued for the Bronx Bombers on Father's Day, as they dropped their sixth straight game. The last place Oakland Athletics completed a four-game sweep of the Yankees with a 4-3 victory. Filling in for the injured CC Sabathia, Luis Cessa was unimpressive, and after showing signs of optimism early, the Yanks' offense faltered after the fourth inning. 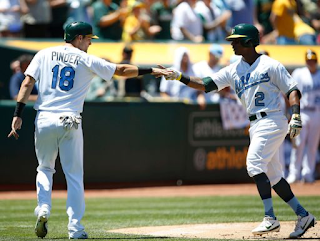 
The Yankees got on the board first courtesy of a Matt Holliday solo home run to lead off the second inning. Brett Gardner led off the third with a double. Two batters later, the hometown hero, Aaron Judge, laced an RBI single into right field, giving the Bombers an early 2-0 lead.

As has been the case for most of this dreadful West Coast swing, the Yankees yet again surrendered an early lead. The bottom of the third inning was rough for starter Luis Cessa. With two runners on, Chad Pinder doubled to center field, tying the game at two. With Pinder still on second, Khris Davis hit a home run to deep center field, handing the A's a 4-2 lead. 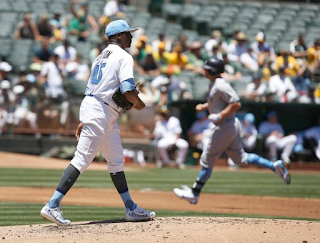 The Yankees inched a bit closer in the top of the fourth. Didi Gregorius continued his hot hitting with a home run to right field. The homer was subsequently reviewed, with the end result upholding the initial call, bringing the Yankees to within one run of tying the ballgame. This as as close as they would get.

Getting anything else together offensively for the Yankees was a struggle on this hot Sunday afternoon. Gregorius reached second with one out on an errant throw from shortstop Chad Pinder, but interim closer Sean Doolittle easily retired Chase Headley and Chris Carter to seal the deal.

The one bright spot on the day, however, was the much anticipated return of closer Aroldis Chapman. After a long stint on the disabled list, Chapman returned to pitch a scoreless eighth inning. Chapman's return is a much welcomed addition to a Yankees bullpen that has imploded over the past week, at one point blowing four straight late inning leads. 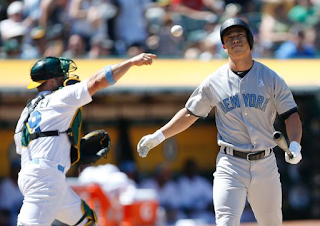 The Yankees will happily return to the friendly confines of the Bronx when they begin a three game series against the Los Angeles Angels on Tuesday night, following Monday's much needed off day. This West Coast road trip, on which the Yankees went 1-6, was an unmitigated disaster. After suffering six crushing defeats at the hands of both the Angels and A's, the Yankees may have hit rock bottom on the season.