By Unknown - June 02, 2017
Heading into the 2017 season, the Yankees were counting on Greg Bird to be an integral part of the upcoming youth movement. To the team's dismay, Bird was horrendous prior to landing on the disabled list with an ankle injury that dated back to spring training. Ever since Bird's DL stint began, Chris Carter has been filling in at first for the Bombers. To put things nicely, Carter has been less than ideal. In 106 at bats, as of Friday, Carter is hitting .179 with only 4 home runs, 14 RBIs, and an alarmingly high 46 strikeouts. With Bird, and Tyler Austin, working their way back from injuries, Yankees fans can only hope that Carter's time in the Bronx is nearing an end. Below, I provide injury updates on Bird and Austin, along with predictions on what will happen when both Baby Bombers are healthy enough to return to the Bronx. 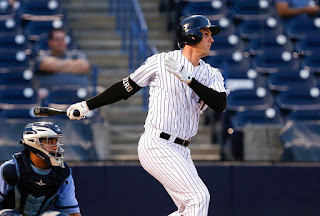 Despite getting off to a scorching hot start in spring training, Bird struggled at the onset of the 2017 season. The Yankees attributed these struggles to the bruised right ankle Bird suffered near the end of the spring, subsequently placing him on the DL in early May. In 19 games this season, Bird went six-for-60 with only one home run and three RBIs.

The Yankees have been clear that they will not activate their young first baseman from the DL until he is 100 percent ready. Bird has been working his way back in both Tampa and the Bronx for the last few weeks. This week, however, has been an important step forward for Bird. This past Wednesday, Bird played three simulated innings for Class-A Tampa. On Thursday, Bird played six innings for Tampa, reaching base in all three of his plate appearances. The 24-year old is expected to get a few more games in before being considered major league ready. Assuming Bird's progress continues to go well, the Yankees could expect him back in the lineup at some point next week. 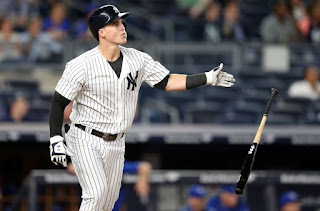 Tyler Austin has been sidelined ever since he suffered a fractured foot during batting practice prior to the start of spring training. Austin was slated to provide the Yankees with a versatile option off the bench who could spell Bird at first place. The 25-year old can also play both corner outfield positions and third base. During a small sample size of 31 games in the Bronx last season, Austin hit .241 with five home runs and 12 RBIs. Of those five homers, one came in his first at bat and the other was a dramatic walk off home run in September.

When Bird returns, he will likely supplant Carter as the starting first baseman moving forward. If Austin is recalled to the Bronx following his rehab assignment, that would likely mean the end of Chris Carter's troubled tenure in pinstripes.

In 11 games split between Double-A Trenton and Triple-A Scranton Wilkes-Barre, Austin is 14-40 with a home run and four RBIs. The Yankees have to be encouraged by Austin's performance thus far in the minors. Anyone, I repeat, ANYONE is a better option than Carter. His return is imminent, perhaps more so than Bird, so we should keep an eye on Austin the next few days. Furthermore, Austin continued to rake this Thursday, collecting hits in three of his four plate appearances.


It's a miracle that the Yankees currently sit in first place in the American League East, despite getting nearly no production out of the first base position. One would think that Carter, who led the National League in home runs last season, would have been able to perform competently after receiving more playing time once Bird went down. Unfortunately for the Yankees, this has not been in the case. It's become so bad that the Yankees even started Rob Refsndyer at first for two consecutive games in Baltimore. With the return of Bird and Austin on the horizon, Carter's time in pinstripes will hopefully come to a conclusion at some point next week.

As a Yankees fan, I'm ecstatic to welcome both Bird and Austin back to the Bronx. It's time to finally get some production out of first base, and these two are more than capable of providing it.