On this day in Yankees history: Phil Hughes' complete game gem vs. Detroit

By Andrew Natalizio - June 03, 2017
For most fans like myself, Phil Hughes was more or less a disappointment in pinstripes, never living up to his star potential the Yankees thought they were getting when they drafted him 23rd overall in the 2004 MLB Draft.  Over seven seasons in the Bronx, Hughes went a combined 56-50 with 4.53 ERA. Following the 2013 season, one in which he went a pathetic 4-14 with a 5.19 ERA over 29 starts, the Yankees elected not to re-sign Hughes.  He would sign a three year, $24 million contract with the Minnesota twins that December, and after an extension in 2014, he'll be with the Twins under contract through 2019.


For one shining afternoon in Detroit in 2012, however, Hughes out-dueled the reigning American League Cy Young and Most Valuable Player, Justin Verlander, in a 5-1 Yankees victory.  This is no small feat when you consider the stacked lineup the Tigers had that year, anchored by Prince Fielder and the 2012 MVP and Triple Crown winner Miguel Cabrera. This was also, of course, the same Tigers team that would ultimately sweep the Yankees in the 2012 American League Championship Series.

Right from the start in this one, the Yankees gave Hughes a lead.  Derek Jeter would lead off the game with a home run against Verlander and Curtis Granderson would score on a Mark Teixeira sac fly after reaching on a walk.  Hughes, on the other end, had no trouble retiring a potent Detroit lineup all day, as he allowed just four hits, three walks, and one run (a fourth inning Prince Fielder home run) across all nine innings.  He would also rack up eight strikeouts and throw a career high 123 pitches.


These days, when he's not on the hill for Minnesota, you can find Hughes as one's of Twitter's biggest jokesters.  For a guy who has struggled to live up to his potential, he is certainly not short on humor. 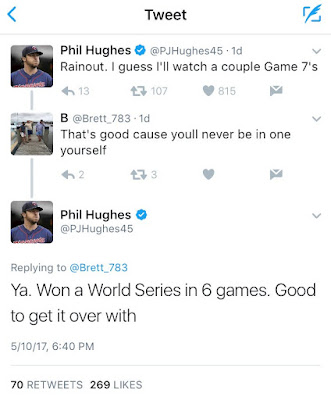 While Hughes' Yankees tenure, on the whole, will be remembered way more about all the home runs he gave up, his inability to put hitters away in two-strike counts, and his ultimate failure to live up to the sky high potential he had, I wanted to throw back to this game today as a reminder of what could have been, had he been able to flash more of this type of stuff on a regular basis.