By Anthony Merced - June 23, 2017
The Yankees welcome the Texas Rangers into Yankee Stadium this weekend with the specter of one win in their last nine games hanging over the club. The horrendous west coast trip didn't stop their free fall as they lost two out of three to the Angels and could see themselves permanently falling out of first place without a series win. The team's strong home record is still a plus as they are 12 games over .500 at the Stadium. Still, they will need solid pitching from a shaky group to re-establish confidence in a side that looked as if they were cruising to a division win just two weeks ago. 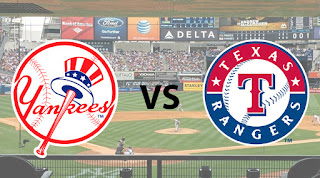 Oddly enough this will be the first time that Masahiro Tanaka will pitch against his former Nippon League compatriot Yu Darvish. The two achieved legendary status in Japan before moving to the United States with great fanfare. Darvish has been solid but not quite the lights-out pitcher many were expecting. On the other side Tanaka has struggled greatly, battling injury and having difficulties adjusting to Major League hitters.

Darvish is coming off one of his worst starts of the season last week when he pitched only 5.0 innings and gave up five runs. The right-hander didn't seem to have his best stuff but his season overall is much better than Tanaka's. Darvish's 3.35 ERA is quite respectable and he does eat up innings for the Rangers.

Tanaka is still looking to find his way into the 2017 season. Excuses have circled the maligned pitchers as complaints about the ball are coupled with rumors of injury. Manager Joe Girardi is keen on getting the Japanese ace going this season but he will need to up his innings and keep the runners away from home plate. Two starts ago it appeared he got back on track, going 6.2 innings, giving up only three runs against the Angels. However, he did not instill confidence in his last start, pitching only 4.0 innings and giving up five runs.

The Yankees will send right-hander Luis Cessa to the mound for game two of the series against the Rangers, hoping that he can find his groove. The 25-year old has made two starts for the team this season, both losing efforts while not clocking many innings on the mound. His last start against Oakland was the worst of his two, having pitched 4.0 innings and surrendering 4 runs. Should Tanaka not provide innings for the team, this game could be difficult on the bullpen.

Cessa's opposition will be Austin Bibens-Dirkx. The 34-year-old right-hander has been inconsistent, unable to provide innings at times and at other times showing sings of dominance. His last start against Toronto fell into the later category, throwing 5.0 innings and giving up 5 runs. The Yankees may be able to get to him early and push their way into the bullpen. They will need to be cognizant of their need for runs to pad what could be a potentially high-scoring affair.

Michael Pineda is looking to avoid three straight losses for the first time this season and could be the deciding factor in whether or not the Yankees win the series. Pineda has been the most consistent pitcher for New York, throwing at least five innings dating all the way back to his first start in April. His last game, a loss to the Angels, was particularly tough since he threw into the sixth inning, only giving up three runs.

Opposite him will be Nick Martinez. The right-hander his been strong this season for the Rangers, pitching 6.0 innings at least in his last two starts. He also hasn't allowed more than two runs in a game since May. The 26 year-old has yet to face a lineup like New York's. However, this has the makings of a pitcher's duel more so than any of the other match ups in this series.

Masahiro Tanaka
Something's got to give for Tanaka as he is now in June and can't seem to find his groove. It appears as if Girardi isn't going to give up on him but the pressure of giving at least a quality start is certainly weighing his decisions. Tanaka may still prove to be an asset to the team. However, it was anticipated that he would be doing the heavy lifting for the rotation and that hasn't been the case thus far. Add on the international flavor of his match up against Yu Darvish, and this could be a make-or-break game for the Japanese ace.

Aaron Judge
All is right in the court of Aaron Judge. The star rookie hit is 25th home run of the season in a losing effort against the Angels. In fact, Judge has shown little sign of slowing down as he continues to be a major triple crown contender in 2017. He has also shown an unwavering ability to do his portion, despite some of the issues the team faces on other sides of the ball. The Yankees will need him to keep this up if they hope to hold on to their position atop the American League East.

Carlos Gomez
A two-home run performance by Carlos Gomez should put the Yankees on notice as he is one of the more dangerous threats on the Rangers roster. New York isn't unfamiliar with Gomez who got his start with the Mets. However, the outfielder has come into his own, riding a 10-game hitting streak. His .267 average highlights his slow start but don't be fooled. Gomez is quickly catching up with the pack this season.

Adrian Beltre
Beltre has added a much needed boost to the Rangers offense since returning to the team in late May. He has hit safely in seven of his last eight games with a multi-hit game in the final game against the Blue Jays. His average is now nearing .300 and he could be what Texas has needed to get their season going. The Yankee pitching, which has been susceptible to the home run ball, will need to be cautious around Beltre.