By Ryan Thoms - June 19, 2017
After a horrendous road trip, the New York Yankees’ comfortable first place lead in the American League East is now history. The Yankees are currently in the midst of a six-game losing streak, which is by far their longest this season, and to make matters worse, four of those losses were to a last place Oakland Athletics team. Fortunately for the Bombers, they have played extremely well at home this season and are playing an injury-ridden Angels team that has a lot of holes. However, the Angels did take 2-of-3 from the Yankees last week in Anaheim, but the Yankees had opportunities to win each of those games. Before arriving to New York, the Angels lost 3-of-4 to the Royals. In the words of Matt Holliday, “These are the times you find out what you’re made of as a team.” Here are the matchups and players to watch for the series: 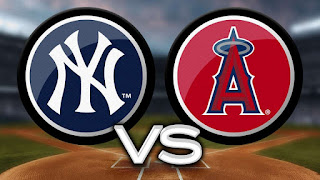 With injuries hampering their starting the staff, the Angels will turn to former Baltimore Oriole farmhand Parker Bridwell for game one of the series. The Yankees got a glimpse of Bridwell in last week’s series when he pitched in long relief in place of the injured Matt Shoemaker. Bridwell did not allow any runs to score, but scattered seven hits and only struck out one batter over three and two-thirds of an inning worth of pitching. Bridwell has pretty mediocre numbers in eight minor league seasons (4.74 ERA) and his career four BB/9 does not match his single walk in almost ten innings pitched in the Majors this season. Pitching in the Bronx against one of the best lineups in baseball for his second career Major League start has disaster written all over it.

The Yankees will oppose the Halos with Michael Pineda. Pineda has pitched poorly in two of his last three starts including his previous start against the Angels where he allowed five runs in six innings of work. Pineda has been one of the Yankees’ most reliable starters this season, but as of late, his inconsistency is shadowing his previous few seasons with the Yankees. Pineda has the stuff to dominate this lineup, but the key to a quality start will be to locate his fastball and to back it up with his potentially devastating slider. If the offense does what it is capable of against a mediocre pitcher, this game should be very winnable for the Yankees.

Veteran Ricky Nolasco will pitch in game two of the series for the Halos. Nolasco has never been a dominant starter in his 12-year career, but his ability to eat innings has kept him on rosters since he broke in with Miami. Nolasco has been among the worst starters in the American League this season and his eight losses were not what the Angles predicted would follow a quality 2016. The current Yankees have owned Nolasco as they have a combined .372 average against him in their careers. To make matters worse, Nolasco has allowed a league leading 21 home runs in 2017, (believe it or not Tanaka has not allowed more than Nolasco) which spells danger against a Yankees team that has been hitting home runs at a historic pace.

Jordan Montgomery will oppose fellow the veteran pitcher, in game two. Montgomery was not on his game in Oakland, broke a streak of five consecutive starts where he allowed two earned runs or less, and it was the first time he had allowed multiple home runs in a single game. With a favorable offensive matchup, the Yankees need Montgomery to give them six or seven quality innings and keep them in the game. Aroldis Chapman’s return will allow the Yankees to shorten games with a dominant back-end of the bullpen, and it is more crucial than ever that Montgomery and the other starters provide length, while every reliever outside of Chapman and Betnaces has a big question mark surround their capabilities.

Swingman Jesse Chavez will pitch the series finale for the Angels. Chavez has bounced back in forth between starting and pitching in long relief in his career, but he has been used primarily as a starter for the Angels in 2017. Chavez is another starter that the Yankees can easily hit hard, if they attack his fastball early. Chavez relies on movement and location and has the potential to toss quality starts on a nightly basis. However, his stuff is average and he lacks velocity, so if his location is off, he is extremely hittable. Chavez allowed only two runs over seven innings in his previous start against the Royals.

The Yankees will send their 2017 ace, Luis Severino, to the mound to oppose Chavez. Severino has been the Yankees best starter this season and is on pace to potentially make his first ever All-Star appearance. Severino had a rough start in Oakland, (there’s a trend here) but was able to settle down and only allow four hits and strike out six. The bullpen eventually blew the game, which he was lined up to win. The Severino in Oakland is not the Severino that Yankee fans should expect to show up Thursday in the Bronx. Expect Severino to stifle Angel hitters and be given more than enough run support to secure the victory.
Players to watch:

The bullpen
The Yankees bullpen was unbearably painful to watch on the road trip as no lead ever felt safe and leads were blown multiple times in favorable situations. The addition of Chapman should allow Girardi to slowly start not needing to use certain relievers in game-changing situations and pushes everyone back a spot in the bullpen depth chart. If the Yankees want to get back on track and prove they’re not a fluke, the bullpen needs to step up. If they cannot, the Yankees front office needs to acquire or call up pitchers who can do their job.
Luis Severino
Other than Tanaka, the Yankees’ starting pitching could have been worse over the span of their current six game losing streak. The starters gave the Yankees a chance to win, but none of them gave the Bombers extra length or turned in an eye-popping performance. Severino’s matchup against Chavez has all the makings to be a dominant performace. The Angels have seen very little of Sevy as their current players have combined for a mere 11 total at-bats against him in their careers. That lack of exposure and the fact that hitters are hitting a lowly .176 against him in the month of June should be the perfect combination for Severino to pitch another solid game.

Gary Sanchez and Aaron Hicks
Gary Sanchez and Aaron Hicks, two of the Yankees’ hottest hitters in June, both gave Yankee fans a spine-tingling scare, when they were both removed in the same game due to injury. After sitting out some of the Oakland series, both players have been cleared to play, and their health will be something to watch in the upcoming home stand. Their production is vital as runs and offensive success will not be taken for granted, as long as the bullpen’s recent struggles persist.

Eric Young Jr.
Yankees fans are well aware of the fact that there are just some players who rake whenever they play the Yankees for no apparent reason. Evan Longoria, Jonathan Schoop, and the recently retired David Ortiz are a few notable “Yankee-killers,” but no one expected Eric Young Jr. to fall into that category in 2017. Young Jr. was a Yankee for a grand total of six games in 2016 and had one measly at-bat. Whether or not this resulted an urge to enact vengeance on his former team is unknown, however, he was a huge factor in last week’s series and it’ll be interesting to see how he fares in the Bronx. He hit .400 with a home run, two stolen bases, and made multiple diving catches to prevent big innings in last week’s series.
Cam Bedrosian
For a team that has a starting rotation that contains little to no intimidation, their bullpen has been a surprising bright spot, and the Halos have finally welcomed back another potent arm in the form of Cam Bedrosian. Bedrosian was their closer for most of April, until a groin injury landed him on the DL for over a month. Former starter, Bud Norris, has been excelling in his new-found role in the bullpen, so odds are Bedrosian won’t close this series. However, Bedrosian coming back further pressures the Yankees offense to attack and score on the lackluster starting pitching and not let the bullpen have a lead late.

The Yankees desperately need a rebound series, after the aforementioned disastrous road trip. Facing an Angels team that has a depleted starting pitching staff should allow the Yankees to capitalize for an outburst of runs and allow their pitching staff to pitch in low pressure situations and regain confidence. If the Yankees offense doesn’t go cold and the bullpen doesn’t implode for the third consecutive series, this series should be a very capable one to win or even sweep.