By Alex Weir - June 15, 2017
The West Coast trip continues for the Yankees on Thursday, as they begin a four-game series against the Athletics in Oakland. With the exception of Tuesday, the Yankee offense has been unstoppable lately, most notably Aaron Judge, Gary Sanchez, and Didi Gregorius, and they’ll look to continue that against an A’s team that they took two out of three from them at the end of May. At 27-38 and 16.5 games out of the AL West, Oakland should be an easy task for the red-hot Yankees. Whether they capitalize on this remains to be seen. 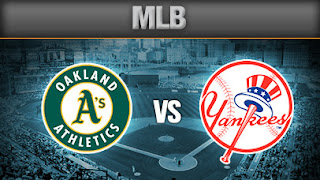 Due to the fact that Aaron Judge has been doing Aaron Judge things this season, Jordan Montgomery has flown under the radar among American League rookies. However, the 24-year-old left hander has pretty much done everything the Yankees could want, especially as of late. In his last two starts, against the Blue Jays and Orioles, Montgomery is 2-0 with a 1.38 ERA, 13 strikeouts, and four walks in 13 innings pitched. Baserunners have been his main problem throughout his young career, but lately he’s been cutting down on them. He will need to continue this on Thursday.

As for the A’s, their former ace RHP Sonny Gray will be on the mound. Gray has been the subject of trade rumors for most of his young career year and after an injury plagued 2016 season where he had a 5.69 ERA in 22 starts, he’s been very average this season pitching to a 4.37 ERA, 46 hits, 14 walks, and 47 strikeouts in 47.1 innings and eight starts. He has the potential to shut down any lineup, so the Yankees need to attack him early and not let him get into a groove on the mound.

This should be one of the better pitching matchups in the series. Both starters are young with a ton of upside, and have pitched really well this year. Severino in particular has been lights out. Ever since that disastrous outing against the Astros on May 14th, Sevy’s numbers are as follows: five starts, 4-0 record, 33.1 innings, five runs, 24 hits, eight walks, 37 strikeouts. That works to a 1.35 ERA in that time, and he’s also struck out at least seven in each game. Severino has flashed signs of pure dominance from the Yanks’ young ace. This game should be a particularly ideal matchup for Sevy due to the fact that the A’s are fourth in all of baseball in team strikeouts, with 590. The magic number of 600 should come easy in this series.
As for Manaea, he has pitched surprisingly this well so far this year, as he has really picked it up as of late. Coming into the last series against the Yanks, he had a 5.24 ERA. Since then, including the scoreless outing against the Yankees on May 26th, Manaea has had four starts, where he’s given up just five runs total and struck out 27 batters in 27 innings. That is not too shabby for a player that had an ERA above five to start the season. He dominated the Yankees that night, so let’s hope the Bombers have followed up with their scouting reports and have a better game plan this time around.

This is a huge game for both the Yankees and Tanaka. The 28-year-old right hander seemed to have gotten into a stride last game against the Angels, where he threw 6.2 innings and gave up just one run with 8 strikeouts. After giving up a homer to Kole Calhoun, Tanaka really settled down and looked like the Tanaka of 2014-2016. He should have his work cut out for him on Saturday, since he struck out 13 in his last start against the Athletics. Let’s hope he continues his recent success. 2017 Tanaka is a not fun pitcher to watch.

Jesse Hahn has not pitched as well as his 3.56 ERA suggest, because he’s given up 60 hits and 21 walks in 60.2 innings this year. However, he’s only given up one homer this year, so the Yankees will need to execute the long ball in order to create an outburst of runs. Hahn has pitched to both extremes this season, so similar to his adversary, his team will not be sure which Jesse Hahn they are trotting out to the mound that day.

For the Yankees, CC Sabathia was supposed to start the last game of the series, but due to his hamstring strain, he will surely miss this start. Some of his possible replacements include Chad Green, Domingo German, or Ronald Herrera. Do not anticipate on this being Chance Adams’ MLB debut unless they plan on keeping him in the rotation for an extended period of time.

As for the A’s, the struggling Jharel Cotton will be on the hill. Cotton has pitched poor in his first full year in the big leagues, with a 5.52 ERA and seven losses. He took a no-hitter into the later part of the game the last time he pitched against the Yankees, however, the Yankees should be able to better execute the second time facing him.  Hopefully the Yanks take advantage of his prolonged struggles and end the series on a good note.

This is arguably Tanaka’s biggest start this season. It is not because he is facing a division rival or even a team in contention. Tanaka had a quality start his last time out and needs to show the Yankees some consistency and that he is trending upwards. Pitching as one of the worst pitchers in the league will not allow someone to last long in a playoff bound rotation.

Gary Sanchez has started to remind people why he was the biggest up and coming star in the Bronx las summer. He has been on fire in June and is slowly making himself a more than qualified candidate to start the All-Star Game. Sanchez’s home run stroke could be vital in this series and will offer added potential and protection to an already potent lineup.
Athletics

Yonder Alonso is in the midst of a breakout season for the Oakland Athletics at first base. This past week he overtook future Hall of Famer Miguel Cabrera for the starting first base postion in the Midsummer Classic. Alonso’s potential to hit home runs in bunches could be very threathening to the Yankees’ pitching staff.

The Athletics are hoping that Gray turns his season around and adds some significant trade value. Gray has been much better than last season, but can no longer demand a haul as great as he once could. Gray has top of the rotation stuff and could make game one a tough one for Yankee hitters.
After dropping two out of three to an average Angels team that lacks Mike Trout, the Yankees desperately need to win this series to go back to the Bronx with some momentum.  A key to the series will be for the starting pitching to take an advantage of a team that is susceptible to the strikeout. The offense needs to hit better with runners in scoring position and have more productive at-bats earlier in the game. Also keep an eye on Gregorius' hitting streak as it could reach 20 by the end of this series.