The Yankees Rotation: How an expected weakness became a surprising strength

By Unknown - June 11, 2017
Heading into the season, it was difficult not to view the Yankees' starting rotation through a lens of skepticism. Fortunately, the naysayers, such as myself, have been proven demonstrably wrong. In fact, about a week into the season, I went out of my way to refer to the rotation as an "unmitigated disaster." With the notable exception of Masahiro Tanaka, the Yankees' starting staff has been one of the best in the league. Whether it be Luis Severino evolving into a dominant ace, Michael Pineda finally finding the consistency that has escaped him during his tenure in pinstripes, CC Sabathia discovering the fountain of youth, or Jordan Montgomery establishing himself as a well-rounded and ready MLB starter, the Yankees rotation has been essential to their hot start, and sustained success. Now, let's see how this seemingly improbable turn of events has transpired. 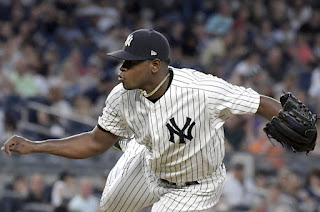 When analyzing the prospects of this Yankees rotation prior to the start of the season, it would have been easy to simply dismiss the group as mediocre. A nuanced take, however, would have more accurately encapsulated the reality of the situation. The starting staff certainly had potential coming into the season, but expecting each starter, or even the majority of them, to have everything go right would have been presuming too much. For the most part, again with the notable exception of Tanaka, such a scenario has indeed occurred. Four of the five Yankees starters are consistently providing the Bombers with quality innings, and a chance to win each time out.

Just a few months ago, many scouts and other talent evaluators believed that Severino was destined for the bullpen. After going 5-3 with a 2.89 ERA over 11 starts in 2015, expectations were set relatively high for the youngster heading into the 2016 season. Needless to say, Severino suffered through a sophomore slump that in 2016 that took him a while to recover from. Severino struggled profoundly as a starter before being placed on the DL, and subsequently demoted to the minors. Upon returning to the majors, Severino was relegated to bullpen duty, where he shined in the late innings.

The Yankees organization intended for Severino's role in the bullpen to be short lived, as he competed for a rotation spot in spring training. Severino has not slowed down since he earned one of the two available rotation spots following an impressive spring performance. The 23-year old has in many ways established himself as the ace of the rotation. The most reliable starter thus far this season, Severino is making a strong case for the first All-Star selection of his career. Following his dominance of Baltimore yesterday, Severino is now 5-2 with a 2.75 ERA in 12 starts, compiling 84 strikeouts in 75.1 innings.

There's no reason to think Severino will slow down any time soon. He could very well become a mainstay in the Yankees rotation for years to come. Considering the Yankees haven't developed an above average starting pitcher since Andy Pettitte, it will be exciting to watch a home grown stud lead the rotation through the pennant race that 2017 is shaping up to be. 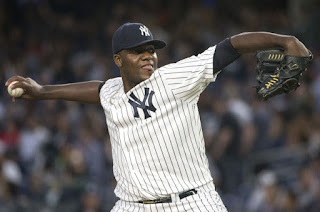 If Severino is the ace, Pineda is a close number two. Since arriving to the Bronx following his impressive 2011 rookie campaign with the Mariners, Pineda has been a common frustration for anyone with a vested interest in the Yankees success. Once he moved past an extensive injury history, Pineda began to become plagued by inconsistencies. In an injury shortened 2014 season, Pineda went 5-5 with a 1.89 ERA in 13 starts. Pineda's 2015 and 2016 seasons can be defined by one word: inconsistency.

The 2017 season has been a completely different story for the formerly embattled right hander. Heading into free agency, Pineda entered the season with a chip on his back. Pineda knew that if he did not perform this season, he would not earn the contract that his kind of stuff warrants. Pineda may not be dominant every time he takes the mound, but he provides the Yankees with quality innings. In years past, on a night Pineda didn't have his best stuff, he would fold and subsequently get lit up by the opposing lineup. Now, Pineda is able to mitigate the damage, and avoid giving up the devastating inning.

Big Mike has also made his own case for an All-Star nod, as he currently sits at 7-3 with a 3.39 ERA in 12 starts. Pineda has struck out 75 and only walked 17 in 71.2 innings. If Pineda keeps this up, he'll earn a hefty contract this offseason, though it may not be from the Bombers. 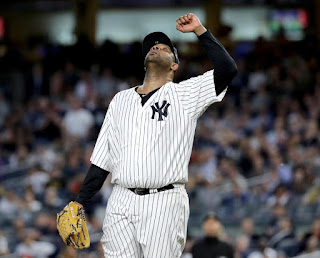 Some may label Pineda as the Yankees' biggest surprise, but it's hard to believe anyone predicated Sabathia would perform as brilliantly as he has thus far. It appears that the big guy has discovered a fountain of youth, and returned to his 2009-2012 self. Ever since the 2013 season, Sabathia has witnessed a steep decline in his stuff and numbers. The Yankees were expecting Sabathia to simply be a number five starter who could eat up innings. Instead, the veteran lefty has become an important stopper in the Yankees rotation. As we witnessed in his eight shut out innings against Boston on Wednesday, Sabathia is dominant following Yankees losses, compiling a 6-0 record when starting after a Yankees defeat.

It may be a long shot, but Sabathia also deserves All-Star consideration. After stringing together a series of excellent starts to begin the season, Sabathia struggled over his next few starts before righting the ship once again. In 12 starts, Sabathia is 7-2 with a 3.66 ERA. Though he struggled to make the adjustment from power pitcher to a pitcher with diminished stuff over the past few seasons, it appears that everything has come together in 2017 for CC.

Sabathia's veteran presence has been essential to the development of the young arms in the rotation. Not only is he performing at a high level, but Sabathia's championship pedigree will take on a new meaning as the Yankees enter the grueling summers months, and hopefully meaningful games in September and October. 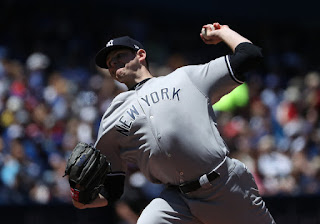 The dark horse candidate to win the fifth starter's job in spring training, Montgomery has been better than the Yankees could have even envisioned. The young lefty has demonstrated an impressive ability to keep the team in games. Not once has Montgomery gotten totally dominated by an opposing lineup. Even when he doesn't have his best stuff, Montgomery is able to labor through innings and depart with the Bombers at the very least within striking distance.

Simply put, Montgomery knows how to pitch. He may not have overpowering stuff, but he has a nice repertoire of pitches that allow him to navigate through opposing lineups. In 11 starts, Montgomery is 4-4 with a 3.55 ERA. The young lefty has some command issues he needs to work on, as he's walked 23 in 63.1 innings, but that critique is pretty much the biggest knock against Montgomery. Once he rectifies this, Montgomery will likely give the Yankees more innings, and continue his development.

The one stain on the Yankees remarkably better than expected rotation has ironically been the guy they expected to be the one reliable arm coming into the season, Masahiro Tanaka. Since this article is designed to highlight the positive aspects of the Yankees rotation, I won't delve too deep into Tanaka's struggles. That being said, he has been horrendous this season, going 5-6 with a 6.55 ERA in 12 starts. Tanaka has given up an alarmingly high 17 home runs in 66 innings.

Due to his contract, it's hard to say that Tanaka's rotation spot will ever be in jeopardy, even though his performance may warrant such a move. If Tanaka can turn it around, and the rest of the rotation stays healthy, this starting staff is as formidable as any. In the event of a Tanaka DL stint, which many Yankees fans would find as a positive development at this point in time, phenom prospect Chance Adams may get the call to the Bronx.


It's amazing to think that heading into the season there were numerous worries revolving around the Yankees rotation. Severino, Pineda, Sabathia, and Montgomery have largely put to rest any concerns regarding their abilities. Tanaka, on the other hand, has been the one dark spot. If the Yankees rotation continues to excel, and I won't even call it surprising anymore because the success has been sustained, this team has the potential to truly be something special.