Which Yankees outfielder should sit on the bench?

By Unknown - June 03, 2017
According to nearly every statistical measure, the New York Yankees have the best outfield in the Major Leagues. Led by the emergence of superstar in the making Aaron Judge in right field, the resurgent Brett Gardner in left field, and the red hot Aaron Hicks in center, the Yankees outfield has shattered expectations. With starting center fielder Jacoby Ellsbury still on the disabled list due to a concussion he suffered on May 24, the Yankees outfield dilemma has been largely able to solve itself. With Ellsbury scheduled to return at some point next week, however, manager Joe Girardi will be tasked with making a tough decision. Which player should ride the bench? Though Ellsbury has performed quite well this season, his numbers don't come close to those of his co-outfielders. The Yankees have an obligation to put the best team possible on the field every night. Therefore, despite his $153 million contract, the Yankees have no choice but to relegate Ellsbury to bench duty for the foreseeable future. 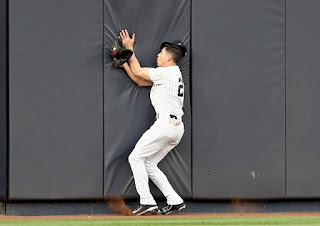 
At this point in time, it's hard to imagine that the Yankees do not regret signing Jacoby Ellsbury to a seven-year, $153 million contract. In fact, it wouldn't be a stretch to classify Ellsbury's albatross of a contract as one of the worst in franchise history. With Judge, Hicks, and Gardner all proving that they deserve starting spots, the Yankees must decide how to handle the overpaid former-Red Sox outfielder. The Bombers also have Clint Frazier, Dustin Fowler, and Blake Rutherford in the minors, all three of whom are highly regarded outfield prospects. It appears that Ellsbury's contract, which runs until 2020, will continue to haunt the Yankees for years to come.

Though Ellsbury has been a disappointment since coming to the Bronx, 2017 is shaping up to be his best season in pinstripes. In 39 games before his injury, Ellsbury was hitting .281 with four home runs and 14 RBIs. These numbers may be respectable, but they pale in comparison to the other three outfielders on the roster.

Aaron Judge, who has been named the American League Rookie of the Month for both April and May, is currently second in the AL in All-Star votes. Not only is it likely that Judge will be the AL's starting right fielder in Miami for this year's All-Star game, but he could also very well find himself as a top MVP candidate if he continues on his current pace. Judge is currently hitting .326 with a Major League leading 18 home runs, 40 RBIs, and a .431 OBP. These numbers are otherworldly. Even as Girardi has instituted platoons in left and center to get Hicks some at bats when Ellsbury was healthy, he didn't remotely contemplate sitting Judge. Such an option is an automatic non-starter. 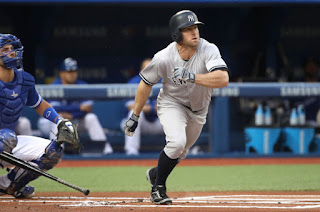 Despite getting off to a horrendous start in April, Gardner quickly turned his season around in the last month or so. In the month of April, Gardner was batting .205 with only two home runs and four RBIs. Gardner went on a tear in May, and there's no reason to believe the calendar flip to June will change his current trajectory. At the time of this article's writing, Gardner is hitting .272 with 11 home runs and 25 RBIs. Interestingly, he's tied with Matt Holliday for the second most homers on the team, behind Judge, of course. The longest tenured Yankee, Gardner is playing the best baseball of his career right now. Though there have been trade talks surrounding the scrappy left fielder for quite some time, the Yankees seem inclined to hold on to him. He has an affordable contract that runs through next season, has been producing, and is well-liked in the clubhouse. Gardner may lose some at bats to Hicks when Ellsbury returns, but this should not be the case.

Aaron Hicks is hands down one of the most compelling stories of 2017. After a dreadful 2016 season, Hicks has completely turned his career around. Acquired by Brian Cashman two offseasons ago for catcher John Ryan Murphy, the 2014 first round draft pick looked lost during his first season in pinstripes. This season, however, Hicks has proven that he's capable of playing every day. In 130 at bats, Hicks is hitting .323 with 8 home runs, 30 RBIs, and an impressive .438 OBP. I'd love to see someone attempt to make a logical argument to keep Hicks on the bench as the fourth outfielder. No such argument exists. Hicks must continue to start, even if it means benching one of the highest paid players on the team. 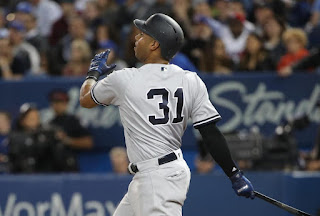 I'm now left to discuss Ellsbury. In one of Brian Cashman's worst moves ever, he decided to hand the oft-injured Ellsbury a long-term and big money contract. This move has surely backfired on the Yankees, as Ellsbury is virtually untradeable, and clogging up an outfield spot. Had it not been for the emergence of Hicks this season, the Ellsbury dilemma would not have surfaced until 2018, when top prospect Clint Frazier is expected to be MLB ready. Instead, the Yankees must make a tough decision. Will they sacrifice production in favor of appeasing the $153 million man? Doing so would constitute absolute foolishness.

The Yankees outfield dilemma isn't necessarily a bad problem to have, but it is an awkward one for Girardi to handle. Having to tell Ellsbury that he will be coming off the bench once he returns from the DL is not a conversation the Yankees manager may want to have, but it's one that must happen. The current combination of Judge, Hicks, and Gardner is working. All three players deserve at the very least All-Star consideration. Statistics do not lie. Right now, Ellsbury is the worst option of the four. As such, the Yankees should not let dollars dictate their decision making. As a first place team, the Yankees have a duty to their fans to field the best lineup on any given night. Achieving this goal means, for the time being, that Ellsbury must sit.

Ellsbury is making progress with his rehab, and is expected back at some point next week. By no means am I saying that the Yankees should ostracize their center fielder, but until either Gardner or Hicks cools off, there's no reason for Ellsbury to be getting the majority of the starts. A baseball season is a fluid situation, and things can change quickly. As of now, however, it is in the best interest of the Yankees to continue starting Hicks in lieu of Ellsbury.