By Unknown - June 07, 2017
CC Sabathia redeemed the Yankees rotation with a strong outing in game two against the Red Sox as the home team won by a final score of 8-0. The bottom of the lineup did all the damage for New York as Didi Gregorius and Chris Carter hit home runs to provide the Yankees with all the offense they needed. The win gives New York a bit of relief in the standings, extending their lead in the division to two games. 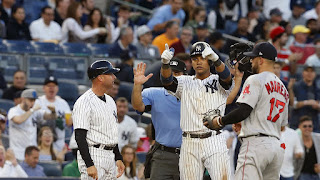 Both Sabathia and Porcello dominated early in the game, dispatching hitters with ease. Porcello did it with an impressive cutter and two-seam fastball that painted the corners and frustrated hitters. Sabathia was effective with off-speed pitches and good command. Through eight innings he allowed just five hits and struck out five batters. All the while dropping his ERA to 3.66 and grabbing his seventh win of the season.

Porcello’s journey hit rough waters in the third inning when Didi Gregorius led off the inning with a solo home run. From there Chase Headley got on base and Chris Carter moved himself and Headley to second and third by forcing one of many Boston Red Sox errors. Despite having two runners in scoring position with no outs, Porcello was able to navigate past Brett Gardner, Aaron Hicks and Aaron Judge to tight-rope walk out of danger. 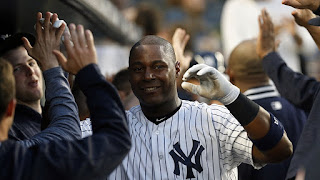 The hole got bigger for the Red Sox one inning later as Chris Carter hit a three-run home run, bringing in Gary Sanchez and Headley to put the Yankees up by four runs. The Red Sox did try to make some noise in the bottom of the top of the fifth as Josh Rutledge hit a triple but they were unable to bring the second baseman home.

The Yankees would add to the lead in the seventh inning when Matt Holliday singled to score Brett Gardner. However, they could have gone ahead sooner when Chris Carter was robbed of a home run by Mookie Betts in the bottom of the sixth inning. Joe Girardi did seem to request a review as a fan touched the ball before it entered Betts’ glove but the umpires refused to review the play, sending the game along. 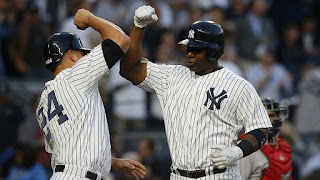 Carter and Gardner would single in two more runs to make the game 8-0 in the bottom of the eighth.

The win sends the Yankees to 33-23 on the season and gives them a chance to take the series against the Red Sox tomorrow night. Another win would give them even more breathing room in the standings before welcoming the Baltimore Orioles to Yankee Stadium for the weekend.