Chad Green is having a remarkable breakthrough season so far for the Yankees. It hasn’t generated as much attention as it should solely because of the other amazing performances other Yankees are putting on display. After being a top flight starter at college baseball powerhouse Louisville, Green found his pitching career floundering between starter and reliever at the next level.  However, this spring he has adapted exceptionally well to everyday life in the bullpen so far. 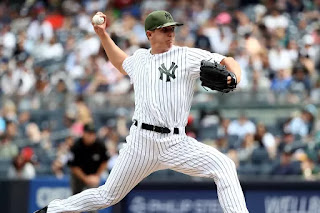 Green has exceeded all expectations through the first half so far by pitching out of the pen to the tune of a 1.86 ERA. Green has also shown his versatility by making the occasional spot start for the Yankees. The numbers that Green have put up go far beyond the impressive ERA.  He’s been consistently showcasing a fastball sitting in the upper 90’s this year. This ferocious heater had directly led to an uptick in strikeouts and missed barrels.  Green has punched out 36 batters in 29 innings of work. Hitters are managing to hit only a measly .147 against him.

Green’s consistent performances have resulted in Joe Girardi’s confidence in him increasing greatly as the season has gone on. With the heavy struggles from the rest of the Yankees bullpen over the last month, Green now looks like the most trusted reliever available not named Aroldis Chapman or Dellin Betances. Specifically, Tyler Clippard’s role out of the bullpen should now be given to Green. His fastball has shown no signs of slowing down and he should be the prime candidate to get the first critical outs of the late innings once the Yankees’ starter needs to be removed.

Chad Green has the potential to save the Yankees from having to give up a valuable prospect in order to make a desperation trade at the deadline. He has only given up 14 hits and two HR’s this year in his 29 IP.  Meaning that if he continues to pound the strike zone, he has the potential to be a huge asset for the Yankees as the race tightens down the stretch with the Red Sox for the AL East crown. Look for Girardi to continue to turn the young righty in big situations in the sixth and seventh innings in order to bridge the gap to the big guns at the back-end of the bullpen.