Jonathan Holder's season is a microcosm of the Yankees bullpen as a whole. Starting off on solid footing and getting progressively worse as the season moved forward, Holder transitioned from a reliable middle relief arm to yet another reliever incapable of protecting a lead. No longer with the Major League club, Holder was optioned to the minors in late June as part of the never ending infamous Scranton Shuttle that the Yankees have employed for the past few years. Sooner rather than later, however, we should expect to see Holder back in the bullpen, hopefully pitching like he did in April and May. 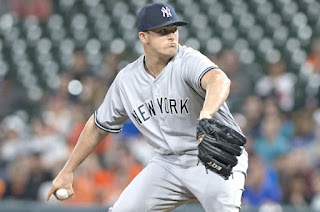 After winning one of two available bullpen spots out of Spring Training, Holder was poised to make the most out of his opportunity. In April and most of May, Holder proved to be an asset out of the bullpen for the Yankees, pitching to a 3.38 and 3.21 ERA in each of those two months, respectively. Holder typically came into close games, and often in high leverage situations. Beginning in late May, and especially during the month of June, Holder began to regress, giving the Yankees cause for concern.

Prior to being sent down to the minors in late June, Holder was 1-1 with a 3.78 ERA and a 1.38 WHIP in 32 appearances, striking out 33 in 31.1 innings of work. Holder had some hiccups in late May, but seemed to have straightened himself out before the disastrous West Coast trip that began the Yankees downward spiral. Though his numbers may appear respectable on the surface, Holder did have trouble when it came to inherited runners.

Following a string of disappointing appearances in late June in which he surrendered five earned runs in four games, the Yankees optioned Holder to Triple-A in favor of Tyler Webb on the 27th of the month. The 24-year old Holder will almost certainly be back in the majors at some point this season. A baseball season is a very fluid situation so it is difficult to predict when that date will be, but it's hard to imagine that it won't come.

When Holder does return to the big league club, he'll hope to reestablish himself as a trusted reliever in the middle of the bullpen. As long as he works on some kinks in the minors, this goal is more than realistic. Needless to say, the Yankees are in desperate need of bullpen help. The Bombers would love to address this issue internally before seeking options on the open market. It's hard to imagine them not giving Holder one more chance.

For two months, Holder was a mainstay in the Yankees bullpen. Coming into high leverage situations and getting the job done more often than not, Holder showed the organization that he is capable of performing at a high level in the Majors. On the other hand, there is still some work to be done, particularly when it comes to mitigating damage. When Holder was pitching well, he was almost unstoppable. On the other side of that spectrum, when Holder struggled, he really struggled. It wouldn't be too far fetched to compare the young reliever's main issues to those of starter Michael Pineda, though the latter may unfortunately never make the necessary adjustments.