Matt Holliday has proven to be quite a valuable off season addition for the Yankees so far in 2017. Holliday has displayed that even at age 37, he is still more than capable of driving in runs at a high rate.  His contribution to the team extends beyond his on-field production in pinstripes though. Holliday has provided an important veteran presence to an extremely young clubhouse. By all accounts, he has really helped rookie sensation Aaron Judge smooth his transition into the spotlight of stardom. Holliday’s leadership is a big factor as to why the Yankees were able to get off to such a hot start in the early months despite the overwhelming youth on the roster. 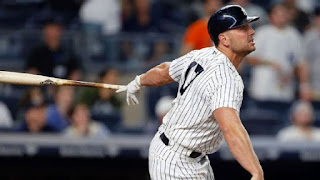 Holliday’s 47 RBI this season in only 68 games played highlight the fact that he has been clutch for the Yankees when given the chance to put runs on the board. His average is sitting at .262, but he boasts an OBP of .366. This number is indicative of his good eye at the plate, making him a tough out every night for opposing pitchers. Holliday was even able to step in admirably at first base for a few games when the Yankees needed to keep his bat in the lineup.  Unfortunately, Holliday has been sidelined since the last week of June with a viral infection. This setback has been part of a rash of injuries for the Yanks that has set their lineup production back of late. The good news is the All-Star break is quickly approaching.

Assuming that Holliday returns to the lineup as the everyday DH after the break, he will once again be able to provide some much needed protection for Aaron Judge. Despite obviously not being the same caliber of player as Judge at this stage in his career, Holliday’s reputation as a potent RBI man around the league will make pitchers think twice about constantly pitching around Judge. This is an extremely valuable asset that the veteran brings to the middle of the Yankees lineup; helping to make them such a productive offense thus far. If he remains healthy, look for Holliday to once again eclipse the 100 RBI mark by season’s end.

Look for Matt Holliday and his powerful bat to return to the heart of the Yankees order in time for the 2nd half of the season with a bang. This season is a perfect marriage between a veteran at the latter stage of his career still looking to compete in the postseason and an organization looking to find its way back to the top. Holliday is no doubt suffering as he watches the Yanks falter towards the break while being unable to help stop the bleeding. If the team is able to position itself for a postseason run, Holliday will undoubtedly be looking to leave his mark once again on the game’s biggest stage.