By Anthony Merced - July 20, 2017
The Yankees will travel out west to play the Seattle Mariners for four games, still looking for consistency game-to-game and a string of positive results. The Mariners themselves have seen a bit of a resurgence, going 7-3 in their last ten games and pushing to make a run at one of the Wild Card playoff positions in September. This series also proves to be a chance for new players such as Todd Frazier and David Robertson to make themselves at home on the road with their teammates. 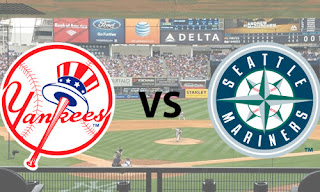 King Felix isn't quite as dreaded as he was years ago, especially after coming off the 60-day DL, but he is still a force to be reckoned with in the American League. Don't let his season ERA fool you. Over his last five games the Mariners ace as gone 3-1 with a 3.72 ERA. By no means lights-out, but given his 10-6 record against the Yankees, he may be looking to gain even more confidence against a team he is comfortable pitching against.

For the Yankees, they will send Luis Severino to the mound. His last start was particularly impressive, pitching seven innings and allowing just one run. He did not get the decision as the game ended up going 16 innings. The month started out slippery for the right-hander. After giving up six earned runs against the Astros, he has calmed down and regained his form. He will need that to out-duel one of the more dominant pitchers in the game over the past few seasons.
GAME TWO (Friday, June 21 | First Pitch: 10:10 PM ET)
CC Sabathia (8-3, 3.54 ERA) vs. Andrew Moore (1-1, 5.25 ERA)

The Yankees will send one of their top pitchers to the mound on Friday in CC Sabathia. The team's downward trend can be linked almost directly to his injury woes earlier in the season. Now with him back in the rotation manager Joe Girardi is hoping for consistency from the starting rotation. The big guy provided that in his last start against the Red Sox where he pitched six innings of scoreless baseball. The Mariners' lineup is not what he faced in Boston so expectations are that he should be able to duplicate that performance.

Up against him will be Andrew Moore. Moore has been in the majors since June and has given the Mariners innings but has been ineffective in the process. His last start was his worst effort against the White Sox where he surrendered six runs in three innings. This is the game where Yankee bats should feel most comfortable since Moore has been prone to surrendering home runs.

Who will the Yankees see on the mound on Saturday is the question when the send Masahiro Tanaka out for the third game. Tanaka has been hot and cold all season. Just when it appeared as if he had gotten himself together, he was taken for five runs against the Brewers just two weeks ago. Against the Red Sox he into the eighth inning, surrendering only three runs. The Yankees will need solid innings from Tanaka and less chaos.

Ariel Miranda will be the starter for the Mariners and hasn't been particularly strong this month. In two starts he has given up 11 runs and pitched just over 10 innings. Miranda has also surrendered multiple home runs in five of his last six games. Yankee bats should be effective against him, especially if they get to him early.

Both the Yankees and Mariners are sending out their unknowns for Sunday's closing game. Luis Cessa will be up for the Yankees, making only his second start this month. Cessa was effective in relief against the Brewers and Blue Jays, pitching a combined 6.2 innings with no runs. His start against Minnesota was a different story, surrendering three runs in less than four innings of work. The Yankees will need to provide offense for Cessa to remain comfortable and potentially give them a strong outing.

Sam Gaviglio will be opposing Cessa. Gaviglio had a strong June but has slipped in July with three consecutive losses. His ERA has also ballooned to nearly five after giving up five runs against Houston on Tuesday. Gaviglio does have the ability to shut down teams, as he showed in June. However, whether or not he can regain his confidence remains to be seen.

Todd Frazier:
The newest Yankee made his first appearance with the team against the Minnesota Twins. He struck out at an inopportune time, but the excitement remains about what he can bring to the team. There is a bit of worry as to where his power has gone. Despite having 16 home runs this season, he has only hit one in the last 15 games. His average has also sunk to .206. Perhaps he has yet to get acquainted with the new lineup but there are expectations that he can provide some additional power for the team in key spots.

Clint Frazier:
The rookie Clint Frazier continues to impress with another two-hit performance against Minnesota. The young left-fielder is batting .298 since joining the team on July 1. His bat has been a welcome addition to the lineup and his ability to give the other outfielders a few nights off is much appreciated.

Robinson Cano:
It is not a controversial statement to say that Robinson Cano has not been what the Seattle Mariners had hoped for. The borderline MVP candidate that seemed unstoppable on the Yankees has been solid for Seattle but not the world-beater they may have been expecting. This season he is batting .266 with 18 home runs.