The time has come for the Yankees to trade Brett Gardner

By Unknown - July 15, 2017
The longest tenured Yankee, Brett Gardner has been donning pinstripes since the 2008 season. Gardner has been a frustratingly streaky player at times, but never once have Yankees fans questioned his heart or desire to win. That being said, Gardner's time in the Bronx should come to an end this July. With a plethora of young outfield talent, and the albatross of a contract that is Jacoby Ellsbury, there is simply no room for Gardner on this team anymore. With a team-friendly contract that runs through the 2018 season, Gardner will certainly be an attractive option for a number of teams looking for outfield help. The recently called up top prospect Clint Frazier appears ready to take the reigns in left field. As the deadline looms closer, Brian Cashman should diligently shop Gardner, and jump on the best deal possible. 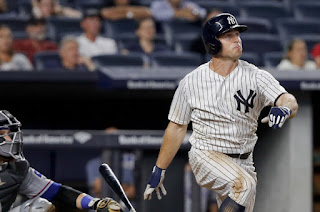 
Dating back to 2009, Gardner has been a mainstay in the Yankees lineup. Originally called up as a speedster/fourth outfielder off the bench, Gardner eventually established himself as a starter showing he's much more than a guy who is capable of just running the bases. There's a reason Gardner has been with the Yankees for so long. He fits in very well with the Yankees culture. Not to mention, Gardner is an above average outfielder, having won the 2016 Gold Glove in left field. Gardy shows up to work every day, and leaves it all on the field. For this, he deserves commendation. Recently, Gardner has even taken on an important leadership role in the clubhouse, helping mentor some of the younger players making their way into the big leagues.

As much as I've complimented Gardner in this article, I must note that he is a deeply flawed player. While the 33-year old has exhibited an ability to get on base, hit for power at times, and put together quality at-bats, he is alarmingly streaky. For whatever reason, Gardner's on and off switch is extremely sensitive. He's shown a tendency to go on offensive tears for a few weeks, but respond with another few weeks of a slump. There's no rhyme or reason to it, but that's just the player Gardner is.

The Yankees are in the process of a transition to becoming a much younger team. Fortunately, the Bombers have a plethora of talent in the outfield. Home Run Derby Champion and probable Rookie of the Year Aaron Judge has already established himself as the right fielder for years to come. Prior to landing on the DL last month, Aaron Hicks appeared to be on the way to having a break out year. Clint Frazier, the organization's number two prospect, has impressed during his short stint thus far in the Majors, which has been highlighted by a huge walk off home run against the Brewers last weekend. These three outfielders, in conjunction with the versatile Tyler Wade, recently injured Dustin Fowler, and even as far down on the depth chart as Blake Rutherford, constitute a huge strength for the Bombers. 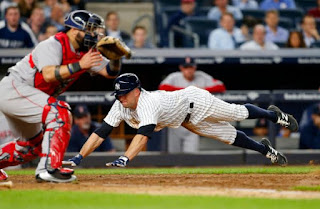 Having four outfielders-- Judge, Hicks, Frazier, and Gardner-- on the roster would be ideal. Unfortunately, there is one roadblock to this optimal situation: Jacoby Ellsbury. Following the 2013 season, Brian Cashman foolishly and recklessly handed Ellsbury a seven-year, $153 million contract. This albatross of a deal will be almost impossible for the Yankees to unload. Gardner, on the other hand, is owed only $11.5 million next season. Considering Gardner and Ellsbury are similar players, there's only room for one of them on the team. I will clarify that Gardner is the better and healthier option at this point in time. As much as I'd like the Yankees to keep Gardner, they have no choice but to move on from their longest-tenured player. It simply must be done.

I've already made it known that I believe the Yankees should not be buyers at the trade deadline. That being said, trading Gardner would not signal a waving of the white flag. Rather, it would simply be an indication that the Yankees believe Frazier is ready to take the reigns as the starting left fielder, something Yankees fans should be exhilarated about. Gardner is one of the few chips the Yankees have that can actually bring something back in return. Teams such as the Diamondbacks, Brewers, Nationals, Pirates, and Twins are in need of outfield help. If the Yankees can flip Gardner for a bullpen arm, backend of the rotation starter, or even prospect depth, it will be a deal worth making.

Brett Gardner has been a very good Yankee. He has not been great, but he's done enough to earn the respect of the Bronx faithful. At the very least, he'll most definitely be invited for many Old Timers' Days after retirement. Sadly for Gardner, the Yankees are ready to move on. The abundance of young outfield talent cannot be ignored. Frazier is ready to start and the Yankees must oblige. Hicks has also shown he is capable of starting. I'm sure the Yankees strongly regret handing Ellsbury that long-term deal of his, but there's no turning back the clock. Whether you think the Yankees should be buyers or sellers at the deadline is irrelevant. Trading Gardner is compatible with both of these goals.

Thanks for everything, Brett! However, your time in the Bronx should come to an end pretty soon-- and by soon I mean this month.