By Unknown - July 13, 2017
Should Brian Cashman make a move at the trade deadline to further the Yankees' chances of making a run in October? If you asked me this question one month ago, the answer would have been a resounding YES. However, after watching the Yankees falter for the last month or so, the organization should be hesitant to jeopardize the future for 2017. Let's be clear-- the Yankees are not winning the World Series this year. That is painfully apparent. Trading away resources to further that unreachable goal would be futile at this point. As a matter of fact, the Yankees should, but probably won't, sell off assets, like Michael Pineda and Brett Gardner, to pave the way for even more Baby Bombers. Fellow Yankees fans, the future is bright, but it has not yet arrived. 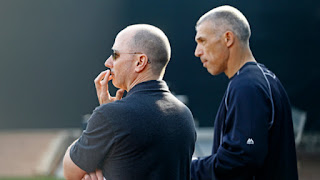 
Investopedia defines a market correction as, "a reverse movement, usually negative, of at least 10% in a stock, bond, or index to adjust for an overvaluation." The Yankees are undergoing one hell of a market correction, and management must take note of this before investing in a product destined to fail.

The Yankees' rebuild has went as successfully as just about anyone could have predicted. Homegrown studs like Aaron Judge, Gary Sanchez, Luis Severino, and Jordan Montgomery have had a substantial impact on the big league club this season. Clint Frazier, Tyler Wade, and Miguel Andujar have also gotten their feet wet in the Majors. Had it not been for injury, top prospect Gleyber Torres more than likely would have gotten his shot to shine as well. The point of this ramble is that the Yankees are in a good spot right now. By 2019, or maybe even 2018, this team will have officially arrived. At this moment in 2017, however, the Yanks are still a little while away.

Prior to a disastrous West Coast road trip in June, everything was going right for this surprisingly exciting Bombers squad. The offense was performing at a high level, the starters (with the notable exception of Masahiro Tanaka) were providing distance, and the relievers were getting big outs. That all changed when injury struck. Over the next couple of weeks, CC Sabathia, Starlin Castro, Adam Warren, Aaron Hicks, and Matt Holliday would end up on the DL. The results were catastrophic, as the wheels have fallen out from under the Yankees feet.

The bullpen, led by star relievers Dellin Betances and Aroldis Chapman, has devolved into a state of medicority. With the exceptions of Warren and Chad Green, it's hard to trust anyone in the bullpen now. Oh, and did I mention Tyler Clippard has an ERA over five? The offense has continued to perform at a high level, but with starters unable to provide distance and consistency, too many narrow leads have been handed off to the bullpen to inevitably blow. At this point, the Yankees bullpen has blown SEVENTEEN saves. For the whole 2016 season, that number was sixteen.

Now, I digress and move on to the purpose of this article. The Yankees should stand pat at the deadline and not invest in improving this team. In fact, they should sell, to the extent that they can. The Yankees' recent collapse has provided a full picture of what the team really is. This is a squad that overachieved for two months, and is now coming back down to Earth. 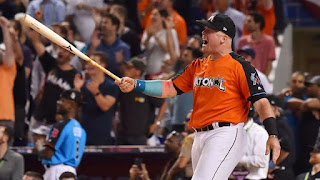 Over the next week or two, we here at the BBB will be profiling potential moves the Yankees can make to upgrade the infield, outfield, starting rotation, and bullpen. While we will do our best to provide you with an accurate overview of the market, I must make my personal opinion known. Any move the Yankees may make will not put them over the top and make this a championship contender. If we're accepting this premise as true, which any reasonable human being should, then it would be irrational for the Yankees to be buyers at the deadline. If you're going to go all in, it should be for the ultimate prize, which is a championship, not a consolation victory.

Simply put, this Yankees team is too deeply flawed. Contrary to what many of us thought when watching the Bombers play early on, there are many holes to be filled. The Yankees certainly have the internal resources to pull in a big name, but that will come at a hefty price. A price that Yankees fans should be unwilling to pay. With the exception of Greg Bird, the Baby Bombers have not disappointed this season. Now, the Yankees must continue to provide them with room to grow. This is why it is of the utmost importance that the Yankees trade veterans such as Chase Headley, Brett Gardner, and Michael Pineda, all three of whom are taking playing time away from the youngsters.

Out of these three, Gardner is likely to bring back the most. The Yankees already have Frazier, who is seemingly ready to take on a permanent role in the Bronx, to fill Gardner's shoes. Aaron Hicks, who got off to a tremendous start to the season, is working his way back from a DL stint. In a perfect world, the Yankees would like to trade away Jacoby Ellsbury and his albatross of a contract, but we know that won't happen any time soon. 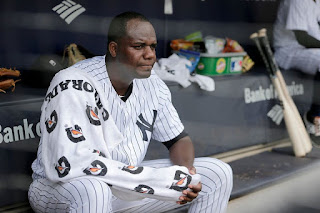 Michael Pineda has returned to his erratic ways, therefore reducing his trade value. He is still a power pitcher with lethal stuff heading into a walk year, so the demand will certainly exist. Trading Pineda will enable the Yankees to finally call up minor league phenom Chance Adams, whose Triple-A performance more than warrants a big league call up. It will be hard to find a taker for Headley, but if the Yankees ate the salary, I'm sure someone may be willing to take a flier on the embattled third baseman. Dumping these three deadweight players, and replacing them with Baby Bombers is the correct course of action.

Sure, the Yankees are in desperate need of help at first base, the bullpen, and arguably the starting rotation. But, dealing for the likes of Justin Bour, Pat Neshak, Brad Hand, Jose Quintana, or Sonny Gray would not be a wise move. Rather, since it's apparent this team is sinking and has no shot at winning a championship, the ultimate goal every sports organization should hold, it's time to sell off the deadweight veterans and move even further into the youth movement. Gardner, Pineda, and Headley will not bring back the return that Andrew Miller, Aroldis Chapman, and Carlos Beltran did last season, but they'll bring back something (with the exception of maybe Headley).

It's obvious that 2017 will not be the Yankees year. Let's not waste future assets on either big name trade targets, or even acquire incremental improvements that won't do much to improve the team's chances at winning a championship. This year was supposed to be a transition year. As the Yankees performance in the first half has indicated (they finished at 45-41, and 3.5 games out of a division they were once poised to run away with), they are a slightly above average team. This team will be in the thick of the Wild Card race, but that's about it. It's time for Brian Cashman to act accordingly.