Yankees unable to get the big hit, drop series finale 5-3 to Rays

By Unknown - July 30, 2017
Hoping to finish off a four game sweep against the third place Rays, the Yankees sent Jordan Montgomery to the mound to oppose Jacob Faria. Montgomery struggled from the get go, as he was unable to finish the third inning. The Yankees offense was equally as frustrating, repeatedly blowing scoring opportunities. The Bombers went 1-11 with runners in scoring position, leaving a whopping 10 runners on base. Unable to capitalize with runners in scoring position, the Yankees had their six game winning streak snapped in this 5-3 defeat. 
The Rays jumped on Montgomery from the very start of this game. In the top of the first, Trevor Plouffe drove in Steven Souza Jr. with two outs to give the Rays an early 1-0 lead. That lead was short lived, however, as the Yankees responded in the bottom of the second. With Chase Headley on second and two outs, Ronald Torreyes lined a home run narrowly over the wall in left field, putting the Yankees up 2-1.

Things fell apart for Montgomery in the third inning. After loading the bases with one out, Montgomery battled back to strike out Plouffe. For a moment, it appeared that the young lefty was going to work his way out of the jam. Corey Dickerson's single to center crushed those dreams, as two runs scored and the Rays retook the lead. The next batter, Wilson Ramos, also singled to center, driving in Lucas Duda. Montgomery departed with the Yankees trailing 4-2. Luis Cessa would come on to relieve Montgomery and end the inning. 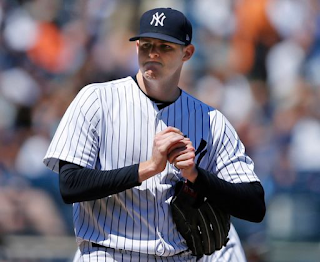 In the bottom of the fourth, Torreyes struck yet again with an RBI double, which drove in Todd Frazier, bringing the Yankees within one. With Aaron Judge set to come up with runners on second and third with nobody out, the Yankees appeared to be set to do some damage against reliever Sergio Romo. Unfortunately for the Bombers, Judge's struggles continued. His trend of swinging at pitches outside of the zone has brought about a disappointing slump for the young slugger. The Rays relievers then retired Matt Holliday and Didi Gregorius, without allowing a run.

Things continued to go Brett Gardner's way in the top of the sixth. Tim Beckham attempted to tag from first to second on a fly ball to middle centerfield, but the veteran gunned down the Rays second baseman, ending whatever hopes of a rally Tampa Bay planned on putting together that inning.

After Todd Frazier walked with one out, Torreyes hit what initially looked to be a double play ball, but an errant throw by Adeiny Hechavarria enabled Frazier to move to third, setting the Yankees up with runners on the corners and nobody out. Austin Romine was then hit by a pitch to load the bases. The Yankees would not score. 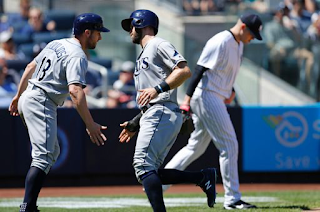 A combination of Chasen Shreve and Chad Green were able to work their way out of a second and third no out situation, which turned into bases loaded with one out, in the top of the seventh. On a full count, Green struck out the ever emotional Logan Morrison l to escape trouble. The Rays would scored again in the eighth, however, on Souza's RBI double, which drove in pinch hitter Mallex Smith, extending their lead to 5-3.

The Yankees attempted to make some noise in the top of the ninth with runners on first and second and one out. Judge popped out to first and Holliday grounded out.

The Yankees will look to get back to their recent winning ways next week as they welcome the Detroit Tigers to the Bronx for a three game series before embarking on a road trip to Cleveland and Toronto.