Aroldis Chapman should be removed from the closer's role

By Unknown - August 15, 2017
DISCLAIMER: This article was written prior to any official announcements regarding the health of Aroldis Chapman, or news of any potential DL stint.

Following Aroldis Chapman's most recent hiccup against the Red Sox, I did not want to write an impulsive article calling for his removal from the closer's role. After tonight's near loss to the Mets, I'm ready to make that declaration. Prior to the start of the 2017 season, the Yankees made Chapman the highest paid reliever in baseball history. As of now, in mid-August, Chapman is the fifth best reliever on the team. This is unacceptable for a closer, a position that requires pitching in high leverage situations. Chapman's ego is irrelevant. He is not getting the job done, so he should not be allowed to continue losing games for the Bombers in the midst of a contentious playoff race. 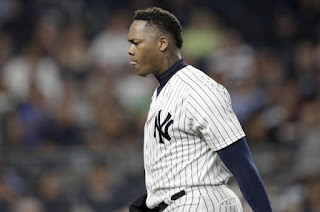 Heading into the season, the bullpen was the Yankees one glaring strength. After seeing this strategy implode during most of June and early July, the Yankees ensured the bullpen would once again be the bright spot that it was to start off the season. The additions of David Robertson and Tommy Kahnle, along with the equally important subtraction of Tyler Clippard, sured up what had been a strength early on. While Dellin Betances appears to have moved past his mid season struggles, Chapman has not.

Let's be clear, at this point in time, Chapman is the SIXTH best reliever on the team. Dellin Betances, David Robertson, Tommy Kahnle, Chad Green, and Adam Warren are each more trust worthy than the highest paid reliever in baseball history. This is a fact. Even the most ardent Chapman apologists cannot deny this reality.

The Yankees are in the midst of a pennant race. Every game counts. While the division is still within reach, the Bombers are even fighting to retain hold of a wild card spot. Do we really want an erratic pitcher to determine this team's fate simply because the Yankees gave him big money this offseason, and Joe Girardi is afraid of offending his temperamental closer?

This past Sunday against the Red Sox, the Yankees were on track to win for the third time this season in a game that Chris Sale pitched. Starter Jordan Montgomery and the Yankees offense did all they could to put the team in a position to win against the probable AL Cy Young Award winner. After some situational hitting by the offense, the Bombers entered the ninth up 3-2, on the verge of trimming the Red Sox division lead to 2.5 games. However, this was not meant to be. Rookie Rafael Devers took Chapman's fastball deep to left center to tie the game. Chapman's erraticism put the Yankees in an instant hole in the tenth inning leading to another loss. Had it not been for an impressive throw by Aaron Hicks, and some incredibly stupid base running by Eduardo Nunez, Chapman likely would have blown Friday's victory against the Sox as well.

For brevity, I will not cite every loss that Chapman has been responsible for this season, but a quick visit to ESPN.com can provide that clarity.

After being handed a 5-2 lead in the top of the ninth against the crosstown rival Mets on Tuesday, Chapman surrendered a two-run homer, bringing the team from Queens within one run of what should have been an easy, feel good victory for Sonny Gray and the Yankees. Instead, he turned it into yet another nail biter.

Chapman has only blown four saves this year, but that low number can easily be attributed to his DL stint and overall lack of use for substantial portions of the season. Prior to his recent near blown save against the Mets, Chapman had an ERA of 3.48 in 33.2 innings, while allowing 28 hits and 16 walks. While these numbers are nowhere near horrendous for a middle reliever, much more is expected out of a closer, particularly the highest paid one in Major League Baseball.

Aroldis Chapman has showed us no reason to believe in him for the foreseeable future. The Yankees must immediately turn to an old friend, David Robertson, to handle the closer's duties. Robertson closed for the Yankees in 2014, and fulfilled the same responsibilities with the White Sox prior to his trade back to the Bronx. A combination of Robertson and Betances is the best thing for the Yankees at the moment when it comes to closing out games.

Since Chapman was signed to a five-year deal, the Yankees are in fact stuck with him. I'm not saying that Chapman should be removed from the closer's role permanently, but at this point in time it must be done. Chapman is a liability. The Yankees simply cannot afford to keep throwing away games. Shame on Joe Girardi if he fails to realize this before it's too late.