By Andrew Natalizio - August 01, 2017
The thrill of Major League Baseball's non-waiver Trade Deadline has come and gone and the Yankees have added two new faces since our last fantasy baseball preview.  In this week's edition, I'll once again break down which players are must starts and which players can be left on the bench.  There are also some pending updates to the Yankees roster in the next seven to ten days, so be sure to jump on available players early or update your rosters ahead of the return of some big names. 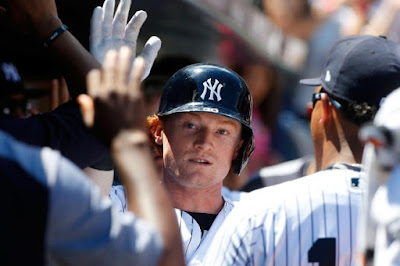 The Yankees finish up their nine game homestand with two more against Detroit before hitting the road for seven – the first four which will be against the defending American League champs, the Cleveland Indians and old buddy Andrew Miller.

The starting rotation of the Detroit Tigers is more or less an unmitigated disaster and you should expect the Yankee bats to stay hot against struggling Anibal Sanchez and Jordan Zimmerman.  For the Yankees tonight, CC Sabathia will look to improve upon a less-than-stellar outing last Thursday against Tampa Bay and Masahiro Tanaka hopes to back up his absolute gem on Friday night as he toes the rubber in the series finale Thursday afternoon.

The starters for the Cleveland series have not yet been announced by either squad, but you should fully expect to see both Sonny Gray and Jaime Garcia make their Yankees debuts against the Indians, likely Thursday and Friday.  The final two games are likely to be started by Luis Severino and CC Sabathia.

Players to start/add:
Clint Frazier
Red Thunder has been on an absolute tear over his last 18 games.  Dating back to July 8th against Milwaukee, Frazier is hitting .288/.316/.534 with five doubles, two triples, three home runs and 15 runs batted in.  He has been the perfect number two hitter behind Brett Gardner and continues to produce.

Didi Gregorius
How can anyone leave Sir Didi on the bench at this point in the season the way he has been hitting?  Didi recently had a ten game hitting streak snapped, but is still hitting a robust .338/.357/.646 since the All Star Break with six home runs and a ridiculous 1.003 OPS.  For leagues that count errors. Didi certainly won't hurt you there as he has tallied just four errors the entire season. 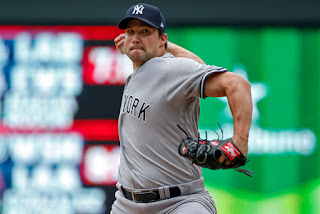 AP Photo/Bruce Kluckhohn
Tommy Kahnle
It's no secret that I happen to be a huge Tommy Kahnle fan, but if you are in need of a middle reliever who can rack up the strikeouts and drive down your team ERA in category leagues, this is your guy.  Since being acquired two weeks ago, Kahnle has thrown 6.1 innings in which he has struck out 11 and walked none.  He allowed his first Yankees earned run last night, but his Yankees ERA is still at 1.42.  Middle relievers aren't often valued in fantasy lineups, but if you give a guy like Kahnle a shot, you surely won't be disappointed.

Starlin Castro & Aaron Hicks
If either guy is available in your league, go out and get them right now.  Both are due back within the next two weeks or so and provide an immediate jolt to your fantasy lineup assuming they can recapture their first half form.  If you are lucky enough to have them stashed on your DL, be ready to activate them once they return to the 25-man roster.

Jordan Montgomery
Monty has struggled of late (1-2, 6.52 ERA, 1.44 WHIP since the break), and with the recent acquisitions of Garcia and Gray, it appears Montgomery is headed to the bullpen.  If you feel like stashing him on your bench for a few weeks, he's worth holding onto in the event he gets another shot in the rotation, but he's a safe drop if the Yankees prefer Montgomery stay stretched out and option him to AAA. 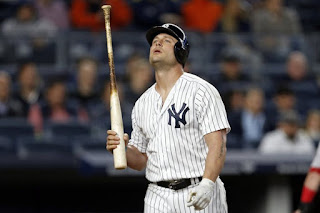 Matt Holliday
Holliday has been absolutely dreadful in the second half of the season returning from his illness in early July.  His one big home run against Craig Kimbrel aside, Holliday has done little to nothing, yet continues to hit in the middle of the Yankees lineup.  This past week saw Holliday slash .160/.192/.160 with no extra base hits and just two runs batted in. He should be stashed on the bench or dropped until he shows signs of improvement.

Masahiro Tanaka
What?! How can you tell me a guy coming off 5.2 perfect innings, ultimately pitching eight innings of one-run ball with a career high 14 strikeouts should be benched? The answer: the Yankees' Wednesday tilt with the Tigers has a 1:00 PM start time.   In six starts in day games this season, Tanaka is an atrocious 0-5 with an unsightly 14.81 ERA.  He has also allowed 14 of his 27 home runs over these six games, or roughly two per start.  Tanaka will also be pitching on normal four days of rest which has been an issue for him this season.  Of course, he could proves all these stats moot and pitch another gem, but I'm not banking on it.

Sonny Gray and Jaime Garcia
If you're anything like me, you're incredibly excited to see Gray (and to a less extent, Garcia) make their Yankees debuts.  Gray cost the Yankees three premium prospects, but he was the missing link to this team being a contender versus a pretender.  With Gray at the front end of this rotation, the Yankees are now serious threats to the Cleveland Indians and Houston Astros. Garcia adds another veteran lefty presence to the rotation and his ground-ball heavy pitching style should play very well in Yankee Stadium.

Aaron Hicks
Hicks is expected back in pinstripes soon as he is currently on rehab assignment.  Hicks' return creates a logjam in the Yankees' outfield with Brett Gardner, Jacoby Ellsbury, Frazier and Aaron Judge already in place, but the Yankees will find a way to get Hicks at bats if he can produce at the level he was prior to this oblique strain in June.

Aroldis Chapman
I'm just going to come out and say it: The Cuban Missile is back.  After a rough stretch sandwiched around his shoulder injury earlier in the year, Chapman has finally appeared to regain his form.  No longer is he just throwing, he's legitimately pitching – effectively using his slider more often while also lighting up the radar gun (he was able to hit 104 over the weekend for what feels like the first time in forever).  Over Chapman's last five appearances, he has pitched to a clean 0.00 ERA while racking up three saves and two wins.  He has struck out seven in 5.2 innings pitched and allowed just two hits while walking none. Any hesitation you might have had about starting Chapman in recent weeks should be all but gone. He is once again a top tier fantasy closer.