By Andrew Natalizio - August 09, 2017
The Yankees looked to rebound from yet another dismal loss on Wednesday night as they sent Masahiro Tanaka to the mound against journeyman Toronto right hander Nick Tepesch.  The Yankees' familiar RISP failures plagued them right from the start in this one but the bats ultimately woke up from last night's slumber as the Yankees poured it on late for an 11-5 win over the Blue Jays in a game highlighted by Todd Frazier and Garrett Cooper's big nights at the plate.

The Yankees came into this game with one of the worst offenses with runners in scoring position and they went 0-for-3 in the first inning following a leadoff double from Brett Gardner. Chase Headley, Didi Gregorius and Aaron Judge were all able to put the ball in play, but weren't able to get Gardner home without the benefit of a hit.

After a strong one-two-three first inning from Tanaka, the Yankees got on the board early via back-to-back home runs from Gary Sanchez and Todd Frazier.  Toronto would get one run back in the bottom of the second after Tanaka walked Steve Pearce and Kevin Pillar hit a double to set up second and third with no outs.  Unlike New York, Toronto was able to manufacture a run on an out after Norichika Aoki grounded out, but Tanaka was able to limit any further damage.

The Yankees recaptured their two-run lead in the third after Gregorius took Tepesch deep, however, in the bottom half of the inning, Tanaka once again worked himself into trouble and, with the bases loaded and just one man out, Pearce delivered a sac fly to cut the Yankees' lead to 3-2.  Pillar would pop out to eliminate further damage, but already Tanaka was 0-for-2 in shutdown innings.  The Yankees offense finally looked to have a pulse, but the so-called ace of the staff looked off.

After the Yankees and Blue Jays traded zeroes in the fourth, the Yankees once again put themselves in position to score with runners on second and third with only one out. Toronto manager John Gibbons pulled Tepesch in favor of Leonel Campos to face Gary Sanchez.  Sanchez got himself into an unfavorable 0-2 count right away and eventually struck out.  Todd Frazier was up next and he was able to flip the script by coming through with a huge two-run double to right-center field, giving the Yankees a 5-2 lead. Jacoby Ellsbury would follow with a frozen rope into the same right-center field gap, scoring Frazier, and the lead was up to 6-2.

Despite the four-run lead, this game was far from over.  The Yankees hoped Tanaka would settle down and give the team some length, but it was just not to be on this night.  Tanaka would begin the bottom of the fifth by issuing a solo home run to Jose Bautista and then walking Josh Donaldson on four pitches.  Just like that his night was over.  Chad Green was called upon in relief, and as he has done so often this season out of the bullpen, Green was able to restore order by striking out the side in dominating fashion.

The Yankees went down quietly in the top of the sixth, but the pesky Blue Jays would not go away tonight. Toronto staged yet another rally in the bottom of the inning.  Aoki led off the inning with a single and Ryan Goins would add the Jays' fourth run of the ballgame with an RBI double to left which chased Green.  Tommy Kahnle came on in relief and promptly walked the first batter he faced.  Kahnle was able to get Bautista to pop up to Sanchez, but Donaldson ripped an RBI single to center to draw Toronto to within 6-5.  Kahnle would narrowly avoid the complete meltdown by striking out Justin Smoak to end the threat, but the Yankees lead had been reduced to one. 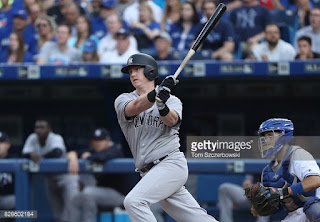 After neither team scored in the seventh, the Yankees would give themselves some breathing room in the eighth after a single from Todd Frazier, a double by Garrett Cooper, and a two-run single up the middle by Ronald Torreyes made the score 8-5 in favor of New York.  After a Gardner walk, the Yankees had a chance to tack on another run, but Torreyes was gunned down at the plate trying to score from second on a single to short center field by Headley.  The Yankees would tack on three more in the top of the ninth to seal the deal.  After starting the night 0-for-5 with runners in scoring position, the Yankees finished 5-for-13.

Dellin Betances and Adam Warren would close things out in the eighth and ninth, respectively, and the Yankees had themselves their third victory in the last four games.  Boston won again, however, in Tampa Bay, so the Yankees weren't able to gain any ground in the division and will look to take the series from the Jays tomorrow, still four games back of the Red Sox who will be coming to town this weekend.