By Unknown - August 11, 2017
On Friday evening, news broke that an ownership group led by former Yankees captain and future Hall of Famer Derek Jeter agreed to a deal to purchase the Miami Marlins from their beleaguered owner Jeffrey Loria. Even during his playing years, Jeter made no secret of his life long desire to own a Major League Baseball team. New York businessman Bruce Sherman will provide most of the funding for the purchase, but Jeter's name recognition alone should bode well for the Marlins organization as it seeks to grow in the Miami market. 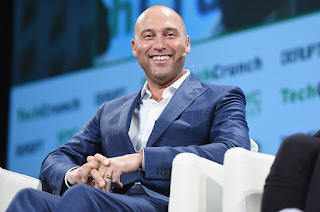 
Derek Jeter's accomplishments on the field speak for themselves. Off the field, however, it was obvious from the moment he retired following the 2014 season that Jeter's post-playing career would not follow the traditional path. The Player's Tribune, a media platform launched by Jeter after his retirement, which allows players to communicate directly with fans, as opposed to using traditional news outlets, has been a tremendous success. Many notable athletes have used the Player's Tribune to announce important news. For example, Kobe Bryant announced his retirement on Jeter's website.

The final number on the sale is reported to be $1.2 billion. The sale will not become official until it receives approval from MLB. Jeter will have a tremendous opportunity to expand the Marlins brand in a city that certainly has a potential fanbase. The Marlins defeated the Yankees in the 2003 World Series, but have not made the playoffs ever since. Such perpetual losing likely explains the organization's failure to establish a dedicated fan base in Miami. Jeter's aura, reputation, and dedication to winning will go a long way in his effort to lead the Marlins back from oblivion.

After joining up with former Florida Governor and GOP presidential candidate Jeb Bush in a previous effort to purchase the Marlins prior to Bush's eventual dropping out, Jeter quickly formed a new ownership group, this time finding success.

One more interesting dynamic is worth noting. The two most recent Yankees captains are now in the Marlins organization, with Jeter as partial owner, and Don Mattingly serving as manager. It will be interesting to keep an eye on the dynamic between Jeter and Mattingly. Would Derek Jeter have it in him to fire Donnie Baseball? That is a question I'm sure neither of them wants to confront.

As Yankees fans, it will be tough to see Jeter involved with another organization. It may very well be the case that his number retirement ceremony at Yankee Stadium earlier in the season is the last time he's seen in the Bronx for quite some time. Even if that is so, we still love you, Derek. One thing is for sure. For many Yankees fans, including myself, the Marlins are now their second favorite baseball team.