Coming off two incredibly frustrating losses to the Detroit Tigers, the Yankees traveled to Cleveland to begin a four game showdown with the defending American League champion Indians.  This night marked the debut of the newest Yankee, right hander Sonny Gray, who was opposed by the ace of the Cleveland staff, Corey Kluber.  Gray was victimized by a ton of bad luck in his first inning and struggled in his final inning, but he looked very strong in his Yankees debut.  Unfortunately, the Yankees ran into the buzz-saw that was a dominant Corey Kluber tonight and never had a chance in this one.  Aside from a Gary Sanchez solo home run in the seventh, the offense was held in check for the third consecutive night and the Yankees fell by a score of 5-1.


The Yankees defense was the opposite of good in the first inning, welcoming Gray to the Yankees by committing three errors behind him before two outs were recorded.  The errors led to two unearned runs and put the Yankees in an early 2-0 hole; one that immediately felt insurmountable based on the way the offense has looked the past week against inferior opponents.

Aside from a walk by Jacoby Ellsbury in the second, the bats once again looked like they were in for a quiet night. Through three innings, Kluber had already racked up five strikeouts, hadn’t yet allowed a hit and had all his stuff working.  On the other end, Sonny Gray rebounded from his unlucky first inning and the score remained 2-0 through three innings of play. Gray at one point retired seven in a row following the Jose Ramirez single before issuing a walk to Michael Brantley.  He would retire Ramirez his next time up and had allowed just one hit and one walk through three. The pitchers duel was on. 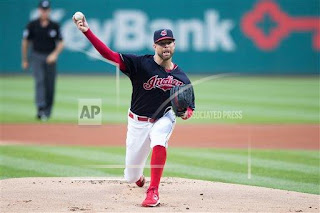 The Yankees would get their first opportunity to score in the top of the fourth after Clint Frazier led off the inning with a double down the right field line, but the Yankees would predictably go 0-3 with runners in scoring position and Frazier was stranded to end the inning. That would, unfortunately enough, be their best chance to score all night.  Having come into yesterday’s game being shut out only once all season, the Yankees immediately looked in jeopardy of being shutout in consecutive games.

Gray and Kluber continued to dominate until the bottom of the sixth inning when, after retiring the first two batters he faced, Sonny Gray allowed his first two earned runs after a walk to Carlos Santana, a single to Brandon Guyer, and then a booming double to Yan Gomes that just missed clearing the fence for a three run home run.  He would retire Erik Gonzalez to end the inning to end the threat, but the damage was done.  Chasen Shreve would relieve Gray in the bottom of the seventh inning. With the Indians now holding a commanding 4-0 lead and with Kluber still in control with a low pitch count, the game was all but over.

Gary Sanchez jolted a little bit of life into the Yankees in the seventh when he connected for his 17th home run of the season - the Yankees’ first run in 17 innings of play - but Kluber would retire Jacoby Ellsbury and Chase Headley afterwards and the Yankees wouldn’t score again the rest of the night.  Francisco Lindor would immediately get that run back for Cleveland, taking Shreve deep, and the score was 5-1 at the end of seven innings of play.

The Yankees would never get to the depleted Cleveland bullpen in this one.  Corey Kluber, who was on from the start, would pitch a complete game gem, dominating the Yankees lineup end to end.  With the loss, the Yankees drop to 57-50, and after Boston’s victory over the White Sox tonight, a full two games out of first place in the AL East.