Let's take it easy on the skipper

By Unknown - August 09, 2017
Yankee fans have heard the same thing for the past few years about their club, “This team has a lot of holes and is not that talented,” then they surprisingly overachieve. This sudden success changes the conversation to “Look how great this team is!” Then they go through a slump, and all the critics come back calling for heads to roll, usually those of manager Joe Girardi and general manager Brian Cashman. This conversation is a yearly tradition for the media and fans, and this year is no different. As for this season, Joe’s contract is up after the year, and with the club possessing one of the top two or three farm systems, Cashman's spot is safe. 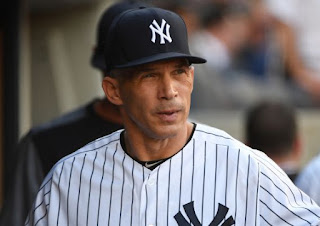 New York surprised many this spring, at one point owning the best record in baseball, and with a young group of sluggers backed by a dominating bullpen, the Bombers looked destined to run away with the division. However, after they pulverized Baltimore in a three game series sweep in the second week of June, the team took a nose dive, not winning a series until they traveled to Seattle in late July. With the strengths of the team turning into weaknesses, the calls for Girardi’s job started to grow louder.

As a lifelong New Yorker and Yankee fan, I understand, everyone wants perfection, and we wanted it yesterday, but everyone needs to slow their roll with this. The talk of this team this offseason was just to compete for a wild card spot and develop the young talent. Look at the holes to start the season: the team had a very flawed rotation, only Tanaka was predicted to be a sure thing, the team had young offensive talent, but was raw and unproven.

Next, look at what the positives were set to be: Gary Sanchez and Greg Bird were supposed to be the young sluggers to lead the team with Starlin Castro, and Didi Gregorius; the 7-8-9 combo of Tyler Clippard, Dellin Betances, and Aroldis Chapman was going to lock down the end of games.

Now let’s see what happened since then: Tanaka was almost unplayable for a lot of the year but has righted the ship, Luis Severino is one of the best pitchers in the MLB, Bird is hurt, Sanchez was injured and is struggling, Aaron Judge was on track for a triple crown, but now is slumping. Aaron Hicks, Jacoby Ellsbury, and Dustin Fowler all got hurt for an extended time, Didi missed the start of the season, Starlin Castro was and is injured, and Chapman was out for a month. Tyler Clippard was so bad fans booed when he came to pitch and cheered when he was traded; there have been over 11 players to play first base, counting two catchers and a pitcher; Chase Headley is the first baseman, and Betances struggled mightily for a month. This list is a lot to take in, but almost none of the preseason prediction matches up to what happened so far this season. 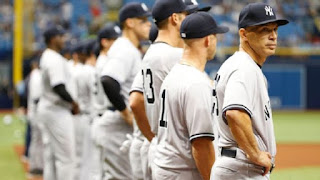 These reasons will cause some to blame Girardi, but when you start to look deeper into the ups and downs of this season, its starts to be clear that the skipper isn’t entirely to blame. This team is very young, and with youth comes uncertainty and inconsistency. The fact that they were able to be that good for that long was a blessing. A good portion of the credit for the turnaround of Judge, Sevy, and Hicks has to go to Joe and his staff, as well as the early success of Ronald Torreyes, Jordan Montgomery, and Clint Frazier. He also helped navigate through the struggles of Chapman and Betances. Most recently his handling of Chase Headley move to first base shows his skills as a manager. He had to deal with a bruised ego and a position change for the struggling Headley, and now he is the second best hitter in the AL post All-Star break behind Jose Altuve. Lastly, we must look at the bullpen. Sometimes Girardi is criticized for his moves and tendency to over manage, but for the most part, it works, with the Yankees routinely having one of the best bullpens in the league.

Let’s say you still think this is Girardi’s fault, and want him fired, what would be the plan? Right now the Yankees are in an advantageous position, possessing a lot of money and a lot of young talent, so picking the right manager is crucial to the success of the club moving forward. Girardi was able to win with the lowest payroll in baseball back in 2006 with the Marlins, winning NL manager of the year, and if they had a competent owner, he would probably still be the manager there.

As good of an opportunity as it is, it's equally as tough, coaching in New York is not easy, and many can't handle the pressure of the Big Apple. Joe has not dipped below 84 wins in his ten years as the Yankees manager and has finished in the top six of AL manager of the year awards in every year as the skipper. Not to mention, he played here from 1996-1999, so he knows what it takes to be a Yankee. He has had some pretty talented teams early on, but that has not been the case for the past three or four years, and he still competed for a playoff spot every year. 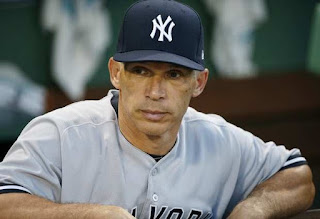 With this resume, almost every team in the MLB would jump at the bit to sign a coach like this, especially the team across town at Citi Field, so who is the replacement? If you just promote within, you concede that nothing was wrong with development, but think the team needs a new leader. Now that would affect the locker room, and does this team look like they need that?

Next choice is to go outside the organization, which usually is some other manager who is fired, which I’ll save you the trouble of looking, it isn’t a great lineup. After that. would be to hire an assistant from another organization, which is risky because you don’t know what you are going to get from that, and do you want an inexperienced manager guiding the future of the franchise? On top of that, if the team fires Joe, they probably clean house, so that means most of the assistant coaches on the staff are gone too, which would most likely be a large detriment to the team as well.

Whenever a hot team starts to cool down, fans and media like to start to point fingers on whose fault it is, and a lot will go to coaches and management. Sometimes it's just a regression to the mean, at times it’s just a slump, and what makes a good franchise is patience. The upper management of the Yankees will indeed observe how Girardi and company handle Sanchez’s current issues, the demotion and promotions of Jordan Montgomery and Clint Frazier, as well as the recovery of Greg Bird and Aaron Hicks as this team chases a playoff spot. The Yankees have historically measured their success by championships, but right now, success would be securing a playoff spot, after that, it is all a bonus.


This situation is reminiscent of another New York head coach in Tom Coughlin of the Football Giants, when barely a year after winning the 2008 Super Bowl, media and fans were calling for his job up until they won the franchise’s fourth Super Bowl. New York is known for fans and media that are passionate and critical, this drives much of the greatness that is evident in their sports franchises, but sometimes patience is the prudent move. The players seem to love Joe, and as long as that stays true and the team keeps competing, the Yankees should keep the longtime veteran skipper in the Bronx.