The Yankees offense was able to stay hot in yet another blowout win, 10-2 over the Tigers to take the first two games of the series. Gary Sanchez stayed red hot in the win going 2-5 with a HR and three RBIs. The Yankees ace, Luis Severino, did not disappoint either, turning it yet another quality outing. 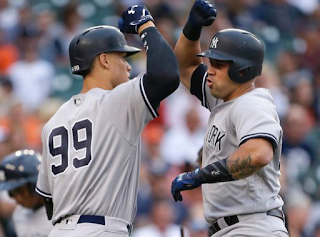 
Similar to last night, Gary Sanchez went yard in the top of the first to give the Yankees the early lead, although this was only a solo bomb.  Fast forward to the top of the third where the Yankees erupted for five runs, and again it was Sanchez driving in Jacoby Ellsbury and Ronald Torreyes with a two RBI single.  Also in the third, Aaron Judge, who ended his strikeout streak yesterday at 37 games, hit an RBI double to center scoring Aaron Hicks.  Didi Gregorius chipped in with a RBI single, which scored Sanchez, followed up by a Chase Headley sacrifice fly scoring Judge. 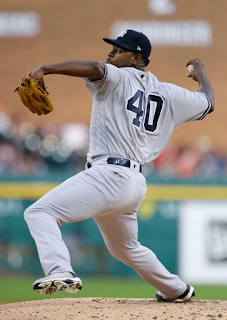 Later, in the fifth, Gregorius hit a solo shot extending the lead to 7-0.  In the sixth inning, Torreyes hit a RBI single scoring Todd Frazier, however, an Ian Kinsler solo homer in the bottom of the inning would get that run right back. Headley wrapped one around the left field foul pole in the seventh to make it 9-1 Bombers.  Hicks then got in on the action in the eighth with a RBI single scoring Brett Gardner.  Jose Iglesias made the game 10-2 in the ninth with a homer. It's also worth noting that he was the only Tiger not to strike out tonight. Luis Severino went 6.2 innings allowing 1 ER, with 8 K in the win. Chad Green and Tommy Kahnle combined for 5 K, giving the Yankees staff 13 on the night. 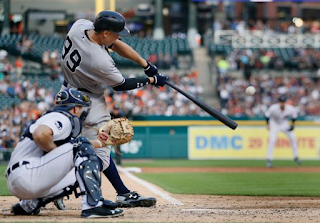 The Yankees have now put up 10 or more runs in both games so far this series, with everyone chipping in on the offensive side. Every Yankee starter was able to reach base in some form tonight, which should provide further encouragement for the unit moving forward