By Unknown - August 31, 2017
The magnitude of this series just got kicked up a notch. After getting within two and a half games of the division, the Yankees are now fresh off a sweep at the hands on the Cleveland Indians and looking up at a five and a half game hole in the division and a slim one game lead in the first wild card spot. As cliché as it is to say this is a “make or break” series, it truly is, as the Yankees are running out of games to lose. What is fortunate for the Yankees is that they have slated their better pitchers to go toe to toe with the Red Sox staff.

Ole reliable C.C. Sabathia takes the mound for the Yankees as they look to shake the sweep by the Indians and right the ship. C.C.’s last outing against the Red Sox was a six inning, four hit and two run effort after coming right off the DL. He followed that up with seven innings of one run ball, only giving up five hits in his no-decision against Seattle. C.C. has always seemed to shine brightest in tough spots and against the division rivals, so hopefully he will keep that going.

Eduardo Rodriguez has had much success against the Yankees, posting a 2.31 ERA and a 4-1 record against them. However, he is coming off a couple shaky starts where he has given up three or more runs. We will have to see if he continues his dominance tonight, or if the Yankees are able to break through and get some runs. 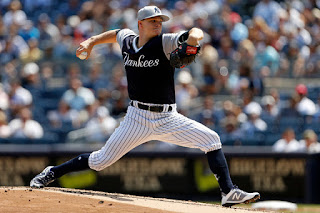 Still relatively new to the Yankees, Gray is beginning to get his feet under him and show the Yankees why they traded for him. He is coming off arguably his best start as a Yankee, going seven innings and only giving up a run, three hits and striking out nine against the Mariners. He has also fallen victim to not getting any run support from the Yankees, but hopefully the bats will help him out and he can build on his momentum.

While Tanaka has had an inconsistent year at best, he has been better of late. After a short DL stint for his shoulder, he came back and has given the Yankees two fantastic starts, lasting seven innings in both and only giving up a total of four runs. His last start was a ten strikeout gem, and his fourth quality start in his past five. Slowly but surely, he seems to be finding his way back and the timing couldn’t be better, as the Yankees need him to help them cross the finish line of the season.

Last time the Yankees faced Pomeranz, they only got to see him for 3.1 innings as he left with back spasms. This time it seems they likely won’t get such an abbreviated start, as he has bounced back from that game and pitched very well in his last two starts, going 5.1 and six respectively. He has had a very strong month of August, but as the calendar turns, the Bombers need to change that.

No doubt about this one, this is the game everyone has circled as the heavyweight fight. Severino has made his case all year to get some votes in the Cy Young race, but took a couple hits as he was not able to knock off Corey Kluber (another strong Cy Young candidate) and the Indians. Having to shake off that loss, and his absolute beating from the Red Sox last time he faced them, he has his work cut out for him. Make no mistake though, Severino will be out there for vengeance and will try and show the Red Sox why his name is mentioned with the guy they are putting out there on the mound.

Chris Sale has been everyone’s penciled in Cy Young since he started this year. Rightfully so, since he has been nothing but dominant all year and just became the youngest pitcher to 1,500 strikeouts. There have only had a couple blemishes on his near perfect resume this year. One of those blemishes is his record against the Yankees, somehow they are  3 -1 against Sale this year. Hopefully keeping with the trend and relying on their own Cy Young candidate, the Yankees can pull one out. 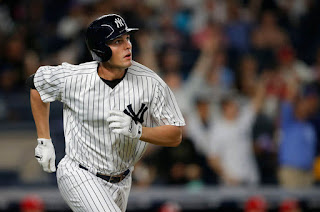 Greg Bird
After finally getting his foot injury straightened out, Bird finally returned to the Yankees lineup. In a small sample size, he has collected three hits and six RBIs, three of which came on a homer in the second part of the double header against the Indians. Bird is starting to look like him old self, and seems much more comfortable than in the first half of the season (much of which may be due to his injury). If he can get going and be a consistent face in the Yankees lineup, this would be huge. He not only adds another power lefty bat, but provides the Yankees with a true first baseman.

Gary Sanchez/Austin Romine
This will be a very interesting thing to watch unfold as both catchers have their suspension appeal hearings Friday. If both have to sit at some point in this series, it would bring possibly a Triple-A catcher in Eddy Rodriguez, or newly acquired Eric Kratz into the starting role. This is less than ideal for a team trying to grind out a playoff race against a divisional foe. Sanchez has also had a scorching hot month of August so having to lose his bat in the lineup is a big blow. We will have to wait with baited breath to see what the decision is Friday from the league.

Aaron Judge
After getting some days off to rest and get right physically and mentally, Judge had some success against the Indians. While in the box score it only shows one hit and one walk, with a run scored, he did seem to be a little more patient and composed at the plate. His shoulder has popped up as an item of concern, as lately he has a mountain of ice on it after every game. He continues to deny that his shoulder has been holding him back, so hopefully there is no concern with him in this series. After a nightmare of a second half, it would be great to see Judge collect some hits and step up in big moments to help the Yankees in their playoff dogfight. 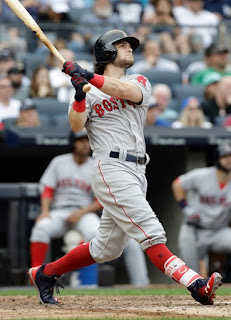 Andrew Benintendi
Benintendi is not only a rookie of the year candidate, but he is slowly becoming a Yankee killer. While the Yankees seemingly slowed him down some last series, only allowing him to get three hits and score twice, they don’t want him to get hot anytime soon. In the prior series, he dominated Luis Severino, taking him deep twice. Look for the Yankees to continue their careful approach to this young phenom.

Mitch Moreland
Moreland has been red hot of late, batting .474 with three home runs and nine RBIs in his last seven games. He will look to continue this in the Bronx. He has had success of late against the Bombers, so look for them to handle him carefully as well.

Rafael Devers
Another name that seems to not be going anywhere soon for Yankees fans. Now infamous for his homer off Aroldis Chapman, Devers has done nothing but produce for the Red Sox since coming up. He is hitting .294 with eight homers and 17 RBIs in only 31 games, very impressive for a guy who the Red Sox didn’t even consider in their lineup for 2017.

Conclusion:
Thursdays double header loss and sweep at the hands of the Indians has left Yankees fans questioning this team. As they hang on to a one game advantage in the wild card and a five and a half game deficit in the division, it is now time to put up or shut up for the Yankees. Divisional series are always tough, but with some seemingly favorable matchups and time running out, its time for the Yankees to get the job done.