By Unknown - August 27, 2017
The Yankees enter this series just 2.5 games out of the division lead, having won their last two series, taking two out of three from the Detroit Tigers and Seattle Mariners. The offense has been inconsistent as ever as of late, rotating between moments of run scoring explosions to innings on end of mediocrity. With the returns of Greg Bird and Starlin Castro this past weekend, the Bombers will hope to make a push for the division as the race for October heats up. A pivotal four game series against the Red Sox in the Bronx soon awaits the Yankees, but first they must do all they can to defeat the first place Cleveland Indians, who have been bitten by the injury bug as of late, presenting the Bombers with a prime opportunity to capitalize. 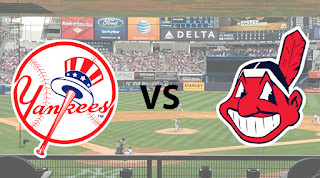 Facing off against Cleveland ace Corey Kluber will undoubtedly pose the biggest challenge of the series for the Yanks. However, with a fully rested bullpen and their own ace on the mound, the Yankees should stand a shot on their home turf. Kluber has been phenomenal this year for the Indians, going 9-2 with a 1.87 ERA in 16 starts since June 1. The Cy Young award winner dominated the Yankees in early August, striking out 11 and allowing only one run in a complete game performance. 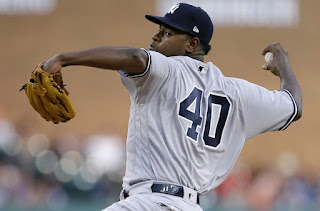 The Yankees will hope that their recently awaken bats will be able to put something together against one of the best pitchers in the league. If the Yankees are going to somehow steal a win, they're going to need Luis Severino to show up with his best stuff. Winning six of his last seven starts, with the exception of one start against the Red Sox at Yankee Stadium a few weeks ago, Severino has been dominant in the second half of the season. This will be a formative experience for the young ace who many expect will get the call should the Yankees have the (mis)fortune of playing in this year's American League Wild Card game.

Having not lost since July 16, Bauer will hope to continue this string of success at Yankee Stadium on Tuesday night. Bauer may not be the clear threat that his teammate Kluber is, yet he is a more than formidable foe for the Yankees. That being said, Bauer is hittable and has benefited from run support as of late.

The ever average Jaime Garcia has yet to win a game as a New York Yankee. Acquired prior to this year's non-waiver trade deadline, Garcia has been average at best since his arrival. Though he has consistently kept the Bombers in games, he hasn't done much to preserve leads. The Yankees will need to get more out of Garcia moving forward. Struggling to get through five innings is not going to cut it. Granted, Garcia is currently the fifth starter, but that does not warrant his mediocre performance. Look for this start to be a big test for the veteran lefty.

Out of the three games, Wednesday's is one in which the Yankees should enter as favorites. Josh Tomlin will be returning from a stint on the disabled list, where he has been since suffering from a left hamstring strain in late July. Having surrendered 19 homers in 20 starts this season, the Yankees will look to capitalize against Tomlin in homer-happy Yankee Stadium.

CC Sabathia has been quite effective in his two starts since returning from the disabled list, beating Chris Sale in Boston in the first, and being handed a no decision this past Friday against the Mariners despite throwing seven innings of one run ball. If the big guy can keep this up moving forward, and more importantly, stay healthy, the Yankees rotation is truly a force to be reckoned with. The Indians are a completely different team than they were when he left, however, it still has to be fun for players to face off against their former teams. Not that Sabathia needs any further motivation than pitching in a playoff race to elevate his performance, but such a factor may be something to keep an eye out for. 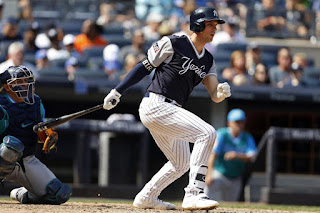 Since returning from the DL this past Saturday against the Mariners, Bird is 2-3 with two RBIs, two walks, and a run scored. This sample size may be small, but it's extremely encouraging. Considering the Yankees weren't expecting much out of Bird this season after he underwent surgery a few months ago, the organization must be excited to have his left handed power bat in the lineup moving forward. With Todd Frazier struggling at the plate, the Yankees now have even more options in the infield, which will allow the resurgent Chase Headley to shift back to his natural position at third on a more regular basis. Needless to say, Bird could be huge for the Bombers moving forward.

The Yankees got another big piece back this weekend in Starlin Castro. The second baseman hadn't played since July 21 due to a right hamstring injury that dates back to late June. With Castro presumably healthy this time around, getting his bat back makes the Yankees lineup even deeper. Utility infielder and .300 hitter Ronald Torreyes filled in more than admirably during Castro's time on the DL, but Castro is All-Star, whose presence was surely missed.

There is some uncertainly with Gary Sanchez entering this series. Following a dugout clearing brawl with Miguel Cabrera and the Detroit Tigers, Sanchez was suspended for four games. He, along with back up catcher Austin Romine, the recipient of a two game suspension for his role in the brawl, have simultaneously repealed their suspensions. In hindsight, this maneuver may turn out to be strategically unsound, but time will tell. Sanchez's appeal could be ruled on at any time, so it's likely he may miss time against the Indians, or even worse, the Red Sox next weekend. Regardless, the Yankees will be facing some 40-man roster decisions soon with this catcher's dilemma. Time will tell.

The Yankees must have been happy when Encarnacion departed the division rival Blue Jays for Cleveland this offseason. For the last few years, Encarnacion has killed the Yankees, particularly in the Bronx. The power hitting DH most definitely has that Yankee-killer gene in his DNA. Only seeing Encarnacion six times per year warrants sighs of relief, but the Yankees pitchers must be very careful this series. He can do a lot of harm real quick. 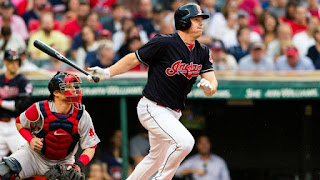 The Yankees nearly reached a deal with the Mets a few weeks ago to land Bruce, but negotiations fell apart due to the Mets insistence that the Yankees pay Bruce's entire remaining salary. Because of such frugality, the Mets had to take a lesser prospect package from the Indians than what had been offered by the Yanks. Since arriving in Cleveland, however, Bruce has raked. In 17 games, Bruce is hitting .311 with four homers and 17 RBIs. Bruce's left handed power swing is tailor made for Yankee Stadium so he will be another offensive threat to keep an eye on.

The Yankees enter this series with a lot on the line. Having gained a few games on the Red Sox in the division race over the weekend, the Bombers must stay the course and prepare for the pivotal series that lies ahead. The Indians are one of the better teams in the American League so winning the series won't be easy, but taking two out of three would be ideal. With star reliever Andrew Miller and starter Danny Salazar on the DL, the Yankees may have an opening to do just that.