The Yankees rebounded after an ugly four game losing streak by winning the last two games of their series with Cleveland, and remained in the first Wild Card spot, and three games back of the Red Sox in the division. It was a series that saw some cold Yankee bats throughout finally break through on Sunday. The Yanks will continue their seven-game road trip when they travel north of the border, facing the last place Toronto Blue Jays, who are seven games below .500 (52-59) and currently have one of the worst offenses in baseball. 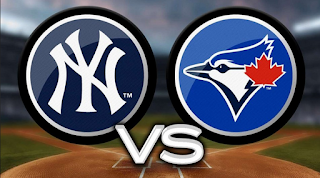 C.C. will open up the series on the mound for the Yanks, as he will be pitching on six days rest after losing his last start vs Detroit. C.C allowed two home runs in that start, and has given up three in his last two starts after not giving up any in his previous five. C.C has a 7.62 ERA in three starts against Toronto this year, but has had success against two of the most dangerous hitters in the Jays lineup, as Jose Bautista and Josh Donaldson are a combined 15-82 (.183) career vs Sabathia.

The Yanks lineup will face craft lefty veteran J.A Happ on Tuesday night, as Happ is having another solid season despite his bad record. Happ had a rough month of July, going 1-3 with an ERA of 5.00, but had one of his best starts last time out, going seven innings and giving up only one run. Happ also had a great start vs the Yanks on the Fourth of July, with his lone run given up being an Aaron Judge home run.

Masahiro Tanaka has been electric in his past two outings, striking out 21 batters in 14 innings and only allowing two earned runs. Tanaka has gotten his ERA below five for the first time since May, and has gone six innings or beyond in his last four starts. If Tanaka can continue this recent success, it could go a long way for the Yanks in terms of winning the division, and he will have another great opportunity to throw a gem against the Jays putrid offense. Tanaka has been great in his four-year career vs Toronto, as he is 8-3 with a 2.52 ERA in 12 starts.

Cesar Valdez is a relatively unknown 32-year-old pitcher from the Dominican Republic, who has only amassed 50.2 career innings in his two-year career, with a worrisome 7.64 career ERA. Valdez has six career starts, and is 2-2 with a 8.51 ERA in those starts. This would appear to be a great chance for the offense to have themselves a field day, but that may not be the case, as we saw this past week when the Yanks got to the Tigers best pitcher in Fulmer, but got shutdown vs Zimmerman and Sanchez who have both struggled this season.

Sonny Gray pitched well in his Yankee debut, and despite his defense completely faltering behind him, he managed to give his new team six strong innings with only two earned runs allowed. Gray will not have to face as treacherous of an offense as Cleveland in this matchup, as he will face the team he pitched against while a member of the Athletics for the final time. Gray did not allow an earned run to cross the plate in that game, yet his defense behind him was putrid much like it was in his first start with the Yankees. Gray has had a 1.48 ERA in his four starts since the All-Star Break, and will attempt to pick up his first win as a Yankee Thursday night.

After two stellar seasons as a Blue Jay, Marco Estrada has unraveled a bit in his third season, with a tremendous number of walks and a sky-high ERA since June. Estrada has pitched well in his last three starts, but still finds himself with hideous numbers in the last year of his contract. Estrada has three starts vs the Yankees this year, and after a shutdown performance on May 1st, Estrada has been battered in his last two meetings with the Yanks, giving up 13 runs in 8.1 innings, including four home runs. Estrada will need to prevent himself from giving out free passes if he wants any chance at his team getting the victory, as the Jays are 4-8 in his last 12 starts.

Don’t look now, but Chase Headley has quietly gotten his batting average back up to .271. It may not seem like a whole lot, yet it actually is when you consider Headley was hitting towards .230 in mid-June. Not only is Headley hitting well, but he has also shown he is a team player by moving to first base without any known complaints. Headley also stepped up in a big way this past weekend, as he delivered a clutch game winning home run in the eighth inning of Saturday's game, a game that the Yanks desperately needed. Headley continues to produce, as many of his teammates continue to slump.

The New York media ate up the story about Girardi calling out Gary and then benching him the next game, yet with the way Sanchez has played behind the plate, it is difficult to blame Girardi. Gary is victim to 12 passed balls this season, appears to not put in a whole lot of effort on balls in the dirt at times, and never seems to be on the same page as his pitchers, frequently taking visits out to the mound throughout the game. Sanchez has also shown terrible plate discipline of late, constantly flailing at pitches that bounce at home plate. Gary is still putting up decent numbers at the plate, yet his defense has been a liability to say the least. It will be intriguing to see how Sanchez responds to the benching and the criticism he has received of late in this three game series.

Justin Smoak is far and beyond the most dangerous hitter in the Blue Jays lineup this season, especially with big names such as Bautista and Donaldson having off years. Smoak has a career high 31 home runs this season that ranks fifth in baseball, and is hitting an impressive .299. Smoak has gone deep three times vs the Yanks this year, but has struggled mightily in his career vs Gray and Tanaka, a combined 3-34 against the two.

After battling injuries earlier in the season, Josh Donaldson has been trying to regain his previous form from years past, yet has not seemed to get there. Donaldson is hitting below .250 and only has 13 home runs, yet is still a lethal weapon that can go deep at any moment. Donaldson had a great series vs the White Sox last week, hitting a home run in each of the three games. Donaldson would be shut down in the series before this by the Astros, only mustering one hit in three games. Donaldson has not done well against the Yankees this year, yet not a lot of Blue Jay hitters besides Smoak have done well against any team.

The Yankees will attempt to take advantage of the last place Blue Jays in this series, as they will have some favorable pitching matchups and will soon be facing the division leading Red Sox six times in ten games starting later this week. The Yankee bullpen will try and continue to dazzle, as they won bullpen of the week once again, with Betances and Chapman both starting to look like their dominant selves again. The main concern for the Yanks is mainly getting injured players such as Starlin Castro, Aaron Hicks, and Matt Holliday back in the lineup, and also the fact that the bats must wake up. It may be a tough ask because both are so young an inexperienced, but hitters such as Judge and Sanchez must find a way to kick it back into their first half forms in preparation for the upcoming pennant race that the Yankees are right in the middle of.