By maxx - August 25, 2017
The Yankees fought their way out of Detroit with a series win and now head back to the Bronx to face Seattle. The Bombers are trotting out three of their better pitchers and need them to perform at their best if they want to come out of this series with a win. This is also MLB Players Weekend, the first time the Yankees will play without their pinstripes at home and will have nicknames on the back of their jerseys ever. I will give you some very biased opinions and ratings of the nicknames of the New York players mentioned in this preview. 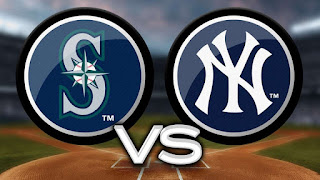 CC is coming off a big win against Chris Sale and the Red Sox on Saturday in his first start off the DL where he went six innings pitched with four hits, two runs, and four strikeouts. The veteran lefty may be down a few teammates if the MLB decides to levy suspensions after the brawls in the Tigers game, so another stellar game would go a long way in this series. (Dub is short for double, like double C’s. 6/10 rating, simple yet catchy).

Miranda pitched last month against the Yanks in a no decision where his team won 6-5 in Seattle. In his last three starts, the lefty has surrendered three, four, and six runs with four home runs and nine walks. On the season, he only has two outings of six innings or more, the Yankees should try to take advantage of the struggling starter.

In his last start, Gray had a shaky outing in Boston, struggling to put batters away, but only let up two runs in five innings pitched. The righty has only allowed two runs in every one of his Yankee starts and has shown to be worth the investment so far. Pickles has not pitched against Seattle yet this year but is 1-0 in the Bronx and if he gets help, he should have another great outing. (Pickles got his name because he couldn’t think of anything and just likes pickles. 4/10 rating, random but creative).

Gallardo struggled against the Yanks in their one meeting this year, letting up three runs and three home runs in five innings of work. The righty has struggled this month, owning a 7.78 ERA in the month of August and let up three, eight, and three runs in his last three outings. The ten-year vet has also let up ten home runs in his last six starts, which bodes well for the Yanks at home.

Tanaka has turned around his rocky start to the season but in his last 12 starts the starter has a 3.33 ERA and a .276 opponent OBP. In his last start against Detroit, he went seven innings with three runs, no walks, and three strikeouts. In the last game of this series, the Yankees need another great start from their original ace. (Masa is just a shortened version of his name. 4/10 standard nickname, but would’ve liked Tanaka Time instead).

Albers only has two starts this year, so his sample size is small. Thus far, the lefty has two wins and four earned runs in those starts. He possesses five pitches, fastball and sinker in the high 80s, changeup and slider in the high 70s, and a slow curve at high 60s. The scouting department of the Yankees need to show their worth for this type of matchup, and the players need to spend time watching tape on this pitcher.

The Yankee slugger finally ended his meaningless strikeout streak this week and looks to turn around his second half of the season. In the Detroit series, the right fielder went 3-8, three walks, two strikeouts, two RBIs, and a double. Hopefully, this is a not an aberration but the first step in the right direction. (1/10 rating, All Rise is his home run call and catchphrase, not a nickname. The Judge would’ve sufficed).

In his first series back from a lengthy DL stint, the second baseman is looking to get back to his All-Star ways. Ronald Torreyes has played amazing in his absence considering the circumstances, but Castro brings back some serious pop back into the lineup. The last time Castro came off the DL he reinjured himself and has kept him off the field till now, so that is something to watch this weekend. If Castro can be semi-productive and healthy the whole weekend, it is a successful return. (6/10. It’s a little bit forced, but I don’t mind it).

The former Yankee is having a productive year so far, batting .292 this season. The left fielder is cooling off sporting .156 batting average in the month of August. However, the lefty has a .333 batting average against his former team this season, and the Yankees seem to have players break out of slumps against them. The Yanks need to control their former prospect in this series.

The All-Star DH is having a great season as usual, with 31 home runs and .291 batting average. In their last series, the righty was 5-16 with only one RBI and no home runs, which isn’t half bad for the Yankee defense. In the hitter friendly Yankee Stadium, the Yanks need a repeat performance against the Mariners slugger to steal another series win.

After an emotional and much-needed series win, the Bombers need to start gaining momentum if they want to catch the Red Sox. With Starlin Castro returning, hopefully, the team can make up the lost production lost in the very likely Sanchez suspension. The club is most likely to be without a couple of key players from the Detriot brawl, but cannot afford to lose this series as they face Cleveland and Boston next.