By Unknown - August 14, 2017
The Yankees enter the Subway series stumbling after a stunning defeat Sunday night. The Bombers dropped two out of three to the Red Sox at the Stadium, falling to five and a half games out of first place. The Subway Series is always a fun time in New York. Though the Yankees are the only New York team in contention for a playoff spot this season, the Mets will certainly not roll over for their crosstown rivals. This will be a hard fought series, but the Yankees are going to have to find a way to beat an inferior Mets team before heading to Boston for a pivotal three game series with the first place Red Sox. 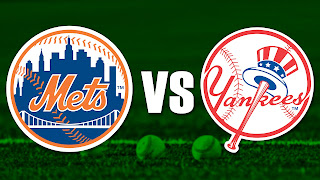 With CC Sabathia landing on the DL for the second time this season, the Yankees will call on Luis Cessa to make the spot start. Cessa has struggled during his time in the Majors this season. Having not won a game when filling in for Sabathia during the latter's first stint on the DL, Cessa will hope to find success this time around. One bright spot for Cessa, however, was his last Major League appearance on July 30 against the Rays. Coming on in relief, Cessa tossed three and one third scoreless innings, though he did walk four during that same appearance.

Cessa will be facing off against Rafael Montero of the Mets. Montero has struggled for most of the season, and earned the ire of many Mets fans. The Bombers may have to turn this one into a slugfest in order to emerge victorious. With Cessa on the mound, the Yankees offense must be ready to score. For an offense that has been slumping for the majority of the second half, facing a subpar starter and team that is out of contention may be just what it needs to wake up. Needless to say, this is a game the Yankees should win. 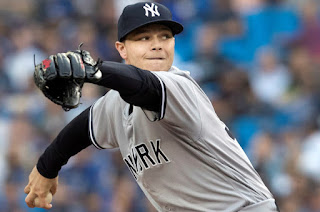 While chances are the first game of the Subway Series turns into a slugfest, game two will likely see the starting pitchers play a bigger role. Sonny Gray will take the mound for the Bombers, hoping to earn his first victory since being traded to the Yanks on July 31st. During his first two starts as a Yankee, Gray saw his defense fail him. In both starts, Gray lasted six innings, and surrendered only two earned runs. The Yankees acquired Gray to pitch big games in the pennant race. If the Yankees offense can manage to muster some runs together against deGrom, Gray will do his best to keep the team in the game.

Unfortunately for Gray and the Yankees, they'll be facing off against the Mets' ace, Jacob deGrom. In a down season for the Mets, deGrom has been one of the few bright spots, putting up ace caliber numbers. With Noah Syndergaard and Matt Harvey on the DL for most of the season, deGrom has had to step up and lead the Mets' rotation. The Mets may be out of the race in the National League, but they will never roll over for their cross town rivals. deGrom will bring his best stuff to the Bronx on Tuesday, so the Yankees must capitalize on whatever mistakes he makes. This game will be a challenge, but the Yankees are more than capable of coming away with a win.

On Wednesday, the series shifts over to Citi Field for the final two games. Prior to acquiring Gray, the Yankees made a trade with the Twins to land Garcia. While the latter lacks the upside of the former, he's a competent middle of the rotation starter. Garcia's first two starts as a Yankee have been lackluster at best, so this will be a key start for the veteran left hander. The Mets lineup is nowhere near as talented as that of the Indians or Red Sox so this game presents Garcia with an optimal opportunity to prove his worth as a Yankee. Having pitched in the NL for most of his career, Garcia will be in familiar territory having to carry a bat.

In a year that the Mets have seen their rotation decimated by injuries, Lugo has been attempting to establish himself as a part of the team's future. It's been an up and down year for Lugo, however. While he's shown flashes of brilliance at times, he's also been quite hittable at others. With Lugo, it truly is hit or miss. Similar to game one, this is another game that the Yankees have to win. The Bombers are the superior team at this juncture so they must do their best to win the games in which the pitching matchup favors them.

During his last start against the Red Sox this past Saturday, Severino got rocked for the first time in a long time. After having some defensive miscues occur behind him, Severino failed to make the big pitch multiple times, allowing the Red Sox to put up two five spots. Severino allowed a career high ten runs, though two of them were not earned. It is imperative that Severino, who has emerged as the Yankees ace this season, get back on track against a subpar Mets team.

The Mets will send the Long Island native Steven Matz to the mound in the final game of the 2017 Subway Series. Matz, who spent the entire months of April and May on the disabled list, has been able to stay healthy since June. Putting his disappointing performance this season aside for a second, Matz has shown that he has the talent to make it in the Majors, but he's struggled to stay healthy throughout his career. The Mets are probably thrilled that Matz has stayed on the field for three months straight (I'm not being hyperbolic here). Matz is coming off of his first quality start since July 3rd, so he may be on the verge of turning it around, or at least the Mets hope that ends up being the case. 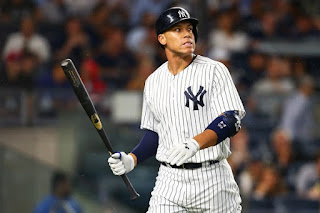 This will be Aaron Judge's first taste of the Subway Series. His magical rookie season may have cooled off since the start of the second half, but it's only a matter of time until Judge breaks out of his prolonged slump, or so we should hope. The environments at both Yankee Stadium and Citi Field will likely be electric so maybe this is the stage that Judge needs to finally get it going again. Judge's bat is perhaps the most important in the lineup. When he was hitting, the Yankees were winning. It's that simple. If he can get it going again, the Yankees chances of going on a playoff run increase dramatically. If not, this Bombers team is in serious trouble, and could very well end up on the outside looking in come October.

This will be the New Jersey native's first exposure to the Subway Series as a member of the New York Yankees. Having been raised in the tri-state area, Frazier knows how intense these matchups can get for fans of both clubs. It's obvious that Frazier is enjoying his time in the Bronx. What better way to make a lasting impression than stick it to the crosstown Mets? Frazier is clearly not the same player that he was for the Reds a few seasons ago, but he has to be better than a .220 hitter. The Yankees are hoping that's the case... 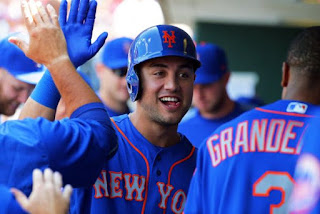 This season has started a hot debate between Mets and Yankees fans over which outfielder is better, Aaron Judge or Michael Conforto. At the conclusion of the first half, and especially after his dominant Home Run Derby victory, the answer was clearly Judge. The second half, however, has reopened this discussion. With Judge seemingly lost at the plate as of late, and Conforto trending upwards, it will be worth watching to see if some friendly competition emerges. One thing is for certain. Both Conforto and Judge are talented and exciting young players who will be playing in New York for years to come. This is most definitely not the last they'll see of each other.

When the Mets come to town, Cespedes is always a guy to keep your eyes on. Since arriving to Flushing, Cespedes has been a hot topic, whether that be for good or bad reasons. Cespedes has gotten some big hits for the Yankees and played an integral role in their 2015 trip to the World Series. On the other hand, he's also given the club their share of headaches. Most recently, Cespedes stated that he wants to finish his career in Oakland, even though he just signed a deal to remain with the Mets this past offseason. Needless to say, Cespedes is an incredible talent and the Yankees pitchers must do all they can to keep him in the ballpark.


Though many don't consider the Yankees and Mets to be true rivals, these two clubs have had some tense exchanges over the years. This season, however, the Yankees are contenders and the Mets are not. These four games serve as a buffer between two series against the division leading Red Sox. The Yankees know this, and they have to take at least three out of four from the Mets, especially after dropping two of three from Boston at home. Even a split would be disappointing. This is the time of year where the Yankees have to beat up on bad ball clubs. The Mets fall into this category. If the Yankees can't fulfill this goal, they'll have a hard time making it into the postseason.